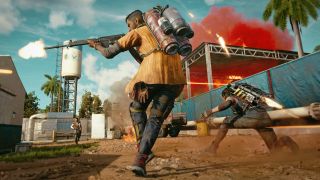 AMD has expanded its offer to give away free copies of Far Cry 6 and Resident Evil Village to include its flagship GPU, the Radeon RX 6900 XT.

Previously, this ‘Raise the Game’ bundle was only available to people who bought both a Ryzen CPU along with an RX 6000 GPU together in a qualifying system. However, now those buying just an AMD graphics card can grab both of these high-profile games for free, at least if they purchase an RX 6900 XT as mentioned.

There is a slight caveat, namely that buyers of both a CPU and GPU also get a three-month trial of Xbox Game Pass, whereas that additional incentive doesn’t apply with the 6900 XT offer. Just something to bear in mind.

The bundle is now available with any RX 6900 XT card, including third-party or reference models, as Tom’s Hardware reports, and the offer runs from now until December 31, 2021. It is, however, only available to buyers in the US and Western Europe at participating retailers.

Analysis: The Big Navi GPU with the big price tag…

Those two games are great freebies, of course – well, Far Cry 6 isn’t out just yet, but it’s looking very promising for PC gamers when it emerges on October 7 – so it’s good to see AMD extend this offer to the buyers of standalone graphics cards.

That said, it’s slightly disappointing that the only GPU which applies is the most expensive Big Navi product, as it’s truly eye-wateringly expensive (a quick scan of online retailers indicates current pricing starting at around $1,700 in the US, or £1,500 in the UK, for those models which are actually in stock, of course).

It’s also worth bearing in mind that Far Cry 6 comes complete with a major boost from AMD’s FidelityFX Super Resolution, and according to the firm’s own testing, frame rate leaps of over 40% are possible with FSR tech. Pretty cool indeed, and with the power of the 6900 XT, the game should run very impressively.