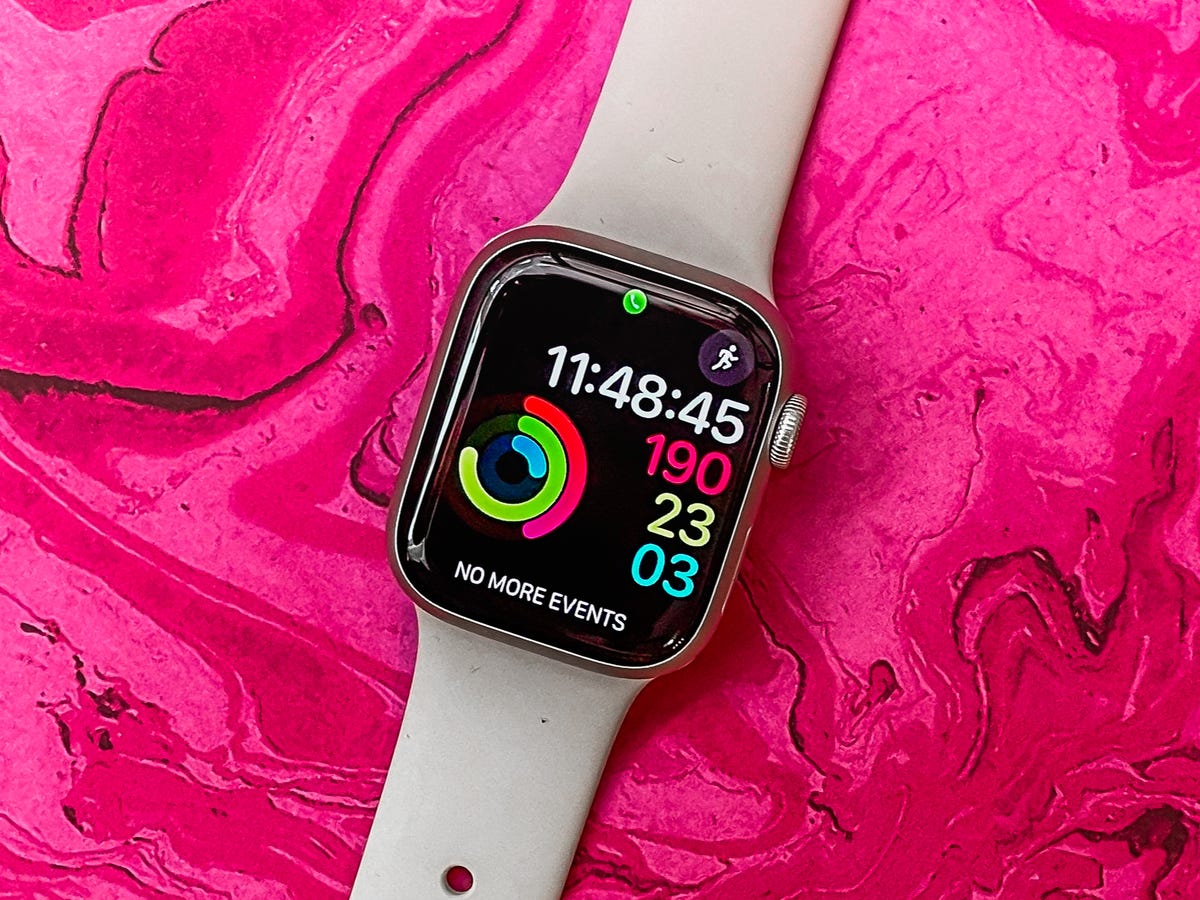 Apple may launch an Apple Watch Pro for the first time, according to reports from Bloomberg.

It would be the first time Apple has launched an Apple Watch that caters to a specific audience.

Apple is holding an event on Sept. 7 where it’s expected to announce new Apple Watches and iPhones.

Apple may soon add a new Apple Watch to the mix: The Apple Watch Pro. Reports from Bloomberg and other sources suggest Apple will launch a high-end Apple Watch marketed towards athletes with a larger display, sturdier design and longer battery life. If Apple does plan to release an Apple Watch Pro this year, we’ll likely find out about it at the company’s “Far Out” launch event scheduled for Sept. 7.

Launching a Pro version of the Apple Watch would be a wise move for Apple. Smartwatches like the Apple Watch are loaded with health and fitness features — some of which are more useful for sports enthusiasts than casual exercisers. An Apple Watch Pro would allow the company to reach those who are willing to pay more for extra durability while still offering more affordable options for people who’ll be satisfied with a more basic experience.

Here’s everything we know so far about what to expect from the Apple Watch Pro ahead of Apple’s event next week.

Among the biggest questions is what this new Apple Watch version will be called. There’s a chance Apple could call it the Apple Watch Pro, since it fits with the naming convention Apple has used for other products like the iPhone, AirPods, the iPad and Mac computers.

But an early Bloomberg report also said the watch was being called the “Explorer Edition” internally. Since Apple has launched special watches in the past under its Nike and Hermes collections, the Explorer Edition doesn’t seem like a stretch. Bloomberg’s Mark Gurman also speculated that it could be called the “Apple Watch Extreme” or “Apple Watch Max.”

The Apple Watch Pro’s bigger and more durable build is expected to be the biggest way it stands out from the rest of Apple’s lineup, according to Bloomberg. The Pro is expected to have a display that measures almost 2 inches diagonally and will have about 7% more screen area than the Series 7, reports Bloomberg. Ross Young, analyst and CEO of Display Supply Chain Consultants also tweeted that a new Apple Watch with a larger 1.99-inch display is in the works.

Apple will also outfit this new Pro version with a “strong metal material” rather than aluminum and a “shatter-resistant screen,” according to Bloomberg. That could make it more appealing for those who frequently go hiking or rock climbing or work in harsh outdoor conditions.

We might see other design changes, too. Japanese tech blog Macotakara reports that the new Apple Watch will have a flat design similar to the iPhone 13 Pro.

The Apple Watch Pro will also have longer battery life compared to the standard Series 8 we’re expecting to see this fall, according to Bloomberg. However, the report didn’t specify the precise battery gains we might see, other than saying it will allow users to track workouts for longer periods of time. That would be a big deal for outdoor runners, considering tracking runs with GPS is known to be a battery-drainer for smartwatches in general. It could also be more useful for those who plan to track their sleep with an Apple Watch.

Bloomberg also previously reported on a new low-power mode for the Apple Watch that was expected to debut with WatchOS 9. We didn’t hear anything about it at Apple’s Worldwide Developer Conference in June, but there’s a chance Apple could mention it at its upcoming event.

The Apple Watch Pro sounds like it will be a more advanced version of the standard Series 8, meaning it will likely have the same health sensors and workout options. That means it will probably have the rumored temperature sensor planned for the Series 8, reports Bloomberg, and the ability to take an ECG and measure blood-oxygen levels from the wrist.

But the Apple Watch Pro may have enhanced hiking and swim tracking, says Bloomberg. That would make sense considering this watch will likely be tailored for sports enthusiasts.

Apple has been rumored to be developing satellite connectivity for the iPhone, which would enable it to send emergency texts even when cellular coverage isn’t available. We don’t know if this feature will debut with the iPhone 14, although Apple’s space-themed “Far Out” event invite has certainly sparked speculation that such an announcement may be imminent. Bloomberg’s Mark Gurman also wrote in his Power On newsletter that Apple has internally discussed bringing satellite connectivity to the Apple Watch. He added that it would be a good fit for future Apple Watch Pro models, although it’s unclear if he’s referencing the Apple Watch Pro we’re expecting to see on Sept. 7 or a next-generation model.

Either way, Bloomberg’s reporting isn’t the only sign suggesting that satellite connectivity might be coming to upcoming Apple products. TF International Securities analyst Ming-Chi Kuo reports that Apple has completed hardware tests on the iPhone 14, but its launch will depend on whether Apple has settled on a business model for bringing satellite communications to the iPhone.

Apple typically announces its new Apple Watch lineup alongside its new iPhones in September, so we’re expecting this year to be no different. Similar to the way Apple unveiled the iPhone X alongside the iPhone 8 and iPhone 8 Plus, Apple could announce the Apple Watch Pro alongside standard versions of the watch, reports Macotakara citing sources in China.

The Apple Watch usually launches shortly after Apple’s event, but there have been exceptions. For example, Apple announced the Series 7 on Sept. 14 but didn’t launch it until Oct. 8. That’s a departure from the Series 6’s debut in 2020, which launched on Sept. 18 after being announced on Sept. 15.

Although we won’t know for sure until Apple makes an announcement, we can probably expect the Apple Watch Pro to be more expensive than the regular Series 8 given its additional functionality. If Apple maintains the same pricing structure as the Series 7, the Series 8 will likely start at $400 for the non-cellular aluminum model. Since the stainless steel Series 7 starts at $700, we can likely expect the rumored Pro to cost more than that since it will likely be made of a more durable premium metal.

We’re expecting to find out more during Apple’s event on Sept. 7. Aside from new Apple Watch models, Apple will likely announce the iPhone 14 lineup and possibly the rumored AirPods Pro 2.