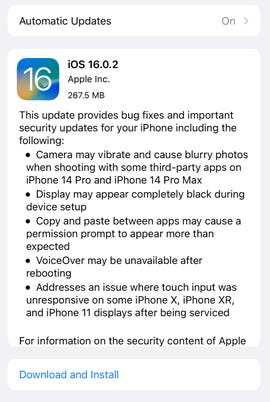 Apple on Thursday released the iOS 16.0.2. The update, which comes about two weeks after the launch of iOS 16, fixes a handful of bugs and issues iPhone users have reported.

The update fixes a camera shake issue some iPhone 14 Pro and Pro Max users have experienced when they accessed third-party apps like Snapchat or TikTok. Apple originally said an update to fix this issue would be made available next week.

Other issues the update fixes include some iPhone screens going black during device setup and copy-and-pasting between apps causing permission prompts.

The update is available for all eligible iPhones, not just iPhone 14 models.

This update comes about a week after Apple released the iOS 16.0.1 update. That update reportedly fixed FaceTime and iMessage bugs with iOS 16 that some users experienced.