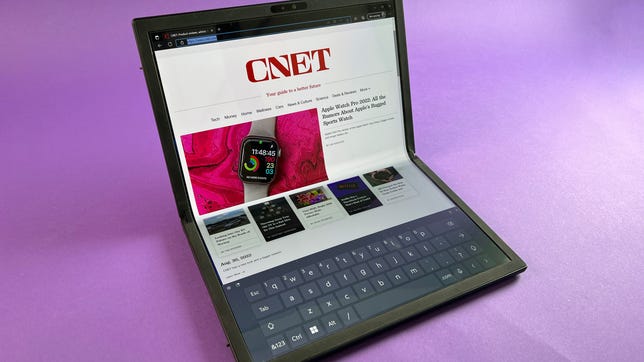 The Asus Zenbook Fold is a true transformer of a PC. It’s equal parts tablet, laptop and desktop, and unlike many other hybrid products, it’s pretty good at all three. The key is a big 17-inch foldable display, even if that technology is still in its early days.

Folding-screen phones, like the Samsung Z Fold and Z Flip, are well into second- or third-generation hardware and have steadily improved since their initial release. But folding screen laptops like the Asus Zenbook Fold are still mostly first-gen — gen 1.5 if we’re being generous.

I say generation 1.5 because it comes roughly two years after the first folding screen laptop went on sale, the Lenovo X1 Fold. And while the Asus version makes some improvements and offers some upgrades over that early Lenovo iteration, it carries over many of the same shortcomings.

The biggest leap here is in the display. In the new Asus foldable, it’s a 17.3-inch screen, and even better, it’s a 2,560×1,920 OLED display, which is great for both image quality and battery life. Yes, as a flexible screen, it’s basically OLED under plastic, which isn’t always visually ideal, but it looks great as a 17-inch OLED tablet.

And it had better look great. This is a 17-inch laptop with a 12th-gen Intel Core i7 U-series CPU, 16GB of RAM and a 1TB SSD, and which costs $3,500. At that price, this is what we used to call a CEO laptop — the kind of prototype-ish expensive machine that the CEO of a company would insist on having just to show off, but that the rest of us wouldn’t be able to justify.

But despite with the early-adopter tax, it’s still a visually stunning product that’s tremendously fun to use, and it opens the door to a very interesting possible future for portable computers.

Even with the giant OLED display and current-gen CPU, the ZenBook Fold reminded me of the original Lenovo X1 Fold in many ways. Both have clamshells that don’t fully close, leaving a gap when folded shut. The included physical keyboard slips into that gap, but it’s awkward and makes the system very thick and clunky when fully folded. Similarly, the screen bezel is huge, and that makes it feel dated. Newer folding-screen laptops are coming, and some will reflect newer designs, while the Asus Fold feels like it was built from the same basic proof-of-concept as the original Lenovo X1.

Three (or more) devices in one

My favorite feature is the Fold’s ability to transform into several different devices. It can be a portrait-style 17-inch tablet or a landscape 17-inch all-in-one PC when you use the built-in kickstand and put the tiny included keyboard in front of it. It can be a 12.5-inch clamshell laptop with the physical keyboard laid over the lower half, or it can be a 12.5-inch laptop with an on-screen keyboard and plenty of flexibility on where to place windows across the top and bottom halves.

Of these, the most impressive is the full 17-inch all-in-one PC mode. It’s a great size for seeing more or making docs and web pages larger. The kickstand has a tiny bit of adjustability, but you’re mostly looking at a screen tilted slightly back.

I also found the ZenBook Fold to be a great portable screen for watching TV and movies in bed. Yes, it’s a bit hefty, and frankly overkill for a bedroom media player, but I loved having access to a big screen, and the OLED display looked fantastic.

The biggest issue people have with folding screens is the actual middle fold, which you can almost always feel with your finger and can usually see. The Fold had the same issue, but at least in movie-watching mode, I can say that I never saw it and it didn’t interfere with my media consumption experience at all.

As a smaller-screen laptop, this is a big, heavy, expensive way to have a 12.5-inch screen. But I found myself flipping back into that mode while writing this review, because I just wanted a traditional clamshell experience for a while. But if that’s all I wanted, a 4-pound, 34mm thick laptop wouldn’t be my first choice.

We’ve discussed the possible integration of laptops and tablets for many years. And while we’re still far away from a grand unified theory of personal computing products, this is a big step toward the idea that you’ll eventually be able to carry around a single screen that essentially changes size and function at will.

Windows 11 just isn’t built with folding screens in mind, and both Asus and Lenovo have had to shoehorn in custom functionality to make things work. Flipping between landscape and portrait orientations, you get a brief on-screen prompt to pick how your windows will be arranged, but it’s hard to trigger that prompt at will, and its options feel limited or don’t always behave the way you’d expect.

The included keyboard snaps on magnetically to the bottom half of the screen, or can also be used unattached as a Bluetooth keyboard. The keyboard is merely OK for typing, and the touchpad isn’t as sensitive or precise as the best true laptop touchpads. It also frequently failed to connect automatically and often required me to flip the keyboard’s power off and on to force a connection. It’s a bit like the keyboard on a Black Friday doorbuster laptop.

When not using the physical keyboard, a custom on-screen keyboard is supposed to pop up when in clamshell mode. Sometimes it did, sometimes it didn’t. I had to go into the system settings to add an icon to the task bar to call it up at will.

Asus does have a nice customization app that lets you choose the keyboard color and style, including a smaller swipe-typing version that feels easy to use. But the default on-screen keyboard does not include a touchpad, which makes it harder to use than the physical keyboard. Windows has a built-in virtual touch which you can access through the settings menu, and both can be used together, but it’s not ideal.

The keyboard and system both charge via USB-C, and the Windows Bluetooth menu was the only place I could find to monitor the keyboard’s charge level. It would be cool if the keyboard could charge by induction while seated in place, but maybe that’s an idea for the next generation.

If you’re logging into Zoom or other video meetings, keep in mind that the camera will be at the top of the screen in clamshell mode but on the left edge in full landscape mode. Camera quality was just OK, but my fellow meeting-goers reported that my audio from the built-in mic was excellent. There’s also an IR sensor for facial recognition login.

Despite having a 12th-gen Intel Core i7 CPU and Intel Iris Xe graphics, this is not a performance system. Especially considering the high price, it’s going to feel slower than other similarly configured laptops.

Gaming is a nonstarter, except for the most basic casual games. However, with the big OLED screen and a game controller hooked up, it was a great cloud gaming rig, and I really enjoyed it as a portable screen for Xbox Cloud Gaming.

One bright spot was battery life. Streaming online video, the system ran for 9:41, which impressed me. Yes, many laptops will run longer, but considering this is a big-screen device that’s essentially a concept/prototype, that’s really pretty good.

Is the Asus ZenBook Fold a really interesting conversation piece? Yes. Does it fulfill most of its design promises? Again, yes. Should you buy one? Probably not, and by pricing this at $3,500, Asus thinks the same. This is an example of conspicuous consumption, probably best left to free-spending CEOs and social media influencers who like showing off new-but-impractical inventions.

But more importantly, it’s a clear window into the future of personal computing, and I would not be surprised to come back in 10 years and find we’re all using folding screen devices like this.