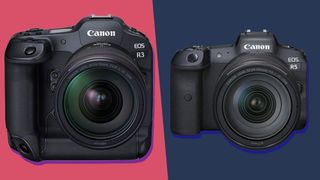 In a year when we’ve been treated to a wave of high-end cameras, we’ve been waiting for Canon’s full reveal of its hotly-anticipated EOS R3 since the development announcement back in April.

It technically sits in between the Canon EOS R5 and Canon EOS 1DX Mark III DSLR, but also contains the camera giant’s most advanced mirrorless tech so far. With an array of class-leading specs, it’s likely to be overkill for the average photographer – especially with its pretty eye-watering $5,999 / £5,879 / AU$8,599 price.

Still, there will undoubtedly be plenty of people out there who want the best that money can buy – although last year’s Canon EOS R5 is also pretty nifty in most scenarios, and is likely to be powerful enough for most.

With that in mind, here we’ll compare the two models across their key specifications and features to see exactly what you’ll get for the extra investment in the R3 – or whether it’s worth saving your cash and going for the cheaper R5.

Designed for professionals and action shooters, the R3 has a relatively modest pixel count of 24.1MP compared to the ultra-high 45MP resolution of the R5. But that lower count enables other things that the R3’s typical user will crave, such as blisteringly fast burst shooting and better low-light performance.

A new backside-illuminated stacked design is also present in the EOS R3, which ups the ante in terms of responsiveness and the speed of image capture – again something the professional snapper will appreciate most.

Both the EOS R3 and the EOS R5 offer in-body image stabilization (IBIS) which delivers up to eight stops of compensation (using compatible lenses) for sharp shooting handheld and in low-light conditions.

The EOS R5 is no slouch, but once again the EOS R3 kicks things up a notch by tweaking the already brilliant Dual Pixel CMOS AF II to deliver promised AF speeds of 0.03 seconds. Still, the EOS R5 provides 0.05-second autofocus, and that difference is unlikely to be observable in most real-world scenarios.

However, the EOS R3 also brings a host of other improvements to autofocusing, some of which sound almost science-fiction. Perhaps the most exciting is the addition of Eye Control AF, which as the name suggests allows you to change the AF point merely by looking in the appropriate direction. Wizardry!

For news, sports and action photographers, not having to mess around with physical buttons, joysticks or the touchscreen really could mean the difference between getting the shot and not. Although this sounds like cutting-edge technology, it’s interesting to note that we’ve seen this before, as far back as the 90s with Canon’s own film SLRs. Everything eventually comes back into fashion, right?

Other technical AF nous includes the ability to lock into focus at -7.5EV (very low light), an improvement from the R5’s -6EV (a bit brighter, but not much), and Deep Learning algorithms which you give the ability to track certain subjects such as vehicles, animals and humans.

You even get the kind of nuance that enables a distinction between a racing car driver’s helmet and the vehicle, taking much of the guesswork out of what would generally otherwise be an extremely tricky subject to nail.

All of that said, unless you actually are a F1 photographer, having all of this tech on board is very nice to have, but may very well go unused by the average photographer. The Canon EOS R5, meanwhile, still performs extremely admirably for more ordinary subjects, and is able to focus on the eyes of both people and animals.

Speed demon: it’s almost impossible to miss a shot with the R3 – but the R5 is no slouch either

Not only that, Canon promises that the traditional problems that can occur when using electronic shutters have been “all but eliminated” thanks to specs such as Flicker detection and High-Frequency anti-flicker shooting.

Both the R3 and R5 offer 12fps shooting when you switch to the mechanical shutter, but if Canon’s promises about that electronic shutter capability prove to be true, professionals may well be more than happy to stick with shooting using that.

Another massive benefit of the EOS R3 is the ability to shoot at super-fast shutter speeds up to 1/64000 second. The potential for capturing split-second action and truly freezing it is fantastic, and clearly steps above and beyond the R5’s 1/8000 sec; although again, it’s likely to be a niche requirement.

Connectivity: the R3 offers super-fast transmission for the professional user

It’s pretty much unheard of for a camera in a current lineup not to have some sort of wireless connectivity, and naturally both the R3 and R5 are fully hooked up with Wi-Fi and Bluetooth.

However, as ever, those pesky professionals demand just a little bit more, so you’ll find an inbuilt Gigabit Ethernet port for the R3, allowing for the super-speedy transfer of those all-important images that need to be transmitted instantaneously to news desks and the like via FTP over the fastest wired connections.

You can also access FTP servers wirelessly by adding the Wireless File Transmitter (WFT-R10), which is available as an accessory for either the R5 or the R3. Those who already have the EOS R5 and/or the EOS 1DX Mark III can share FTP settings seamlessly between their cameras if they have the WFT-R10, too.

Video: the R3 is a true hybrid camera offering 6K and oversampled 4K, while the R5 hits 8K

With video content often being equally important as stills content for professionals, the R3 needs to be able to handle the two equally well.

Although the R3 doesn’t have the headline 8K specification of the R5, it does offer a still above average 6K at 60p, as well as the possibility of recording oversampled 4K at 60p. The benefit of oversampling is usually that it brings greater detail and lower noise, so it’ll be interesting to see how it performs in real-world tests. The stacked sensor should also mean we see very little in the way of rolling shutter.

On top of that, you can also record 4K at 120fps with the R3, bringing slow-motion functionality which will certainly be a boon for action and sports photographers. Being able to shoot in CRM (Cinema Raw Light) is another benefit of the R3, helping to keep file sizes on the right side of manageable.

Although eventually improved via a firmware upgrade, the EOS R5’s issues with overheating while recording video made headlines for all the wrong reasons. That’s far less likely to be an issue with the R3, with its lower-resolution sensor and lower maximum resolution for video; indeed, Canon promises that the R3 can record up to six hours of “regular” video.

Essentially, both the R5 and the R3 are powerful video tools, but it’s the R3 which is likely to be considered the more practical all-rounder, particularly for those who are shooting multiple types of content.

EVF and screen: the R3 and R5 share similar viewfinders, but the R3 wins for screen resolution

Both the R3 and the R5 are packing almost identical 0.5-inch OLED electronic viewfinders, boasting 5.76m dots and 0.76x magnification. It’s a superb viewfinder that very much impressed us on the R5, and it’s hard to find a better one elsewhere (aside from Sony’s A1).

What the R3 adds here is OVF simulation View Assist, which gives you the option to check what’s going on outside of the frame, and will likely come in very handy for sports, action and news photographers who want to make sure they capture the action at exactly the right moment.

In terms of the screen, there’s a more clearly defined difference between the R3 and the R5. The R5 includes a very good 3.15-inch, 2.1 million-dot fully articulating touchscreen, but the R5 almost doubles that resolution with 4.1 million dots, pushing it not only well beyond the R5, but also above rivals such as the Sony A1.

It keeps the full articulation, which is useful for video shooters and for capturing shots from awkward angles, more so than a tilting screen, and much more so than a fixed screen, the like of which you’ll generally find on comparable DSLRs such as the Canon EOS 1DX Mark III.

Design: existing pros will feel very at home with the R3

Familiarity and a smooth transition is something that most pros upgrading to the latest camera will crave, and the good news is that that’s exactly what they’ll be treated to with the R3 if they’re coming from a 1DX Mark III.

The idea is clearly to tempt DSLR shooters over to the mirrorless side by providing them with essentially a smaller and lighter version of what they’re used to.

While it’s significantly smaller and lighter than the 1DX Mark III, the R3 bigger than the R5 due to its built-in grip. This is likely to be welcomed by a range of photographers who like to have vertical controls as well as horizontal, so the extra bulk is probably worth it for those users.

Additionally, the R3 is tougher than the R5, boasting a fully weatherproof magnesium alloy body constructed to the same standard as the 1D X Mark III. It also includes a higher-capacity battery than the R5 (the LP-E19, which is usefully the same as the battery in the 1DX Mark III), so it should last much longer in the field.

Both cameras have dual card slots, one each for CFExpress and UHS-II SD.

Accessories: the R3’s new Multi-Function shoe is compatible with a range of useful accessories

Canon brings a new feature to its mirrorless line with the Multi Function Shoe, which allows for high-speed two-way data transfer between the camera and any compatible accessory.

Already announced as accessories are the Directional Stereo Microphone (DM-E1D) and Speedlite Transmitter (ST-E10) which can draw power directly from the camera via the multi-function shoe.

You can use your existing accessories, as the hotshoe is the same size as Canon’s standard hot shoes, but you will need to purchase the Multi-Function Shoe Adapter (AD-E1) to make the whole unit fully weatherproof.

Again, as with many of the other specs mentioned here, the need for this kind of accessory compatibility will largely depend on the type of photographer you are and the type of work you do – not having these features on the R5 is unlikely to be a dealbreaker for most.

Price and availability: neither camera is cheap, but the R5 at least leaves you with some change from 5K

By contrast, the R5 retails for $3,899 / £4,199 / AU$6,899 body only – not exactly cheap either, but at least leaving you with some dough left over for a lens or two. For non-professionals, the EOS R5 definitely makes the most sense in terms of value and overall size.

On the face of it, there’s a lot more to the EOS R3 compared to the R5 – which is no less than you should expect for a camera aimed squarely at the professional user with a big budget to match.

That said, most of what the R3 brings to the table over the R5 is likely to be overkill for the average user, and even for many professionals.

While the R3 is ideal for sports, action and news photographers, thanks to its fairly modest pixel count coupled with its super-fast shooting speeds, those who shoot other subjects, such as weddings, landscapes and portraits, may feel short-changed by the lack of a super-high-resolution sensor.

Other features are very tempting nice-to-haves, such as Eye-Control AF and the ability to shoot at 1/64000 and oversampled 4K, but these aren’t necessarily deal-breakers for anybody.

Both the R3 and R5 are incredible cameras offering fantastic image quality and superb handling, and it’s clear that mirrorless is very much the future for all kinds of photographers – now pros will just have to hope that the global chip shortage doesn’t delay the R3’s full release, while the rest of us remain very well served by the R5.