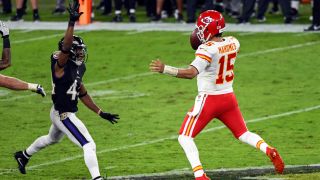 What a game we have in store, as Patrick Mahomes leads the Chiefs against Lamar Jackson’s Ravens. Banged-up Baltimore put up a heroic effort against the Raiders but fell agonizingly short on Monday, and this feels like a short-week matchup that’s come at precisely the wrong time for John Harbaugh’s men. It’s an all-star affair, so read on as we explain how to get a Chiefs vs Ravens live stream and watch NFL Sunday Night Football online from anywhere.

Despite those two costly fumbles, Jackson was something to behold in Vegas, slipping between bodies like liquid gold. He’s been criticized for his errors, but with star running backs J. K. Dobbins, Gus Edwards and Justice Hill out of action, he was carrying the team on his back.

KC showed signs of vulnerability against the Browns but sparked into life in the second half, Mahomes throwing for three touchdowns and running one over himself, and he was expertly aided by – who else? – those terrors Tyreek Hill and Travis Kelce.

Mahomes has a perfect record against all opponents in the month of September, and he’s never been beaten by Jackson, so the Baltimore crowd are going to have to play their part to keep their guys in it.

Follow our guide for how to watch the Chiefs vs Ravens online and get an NFL live stream wherever you are in the world right now.

Stream NFL without cable with Sling TV
Get your first month for only $10 now. With the game being shown on NBC tonight, cord cutters can watch with a Sling TV subscription. Sign up to Sling Blue now and shave a mighty $25 off the usual monthly price, while also scoring access to NFL Network, Fox, NBCSN, CNN, and 20+ more channels.
View Deal

How to watch Chiefs vs Ravens from outside your country

Use a VPN to live stream Chiefs vs Ravens from anywhere

Chiefs vs Ravens live stream: how to watch NFL Sunday Night Football in the US

The Chiefs vs Ravens game is being shown by NBC tonight, which is the home of Sunday Night Football this season.

Kick-off is scheduled for 8.20pm ET / 5.20pm PT, and if you have the channel as part of your cable package, you can also live stream the game directly through the NBC website.

How to watch Chiefs vs Ravens FREE without cable

The obvious first port of call for cord cutters wanting to watch NBC’s NFL output is a Peacock TV subscription. Plans start from $4.99 a month (can be cancelled any time) and, as well as the football, give you access to the best that NBC has to offer on demand,

For a fuller OTT solution, great-value Sling TV is a great option for NFL fans. Its Blue package offers local NBC/NBCSN and Fox channels in most major markets, as well as NFL Network, thereby covering off a large number of NFL games including both primetime and local broadcasts, for just $35 a month. But right now you can get a whole month of Sling Blue for $10.

The costlier but even more thorough alternative is to get a FuboTV plan. Its standard plan costs $64.99 per month and includes Fox, CBS, NBC, ESPN and the NFL Network – all the channels you need to tune into every nationally televised NFL game in the 2021/22 regular season.

You also get the benefit of the fact that FuboTV has a FREE trial.

How to watch Chiefs vs Ravens: live stream NFL FREE in Canada

Tonight’s Chiefs vs Ravens game kicks off at 8.20pm ET / 5.20pm PT, and it’s being televised by TSN and CTV, both of which also offer streaming access either on a standalone basis or at no extra cost for subscribers.

However, Canadian NFL fans are some of the the luckiest in the world, as streaming service DAZN is showing the Chiefs vs Ravens along with every single game of the 2021/22 season, right the way through to the Super Bowl.

Plus, the FREE 30-day DAZN trial lets you try before you buy – essentially mean you can live stream Chiefs vs Ravens free of charge.

Chiefs vs Ravens live stream: how to watch NFL online in the UK

The Chiefs vs Ravens game is being aired in the UK on Sky Sports, with kick-off set for 1.20am BST on Sunday night/Monday morning.

How to watch Chiefs vs Ravens FREE: live stream NFL in Australia

The Chiefs vs Ravens game kicks off at 10.20am AEST on Monday morning.

Streaming service Kayo Sports is showing the Chiefs vs Ravens game too, and is the ideal option for those who don’t want the commitment of a lengthy (and pricey) contract.