Cobra Kai season 4: everything we know so far 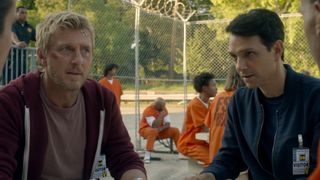 Cobra Kai season 4 will have a release date on Netflix in December 2021, it’s been confirmed. The Karate Kid sequel series moved from YouTube to the streamer for its third season, and became a monster hit – now it’s one of Netflix’s most anticipated returning originals.

Cobra Kai season 4 wrapped up filming in May 2021. Not long to wait now for the return of Johnny Lawrence (William Zabka), Daniel LaRusso (Ralph Macchio) and the series’ wider cast of younger characters. Netflix has another ace in the hole for season 4 – Karate Kid Part 3’s Terry Silver (Thomas Ian Griffith) will be part of next season’s arc, offering another fun deep cut from the movies’ history.

The fourth season is now in post-production, and executive producer Josh Heald hyped up this new run in a recent chat Deadline. “We have never been prouder of a season that we’ve put in the can. We’ve seen it and we know we’ve got the goods. We cannot wait for the fans of this franchise to see everything we did this season knowing everything we went through to put that into place. It’s an amazing memory we’ll all have knowing that it was a battle and we won.”

Here’s what we know so far about season 4. Beware spoilers for seasons 1-3 from this point on.

Release date: Cobra Kai season 4 will release in Q4 of 2021, Netflix has confirmed, so between October and December.

Cast: The vast majority of season 3’s cast is expected back for Cobra Kai season 4, along with Thomas Ian Griffith reprising his role as Kreese’s old army buddy Terry Silver, an addition to the series that’s been long anticipated.

When will we see a trailer? With the series expected to land before the end of 2021, we wouldn’t expect to wait too much longer to see a trailer for Cobra Kai season 4 – we’d be surprised if we didn’t see more of the show in action across the next couple of months.

Karate. Is. Coming.COBRA KAI will return with Season 4 this December. pic.twitter.com/hrOuBESyvSAugust 5, 2021

Cobra Kai will have a release date in December 2021, Netflix has confirmed. Check out the above teaser for more.

Cobra Kai season 4 started filming back in February 2021, and as of May 2021, it’s wrapped up. Star William Zabka marked the event on social media, showing off what phenomenal shape the 55 year-old actor is in – the show has finished filming after three-and-a-half months of production, which makes Netflix’s planned release date a dead cert.

Cobra Kai season 4 cast: who we expect to return and the new additions

Fans of the film franchise will remember Karate Kid III features multi-millionaire Terry Silver, a war buddy of Kreese’s who sends Kreese off to Tahiti after his embarrassment at the hands of Miyagi and Daniel LaRusso, before kicking off a plot to embarrass the pair of them. He fails, predictably.

Silver will seemingly be be stepping into Cobra Kai season 4 as a villain, however, after the end of season 3 of the show features Kreese making a phone call for reinforcements. While we don’t get more information than that, it’s now been confirmed that actor Thomas Ian Griffith will reprise his role as Silver for the first time in decades. Here’s a teaser:

Have patience. He’s just getting everything rolling. Terry Silver returns to the dojo for Cobra Kai IV. pic.twitter.com/gTI2QJl11GMay 27, 2021

As with everyone else in this universe, Silver is a karate expert and will probably make Kreese even more ruthless. “For now we’ll say we’ve been looking forward to working with Thomas Ian Griffith for a long time and we were very patient with ourselves to find the right moment, and season 4 is that moment,” co-creator Hayden Schlossberg told Deadline.

Who else could be joining the party for Cobra Kai season 4? Fans are definitely keen to see Hilary Swank coming back to play Julie Pierce again, the main character from The Next Karate Kid. Of course, whether or not she makes it back is an entirely different matter.

With Netflix now trickling out information about returning cast members, we’ve got a list of those we’re expecting to see below:

While there are no guarantees on who is returning outside of those announced, we’ve had another tweet from Netflix which promotes Peyton List and Vanessa Rubio to season regulars, and also announces two new faces.

The cast of Cobra Kai will now be joined by both Dallas Dupree Young and Oona O’Brien, both of whom will apparently be playing regular characters in the show called Kenny and Devon respectively. Kenny is a new kid at school who uses karate to fend off bullies, while Devon is a more competitive type, according to Variety.

a little more news – @veryvness and @peytonlist will be returning as series regulars, and we have some new faces joining us this season, Dallas Dupree Young and Oona O’Brien! pic.twitter.com/hnH0T6zLkwFebruary 26, 2021

Is there a Cobra Kai season 4 trailer yet?

Sadly, it’s a little too early for a Cobra Kai season 4 trailer right now, but you might enjoy this anime-style intro for the show built from old footage.

while this might not be a Cobra Kai anime announcement, it’s definitely a badass anime intro. pic.twitter.com/jkUI1nlaEpApril 2, 2021

Cobra Kai season 3 ending explained, and how it could factor into season 4

Towards the end of season 3, all of the sensible adults in Cobra Kai came together to cancel the All Valley Karate Tournament, arguing that the tournament probably isn’t worth teenagers hospitalizing one another. By this point it’s easy to forget that Miguel started season 3 in a coma, following season 2’s cliffhanger. Perhaps the adults in the room had a point?

It’s okay, though: after a rousing speech from Miguel and Sam about how much they wanted this tournament to go ahead, they got the all-clear and a bet between Cobra Kai, Johnny Lawrence’s new dojo Eagle Claw and Miyagi-Do was made. If Cobra Kai doesn’t win the All Valley Karate Tournament, it’ll disband. If it does win, they’ll continue with their current course and Kreese will remain sensei.

The run-up to this tournament will no doubt form the backbone of Cobra Kai season 4’s story, and it’s the most exciting the series has ever been.

If you thought the all-out riot at the High School that capped off season 2 was spectacular, the end of season 3 fight was smaller scale, but much more brutal. The Cobra Kai dojo invaded the LaRusso house to fight with Miguel, Sam, Demetri and the rest of the assorted Miyagi-do and Eagle Fang students who came together to discuss a truce. The result was a ton of kids laying waste to the LaRusso house while the adults were at the country club gala.

During season 3, Kreese recruited several school bullies to Cobra Kai, meaning their core group is even more sadistic than before. This brutality led to star Cobra Kai student Hawk breaking the arm of former best friend Demetri earlier in the season, and eventually he decided enough was enough. He chose to do the right thing with…yet more fighting, as he beat the assembled Cobra Kai students and defected to Eagle Claw.

At the end of his day with Ali, Johnny decided he’s ready to get serious with Miguel’s mother Carmen, and arrived to tell her only to find Miguel looking bloody after his fight. Johnny and Daniel go to Cobra Kai and scuffle with Kreese in the dojo, leading to them discovering that Johnny’s son Robbie is now a Cobra Kai student who wants nothing more than to get back at Daniel and Johnny.

The appearance, however, of Ali (Elizabeth Shue, reprising her role from the movie) saw her and Johnny reconcile and end things as good friends. That’s because she pointed something out to both Daniel and Johnny that Cobra Kai fans have been yelling at their screens for the last few seasons: both characters feel the other one is the bully, and feel unfairly targeted by the other. Perhaps both of them weren’t so well behaved in years past?

This revelation, and the alliance between Eagle Fang and Miyagi-Do, means that Daniel and Johnny are finally pals, and so are most of the original Karate Kids that joined Cobra Kai. The season ends with a real feeling of togetherness, a much more hopeful tone than we got for season 2’s crushing finale.

Cobra Kai has found its perfect home on Netflix. It’s the ideal binge-watch show, on a platform where it can find the audience it deserves – and three seasons in, fans are now deeply invested in this extension of a universe that was first introduced all the way back in 1984. Bring on season 4.