Cowboys vs Chargers live stream: how to watch 2021 NFL online from anywhere 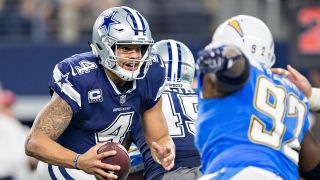 The Cowboys may have lost, but Dallas and Dak Prescott in particular impressed big time in week 1, pushing Tom Brady’s reigning champs all the way in a genuinely thrilling opening night. This clash with the Chargers could well be the game of the weekend, so read on as we explain how to get a Cowboys vs Chargers live stream and watch the NFL week 2 game online from anywhere.

A heroic effort ultimately went unrewarded, but the most painful thing of all for the Cowboys is that they may well have pull off the upset if it wasn’t for a CeeDee Lamb fumble.

Prescott threw for 403 yards and three touchdowns on a remarkable return to action from a career-threatening ankle injury and shoulder problems, and a shootout against Justin Herbert would sure be a whole lot of fun to watch.

The reigning rookie of the year took Washington’s acclaimed defense apart, and while it’s early days, Los Angeles’ new-look O-line already looks like a major upgrade, with Rashawn Slater impressing on his debut.

This could be a high-scoring contest, so follow our guide for how to watch the Cowboys vs Chargers online and get an NFL live stream wherever you are in the world right now.

How to watch Cowboys vs Chargers from outside your country

Use a VPN to live stream Cowboys vs Chargers from anywhere

Cowboys vs Chargers live stream: how to watch NFL in the US

Today’s Cowboys vs Chargers game is being shown on CBS, with kick-off scheduled for 4.25pm ET / 1.25pm PT.

How to watch Cowboys vs Chargers without cable

You also get the benefit of the fact that FuboTV has a FREE trial.

How to watch Cowboys vs Chargers: live stream NFL FREE in Canada

Today’s Cowboys vs Chargers game kicks off at 4.25pm ET / 1.25pm PT. Canadian NFL fans are some of the the luckiest in the world, as streaming service DAZN is showing it along with every single game of the 2021/22 season, right the way through to the Super Bowl.

Plus, the FREE 30-day DAZN trial lets you try before you buy – essentially mean you can live stream Cowboys vs Chargers free of charge.

Cowboys vs Chargers live stream: how to watch NFL online in the UK

The Cowboys vs Chargers game is being aired in the UK on Sky Sports, with kick-off set for 9.25pm BST on Sunday evening.

How to watch Cowboys vs Chargers FREE: live stream NFL in Australia

The Cowboys vs Chargers game kicks off at 6.25am AEST on Monday morning.

Streaming service Kayo Sports is showing the Cowboys vs Chargers game too, and is the ideal option for those who don’t want the commitment of a lengthy (and pricey) contract.