Deathloop didn’t initially click with me, but when it did… 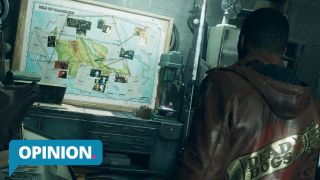 I didn’t initially know what to make of Deathloop. After reading a plethora of positive reviews, I was expecting to jump into Arkane’s time-looping FPS and to immediately be hooked. But that wasn’t the case.

When I first started the game, it didn’t quite click. I couldn’t understand why it had garnered so much praise from peers and friends. I felt somewhat overwhelmed by information, handheld from objective to objective, and concerned that the whole game would follow suit. Fortunately, I was wrong.

Following advice from others to keep going, after a few hours, everything clicked into place. Suddenly Deathloop made sense and I’ve found myself enthralled ever since.

When I say it took a few hours for Deathloop to click, that’s how long it took me personally. There is a particular point, following a tutorial and some objectives to ease you in, where you’re finally set loose in the world to commit your murderous task of killing the game’s eight ‘Visionaries’ before midnight – when the time loop resets – and that’s when the real fun starts. But when you get there really depends on how much you find yourself exploring.

This assassination task isn’t an easy one and, looking back, I’m glad that developer Arkane Studios eases you into the world of Blackreef the way that it does. But, in the first few hours, I wasn’t quite so pleased.

You’re fed a fair bit of information on Deathloop’s various features, from its ability slabs, to weapon trinkets, to important story elements. All this while Julianna, who is gunning for protagonist Colt, incessantly berates you over the radio. Even after the tutorial, you’re following a one-track objective, which sees you going from A to B, then back to A, before going back to B. At that point, it felt almost as though all these features at my disposal were going to be wasted on what appeared to be a game that simply handheld you through its story.

But Deathloop’s beginning, while frustrating initially, really just serves to introduce you to Blackreef and to let you get to grips with the elements which will ultimately serve in your overall quest: to kill the Visionaries. They allow you to get a feel for the fantastic gunplay, the hostile Eternalists who roam each region and what your particular playstyle is, before the game opens up and you embark on your real, more enjoyable, mission.

Once Deathloop stretches its proverbial legs, allowing me to have more freedom and get stuck into the task at hand, I’ve found it hard to put down. What previously seemed like a straightforward affair has now become a game of wits that sees you collecting clues and completing objectives that each play a piece in a larger puzzle. Each piece of information you find has its place, it’s just up to you to fit it together.

While at times, the task at hand may seem overwhelming – especially when you consider the various times of day, locations and Visionaries –  Deathloop provides a tantalizing challenge. Every time I find a letter, I consider how it plays a part in what I already know. Each time I join two dots together, I find myself smiling in glee. It makes your brain work for the payoff.

But, saying that, Deathloop doesn’t provide an obscene challenge. There is some degree of hand-holding, perhaps too much at times, that tries to nudge you in the right direction – though I have found myself a bit stumped, flicking through my leads in an effort to calculate my next move. There’s also (unsurprisingly) a fair bit of repetition, the further along you get. Once you start retracing your steps in the same locations at the same times, encountering the same enemies, the initial impact of Blackreef begins to wear off somewhat – though I can’t help but want the final payoff of watching all the Visionaries hit the floor.

Deathloop isn’t going to necessarily be for everyone. Those who are expecting a first-person shooter may be disappointed by the stealth elements, while those who want a detective game may begrudge the nuisance of being invaded by Julianna. What I would say is to give Deathloop a chance beyond its first few hours – it paid off in abundance for me.