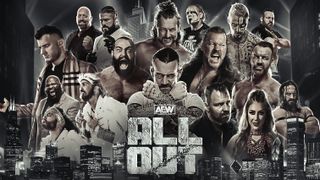 Former WWE Champion CM Punk makes his sensational return to the ring today under the All Elite Wrestling banner. But with Big Show’s AEW debut and a possible final ever in-ring appearance for Chris Jericho on the bill, too, this is set to be huge! Read on as we explain how to watch an AEW All Out live stream, wherever you are in the world.

There’s no need to pinch yourself, this is really happening. CM Punk didn’t exactly go out in a blaze of glory in 2014, but it was a glorious blaze nonetheless – the fan-favorite getting the hell out of dodge after feeling under-valued and let down by WWE

Vince McMahon’s loss is AEW’s gain, and Punk is set to headline an event that’s not exactly short of major storylines.

After more than 30 years in the ring, is this really it for Chris Jericho? Can The Young Bucks retain their title against those Lucha Bros? And of course, there’s also the not insignificant matters of the Women’s World Championship match between Dr. Britt Baker, D.M.D. and Kris Statlander, and the World Championship showdown between Kenny Omega and Christian Cage.

It’s a mouth-watering line-up, so read on for the full card and all you need to know to watch an AEW All Out 2021 live stream online from anywhere.

How to live stream AEW All Out from outside your country

Below, we’ve rounded up ways to watch AEW All Out in various countries around the world. But if you’re abroad and discover that your usual coverage is geo-blocked, then the only alternative that we know is to use a VPN to dial in to a country that does is showing the fight.

The software is perfect for this as it allows you to change your IP address and appear to be in a completely different location – and all through a safe, encrypted connection. Here’s how to get started.

Use a VPN to live stream AEW All Out from anywhere

ExpressVPN is the world’s top VPN right now
We’ve tested all of the major VPN services and we rate ExpressVPN as the absolute best. It’s compatible with loads of devices including iOS, Android, Amazon Fire Stick, PlayStation, Apple TV and such, and we found it secure, speedy and simple-to-use. Express is a do-it-all service that also benefits from 24/7 customer support.

Yep, ExpressVPN is the best all-round VPN for streaming – and perhaps best of all, it has a 30-day money back guarantee, plus 3-months FREE, when you subscribe for a year.

Once you’ve registered and downloaded the software, just follow the prompts to install it then select the location you want to relocate your IP address to – it really is that easy.

How to watch AEW All Out: live stream in the US

AEW All Out 2021 is a PPV affair, and you can tune in on Bleacher Report’s B/R Live streaming service, which is home to every All Elite Wrestling pay-per-view event.

You can stream B/R Live on a range of devices, including Android and iOS handsets, computers and laptops, and compatible Roku streamers, and you also get unlimited re-runs for 72 hours.View Deal

How to watch AEW All Out: live stream in the UK

Fans in the UK will be able to catch an AEW All Out live stream using Fite TV. At roughly £15 (the website actually prices it at $19.99), things are looking a far bit cheaper in the UK than the US.

You’ll be able to stream through Fite either within your browser or through the iOS and Android apps. Head here to sign up.

Prepare for a late night though, with the main action set to get underway at 1am BST on Sunday night/Monday morning (the pre-show starts at midnight).

If you nod off before then, you’ll be glad to hear there’s unlimited reruns available with this PPV purchase as well.

Not in the UK? You’ll need a VPN to watch this live stream as if you were back at home

How to watch an AEW All Out live stream in Canada

All Elite Wrestling fans based in Canada can also tune into AEW All Out on B/R Live, with the PPV event priced at US$49.99, which is around CA$63.

The pre-show gets underway at 7pm ET / 4pm PT, ahead of the 8pm ET / 5pm PT Sunday evening start.

You can stream B/R Live on a range of devices, including Android and iOS handsets, computers and laptops, and compatible Roku streamers, and you also get unlimited re-runs for 72 hours.

And if you’re abroad right now, don’t forget that you can still tune in just like you would at home with the help of a good VPN. View Deal

How to watch AEW All Out: live stream in Australia

The Fite TV streaming service is also showing AEW All Out as a pay-per-view event Down Under.

The main event is set to start at 10am AEST on Monday morning, but the pre-show gets underway an hour earlier, at 9am. If that’s a little too early for your liking, Fite also includes unlimited reruns with the PPV purchase.

Out of Australia and need a stream of that PPV? Try a VPN to change your IP location so you can tune in as if you were at home.