How to watch Batwoman season 2 online: stream every new episode from anywhere 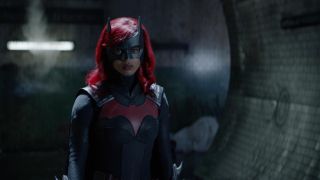 The Bat-Signal is getting lit up once again, but this time there’s a new caped crusader on hand to help wipe out crime from the streets of Gotham. The DC superhero show’s second series marks something of a reboot, with the introduction of Ryan Wilder, a new Batwoman played by God Friended Me’s Javicia Leslie. Read on for our how to watch Batwoman season 2 online and stream every new episode, including for free in some places.

While the first season followed Kate Kane, Bruce Wayne’s cousin as the justice-serving superhero, actress Ruby Rose’s shock departure means something of a major overhaul for the show.

Instead of recasting the character, the season premiere instead sees Kate go missing and explores the subsequent fall out among her allies, before tech support team Luke Fox (Camrus Johson) and Mary Hamilton (Nicole Kang) eventually turn to another hero-in-waiting to take up the Batwoman mantle.

Taking over the cowl is Ryan – a street smart, ex-con who is living out of a van after serving time for a crime she didn’t commit.

Leslie certainly sounds a great fit to play the sassy all-action new character, having come from a background in Muay Thai and having performed many of her own stunts for the new season.

The new series also introduces some familiar villains from the DC universe into the show, with Safiyah, the underworld ruler of Coryana and Gotham City crime boss Black Mask all set to feature as protagonists.

Read on as we explain how to watch Batwoman online and stream season 2 for free just after it airs on TV.

How to watch Batwoman season 2 online from outside your country

While the ongoing pandemic means that international travel might be limited, it’s still possible for many of us to visit countries on government ‘approved travel’ lists. For those abroad on business or getting some winter sun when Batwoman: Season 2 airs its final episode, you’ll be unable to watch the sci-fi mainstay conclude its epic run due to annoying regional restrictions.

Use a VPN to watch Batwoman season 2 from anywhere

How to watch Batwoman season 2 free online in the US

Those with a cable subscription can watch the Batwoman season 2 premiere live on The CW at 8pm ET/PT on Sunday, January 17. However, it’s only airing on linear TV at the time, becoming available for streaming a few hours later on Monday, January 18.

When it does, the good news is it’s 100% FREE to watch Batwoman season 2 online via The CW website – you don’t even need to register, just press play!

Of the many options, we recommend FuboTV for fans of Batwoman, as in addition to offering The CW as part of its core package of more than 100 channels, it also gives you a  1-week free trial – again making it’s possible to watch Batwoman free online. Should you like what you see and decide to keep it, the  cable replacement service costs $64.99 a month thereafter.

Outside of the US? Watch the Batwoman season 2 just like you would at home by summoning the powers of a good VPN.

How to watch the Batwoman season 2 online in Canada

Batwoman is being shown by the Corrus Entertainment channel Showcase in Canada. Sundays at 8pm ET are when you need to tune in to watch as it goes out, and you can catch up with all broadcast episodes on the network’s website or on the Global app.

Those with Showcase wanting to log-in to watch the service from abroad will need to download a VPN to connect like they would at home and usurp any geo-blocking they may encounter.

Can I watch Batwoman: Season 2 online in the UK

While Channel 4 was the home of Batwoman for last year’s opening season, its still hasn’t yet confirmed if and when the station will be showing the sophomore run of the comic hero show.

On top of that, season 1 has also been removed from the All4 streaming service, so if you want to catch up with Kate Kane’s exploits, you’ll need to buy episodes from a VOD platform like Amazon Prime Video.

Anyone in the UK from abroad that’s fully up-to-date with Batwoman might find this frustrating, but worry not. As we mention above, you can avoid regional blocks by checking out a VPN solution.

How to watch Batwoman season 2 free online in Australia

Those Down Under looking to emerge themselves in the shadowy crime-filled streets of Gotham may have a wait on their hands.

The first series was originally shown on Foxtel in Australia, meaning you could stream the show via a Foxtel Now subscription – or the more budget friendly service Binge.

While it looks like both options will be in play for season 2 of the show, its not been confirmed when either will have the new series available.

On the plus side, all episodes of season 1 remain available to watch on demand from Binge.  An entry-level package for the service is AU$10 for one stream in SD quality, but splash out a little extra and get HD viewing and up to 4 streams. There’s a substantial 14-day FREE Binge trial for new subscribers too, in addition to great content from FX, HBO, Warner Bros, and hundreds of movies.

Binge is compatible with numerous devices, among them Apple TVs (4th generation +), Android TV (OS 7.0 +), Chromecast, Telstra TV, and Apple and Android phones, among others.

Taking a break from Australia? Remember you can take all the TV treasures of Binge, Foxtel, et al., with you wherever you go – all you’ll need to do is download a quality VPN  to connect to your favourite services from back home.