How to watch Joshua vs Usyk: time, card and live stream details 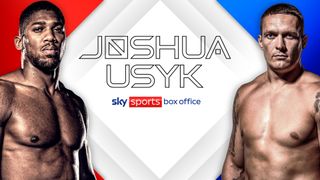 Unified heavyweight champion of the world Anthony Joshua goes toe-to-toe with the undefeated Oleksandr Usyk this weekend in a fight that’s fraught with peril for both boxers. And you’re in the right place to find out everything Joshua vs Usyk, from ring walk time, to the full card, and with details on how to watch live streams wherever you are…including absolutely FREE!

We’ve sat through plenty of low-stakes brawling in recent months, but this fight marks a welcome return to the top table. AJ (24-1) is the favourite and the man putting his belts on the line, but The Cat (18-0) – an awkward southpaw – has his own unblemished record to maintain.

Both men burst onto the scene at London 2012, Joshua winning gold in the super-heavyweight division, as Usyk triumphed in the heavyweight category.

Having dominated the cruiserweight scene over recent years, the Ukrainian is now aiming to establish himself as one of the world’s foremost heavyweights. Taking down IBF, WBA (Super), WBO and IBO champion Joshua on his own turf would be seismic.

It’s the man from Watford who holds all of the aces, not only in height and reach, but also in age and experience, but Usyk could prove a tougher customer than many of his recent opponents.

Follow our guide below to catch this unmissable fight – here’s how to watch Anthony Joshua vs Oleksandr Usyk online and get aboxing live stream, no matter where you are in the world.

Joshua vs Usyk time and date

The Joshua vs Usyk fight takes place on Saturday, September 25 at the Tottenham Hotspur Stadium in London.

The night’s undercard is set to get under way at 7pm BST local time – that’s 2pm ET / 11am PT in the US, 4am AEST on Sunday in Australia, and 6am NZST in New Zealand.

Ring walks for the main event are roughly expected to be as follows.

You can buy the Anthony Joshua vs Oleksandr Usyk fight for £24.95 via Sky Sports Box Office, if you sign up for it yourself. For bookings made over the phone, the price goes up to £29.95 after midnight on Friday.

Watch either via your Sky account, or you can watch on your computer, mobile, tablet and various TV streamers.

Sky’s coverage of the event starts at 6pm BST, with the first half-hour being shown for free via a live stream on the Sky Sports Boxing YouTube channel.

It ducks behind the paywall at 6.30pm, though Joshua and Usyk aren’t expected to make their ring walks until around 10pm

Not in the UK? You’ll need a VPN to watch this live stream – follow those instructions set out below.

As we say, DAZN has this wrapped up almost everywhere. But if you’re abroad right now and discover that your coverage is geo-blocked, then the only alternative that we know is to use a VPN to dial in to a country that is showing the fight.

The software is perfect for this as it allows you to change your IP address and appear to be in a completely different location – and all through a safe, encrypted connection. Here’s how to get started.

Use a VPN to live stream Joshua vs Usyk anywhere

ExpressVPN is the world’s top VPN
We’ve tested all of the major VPN services and we rate ExpressVPN as the absolute best. It’s compatible with loads of devices including iOS, Android, Amazon Fire Stick, PlayStation, Apple TV and such, and we found it secure, speedy and simple-to-use.

Remember, there are loads of benefits to using a VPN beyond just helping you regain access to streaming services and content from abroad. One of the biggest is security: by using encrypted tunnels, streaming VPNs give you a robust first-line of defense against cybercriminals and government snooping. This makes everyday tasks like online shopping and banking much safer, and many people choose to use one for that reason alone.

How to get a Joshua vs Usyk FREE live stream?

Yes, in a way –  but only in certain countries where a DAZN free trial is on offer.

Boxing fans in Canada are among those in luck, as while it costs 20 bucks in the Great White North for the service monthly, you can get a FREE trial of DAZN in Canada.

It’s one of the few countries – along with Germany, Austria, Switzerland, Spain, Brazil and Japan – where the service offers a trial on the house.

If that isn’t you, don’t worry, as DAZN is dirt cheap all over the world! Take Australia, for example, where it’s offered for the introductory discount price of just $2.99 a month.

Streaming service DAZN has the rights to show the Joshua vs Usyk fight all over the world, including the US, Australia, Canada and New Zealand and 160+ others (full list here).

UK and Ireland are obviously not included on the list, and nor is the Ukraine, France, Netherlands and a selection of other African and Asian states.

Australia
Undercard 4am AEDT
Joshua and Usyk ring walks 7am AEDT(approx)
Sign up for $2.99

New Zealand
Undercard 6am
Joshua and Usyk ring walks 9am (approx)
Sign up for $2.99

Not in a country that has DAZN? Residents of the country who find themselves abroad for the fight should find they can access their domestic DAZN subscription just like they would at home – wherever you are in the world, all you need is the help of a good VPN.

It’s worth noting though that if you’re looking to subscribe to DAZN for the first time you may find the service manages to effectively block certain VPNs at the point of creating an account. VPNs most notably encounter obstacles starting from scratch with DAZN Canada, though in other places like the US our general sports VPN recommendation was working fine in 2021.

Butif you’ve already got an account, a VPN should work wherever you are to help you regain access to pre-existing subscriptions.

Pronounced ‘Da Zone’, DAZN is a sports-centric streaming service that launched in 2016 and is now available in over 200 countries all around the world including the US, Canada, UK, Australia and New Zealand.

Its offering varies by region, but as an idea, it owns the rights to the Premier League, Champions League, NFL, cricket, snooker, rugby union and more in Canada – one of its original and biggest markets.

It’s also seeking to challenge the pay-per-view boxing hierarchy, and is scoring an increasing number of coups. In addition to broadcasting Joshua vs Usyk in a number of countries, it’s also got the upcoming Dillian Whyte vs Otto Wallin and Joseph Parker vs Derek Chisora fights.

The price of DAZN also varies depending on where you are in the world but is generally competitive – in newer markets like the UK, an introductory offer is still running that has it available for just £1.99 a month, while in more established markets like Canada it costs CAD$20 a month. It also offers a FREE trial in some areas.

Plus, it works with pretty much any modern device imaginable, including: iOS, Android, PS4, PS5, Xbox One X and S, Amazon Fire TV Stick, Apple TV, Chromecast, and smart TVs.

Who is Anthony Joshua?

Anthony Joshua is a two-time unified heavyweight champion and one of boxing’s biggest stars.

The 31-year-old has held the WBA, IBF, WBO, and IBO belts since December 2019, when he beat Andy Ruiz Jr. in their rematch, having lost the titles to him in June of that year.

AJ has fought professionally 25 times, winning 24 of those and losing once.

That 22 of his 24 victories (92%) came by knockout demonstrates his power, though a criticism that has plagued him throughout his career is that he’s yet to face any of the best fighters in the business.

The world has been calling for Joshua to fight Tyson Fury for several years, but each fighter has repeatedly insisted that the other has been ducking the fight.

Who is Oleksandr Usyk?

Oleksandr Usyk is the only fighter in history to unify all four cruiserweight world titles, which he vacated in 2019 in order to step up to the heavyweight division.

The 34-year-old southpaw is undefeated in his professional career, winning all 18 of his fights, 13 by knockout (72%).

He can’t compete with Joshua for sheer punching power, but that neither is that his style. Usyk is a defence-first fighter, capable of absorbing shots and out-boxing opponents in short, fast bursts.

If he can withstand the step up in weight, he could represent a very tricky opponent for Joshua.

Usyk may also cast an eye on some of the undercard action, which features a cruiserweight title showdown between Lawrence Okolie and Dilan Prasovic, both of whom are undefeated.

Londoner Okolie won the WBO belt in March, and faces a fierce battle to hold onto it.

Also on the card is former WBA (Super) and The Ring super-middleweight champion Callum Smith’s first fight at light-heavyweight, having made the switch after being defeated by Canelo last year.

Campbell Hatton, the son of the great Ricky Hatton, is also fighting at lightweight.