How to watch Salt-N-Pepa movie online: stream the biopic from anywhere today 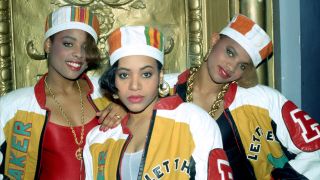 Ooh, baby, baby! The latest music legends to get the Lifetime biopic treatment are a hip-hop duo that ruled the airwaves in the 80s and 90s – read on to find out how to watch Salt-N-Pepa – no matter where in the world you find yourself.

Following on from made-for-TV movie masterpieces centring around everyone from Michael Jackson to Whitney Houston, to Aaliyah and Toni Braxton, the channel is now tackling the story of the first female rap act to achieve certified-platinum status.

With a lengthy three-hour runtime, the movie highlights the dynamic duo’s dramatic rise to fame. From teenage nursing students to international music icons in mere months off the back of recording a hit single in a New York City public bathroom, its a fascinating story that should suit the Lifetime format perfectly.

GG Townson takes on the role of Salt with Laila Odom playing Pepa, while The Next Step’s Monique Jasmine Paul is their trusty sidekick on the wheel of steel, DJ Spinderella.

With director Mario Van Peebles at the helm – the man behind such retro cinema smashes as New Jack City and Posse – we’re expecting the 90s era vibes to be very much in check.

Both Salt and Pepa are credited as producers alongside fellow female rap icon Queen Latifah, and with it being an authorised biopic, you can expect to hear all the girls era-defining party anthems like Push It, Let’s Talk About Sex and Whatta Man.

Keep reading for full details of how to watch Salt-N-Pepa online today.

How to watch Salt-N-Pepa movie online in the US

This feature-length hip-hop movie is exclusive to celebrity biopic specialists Lifetime. Traditional cable viewers in the US (and in Canada) can catch it on the channel at 8pm PT/ET on Saturday from January 23.

If that time doesn’t work for you, or you merely want to watch the show on a mobile device, it can be streamed through Lifetime’s VoD platform, though you’ll need to enter your cable login details first to get access.

If you’ve long since forgone cable for cheaper, OTT methods of entertainment, then our top two picks for services offering Lifetime that will let you stream the movie are:

Sling TV:  This budget friendly platform includes Lifetime in both its Sling Blue and Sling Orange plans ($30 per month individually or $45 for both) with a free trial available.

Fubo: Fubo is a more complete cable replacement service and good value too at $64.99 a month for 108 channels (including VH1, the Comedy Channel, CNN, and lots of sports channels). Plus, you get two simultaneous streams, and 30 hours of Cloud DVR storage. New subscribers are entitled to a 7-day free fuboTV trial, and if you cancel before the trial ends you won’t be charged a thing.

How to watch Salt-N-Pepa from outside your country

If you’re out of the US, you can still watch Salt-N-Pepa no matter where you’ve ended up.

Generally, if you’re traveling from the US, you’ll want to be able to access the same streaming service you would at home. And as HBO Max is only available within the United States, you’ll need to download a VPN to do so.

Use a VPN to watch Salt-N-Pepa online from abroad

ExpressVPN is the world’s top VPN right now
We’ve taken the time to try out all the biggest VPN providers and we found ExpressVPN to be the best of the best. It works with lots of devices and offers super fast connections across its many servers.

Throw in its robust set of security features and ExpressVPN is the best all-round VPN for streaming  – and perhaps best of all, it has a 30-day money back guarantee plus 3 months FREE when you subscribe for a year.