HyperX Armada 27 Gaming Monitor Review: The Whole Is Less Than the Sum HyperX's display debut is really a monitor arm that comes bundled with a monitor. 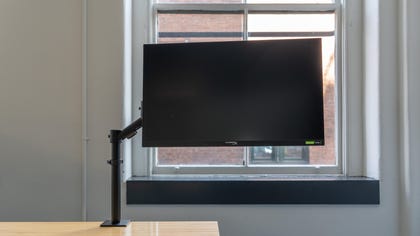 For its debut into gaming monitors, gaming accessory-maker HyperX arrives with a novelty: monitors bundled with an arm rather than a traditional stand. It’s not a new idea — some business monitors have had a similar option for ages — but it is new for gaming, and mounting monitors on arms is pretty popular with PC gamers, so on that level it makes sense.

However, unless you really like the convenience of having it all in one box and potentially a tool-free setup, the new Armada line doesn’t stand out from buying them separately. It’s a good monitor and a sturdy arm, but as a bundle it seems overpriced.

Everything is slated to ship in September. The 27-inch Armada 27 goes for $500 while the 25-inch Armada 25 will cost $450. You can buy the mounts individually as well, with the Armada Single Gaming Mount going for $110 and a second Armada Addon Gaming Mount (for dual 27-inch or quad 25-inch monitor setups) for $80. No UK or Australia-specific prices are yet available.

Monitors with similar specs to the Armada 27 — 165Hz, 2,560×1,440 pixels, 95% P3 or greater color gamut and support for bare minimum 400-nit HDR — almost all cost less than $350. And that’s with perks like USB hubs and occasionally speakers, which this one lacks. Plus, given that HyperX is famous for its gaming headsets, it’s baffling that the monitor doesn’t even have a speaker jack.

I haven’t seen a back panel so barren in a while — just a pair of HDMI 2.0 ports, a DisplayPort connection and power. And you can buy a random arm for well under $100, or under $200 for a heavier-duty one.

Despite its limitations, the monitor is quite good for what it does. Given that HyperX is owned by HP, it’s unsurprising that the monitor feels very much like a reskinned HP. That’s not a bad thing — I really do like HP’s gaming monitors, like the HP Omen 27u I tested recently. The Armada’s onscreen display, for example, gave me deja vu.

But I miss HP’s control software, and there isn’t much in the way of specific profiles targeting specific types of games, like RTS or FPS: There’s a single one-size-fits-all Gaming choice that basically changes the brightness, turns on Adaptive-Sync (which is on by default), bumps pixel response speed from Level 1 to Level 2, and expands the color gamut to the display’s maximum. In addition to those settings, it has crosshairs and MPRT (to compensate for some motion artifacts).

At its easiest (with the included monitor) setting up the arm is pretty simple. It has a clamp that can accommodate a table between 0.6 and 2 inches (15 to 50mm) thick, but it also comes with support hardware if you feel like, oh, drilling a hole in your desk instead. The two pieces — clamp and arm sections — have tool-free adjustment thanks to thumbscrews. The HyperX monitor just snaps onto the mount plate as is typical of modern displays; a non-HyperX monitor can be mounted by screwing on the bundled VESA mount.

Once mounted, the display can be raised or lowered, tilted, swiveled and rotated into portrait mode; that flexibility, plus the minimal space it requires on your desk, is one of the reasons I love monitor arms so much. HyperX’s can support up to 32-inch displays weighing under 20 pounds (9.1kg), which is pretty typical. It moves smoothly without much effort.

The Armada’s color is surprisingly good. As long as you’re not in the default Standard mode, it typically covers about 92% of the P3 gamut, hitting its 95% spec with HDR turned on. Most of the modes are close enough to 6,500K (anything within 200K is fine for all but the most color-critical work), have gamma close to 2.2 and contrast in IPS’ typical 1,000:1 ballpark. Its brightness hits the target for DisplayHDR 400, and it exhibits very good uniformity with no noticeable backlight artifacts.

The modes are a little odd, though. For instance, most consumer monitors default to the punchiest picture possible. The Armada’s Standard default is for sRGB rather than P3; if its color performance wasn’t good in P3 I could understand it, but it’s quite good. Vivid, which is usually one of the least accurate settings on monitors, is probably the best choice here, if you lower its brightness from 90 to around 70.

There are two color temperature modes as well: Warm, which is about 5,000K; and Cool, which tests out at approximately 9,000K.

I don’t recommend bumping the pixel response beyond Level 3 (of 5) unless you really, really don’t mind severe haloing, and I didn’t see much of an impact for the MPRT settings except progressively dimming the screen (common for these motion-blur reduction algorithms). The monitor seems to do well natively, so you may just not need it.

The HyperX Armada Gaming Mount is appropriately priced for its quality if you buy it standalone, but while the HyperX Armada 27 is a good gaming monitor I don’t know that it’s worth what you pay as part of the bundle. If it gets discounted to around $400-$450 then the pair together might be a much better buy — as long as competitors don’t get that much cheaper as well.

All measurements are performed using Portrait Display’s Calman Ultimate 2021 R4 software using a Calibrite ColorChecker Display Plus (formerly X-Rite i1Display Pro Plus) and a Murideo Six-G pattern generator for HDR testing where necessary, or the Client3 HDR patterns within Calman, where possible. How extensive our testing is depends on the capabilities of the monitor, the screen and backlight technology used, and the judgment of the reviewer.

On the most basic models we may stick with just brightness, contrast and color gamut, while on more capable displays we may run tests of most user-selectable modes for gaming or color-critical usage, uniformity and so on. For the color work, we may also run tests to verify how white point accuracy varies with brightness.

Color accuracy results reported in units of Delta E 2000 are based on Calman’s standard Pantone patch set, plus the grayscale and skin tone patches. White points results are based on both the actual white value plus the correlated color temperature for the entire gray scale (21 patches, 0 to 100%) rounded down to the nearest 50K as long as there are no big variations. We also use Blur Busters‘ motion tests to judge motion artifacts (such as ghosting) or refresh rate-related problems that can affect gaming.