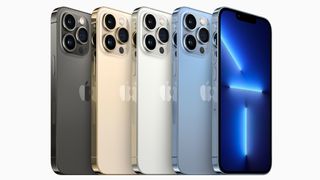 While the whole iPhone 13 range has a number of upgrades, including a speedy new A15 Bionic chipset, the Pro models see the biggest changes, with highlights including a 120Hz refresh rate for the first time on an iPhone, and up to 1TB of storage.

Below you’ll find everything you need to know about the iPhone 13 Pro and Pro Max, including their release date, price, and all their specs and features.

iPhone 13 Pro: cut to the chase

Those prices are for 128GB models, and they match what we saw last year with the iPhone 12 series, except in the UK where they’re £50 cheaper this year.

While the starting prices are the same or lower then, the price gets very high for 1TB models.

The iPhone 13 Pro and iPhone 13 Pro Max come in a choice of Graphite, Gold, Silver or a Sierra Blue shade. That last color is new, and it’s one of the boldest colors we’ve seen on a Pro iPhone.

The overall design and build is very similar to the iPhone 12 Pro and iPhone 12 Pro Max, complete with tough Ceramic Shield protection on the screen and water resistance to a depth of 6 meters. But there are a few changes, with some new stainless steel bands around the edges of the handset.

As for the screen, the iPhone 13 Pro duo comes with a new Super Retina XDR display that has a 1,200-nit peak brightness, making it up to 25% brighter outdoors, and it features a 120Hz refresh rate.

This is the first time we’ve seen a super-fast refresh rate on an iPhone. It means images will appear smoother under your finger, such as when you’re scrolling through your social media feeds or articles.

Apple’s own technology adapts the frame rate depending on what you’re looking at on your phone. This is similar to technology we’ve seen previously on the iPad series, and many Android phones already include this.

Both phones also support MagSafe, so if you have any accessories for that they’ll still work here.

That latter camera is a 77mm zoom camera capable of 3x optical zoom, 2x optical zoom out and 6x optical zoom range, with digital zoom up to 15x also available. There’s also a 12MP camera on the front.

Apple is also bringing ProRes video to the iPhone 13 Pro and Pro Max “later this year”. This video format, which is already used by many filmmakers and first arrived back in 2007, offers video shooters more efficient encoding to make editing in apps like Final Cut Pro faster and less processor-intensive.

It also lets you record 4K/30fps video in the ProRes format within the camera app, though oddly not if you opt for a 128GB model – in that case ProRes tops out at 1080p.

Beyond ProRes, there are some other new camera software features too, such as Cinematic mode, which lets you seamlessly shift the focus between subjects when shooting video, or after you’re finished shooting.

Then there’s Photographic Styles, which are adjustable filters that you can selectively apply to an image – so they’ll only affect the parts of a shot that you want them to.

And this chipset sounds very powerful indeed, with Apple promising up to 50% faster graphics performance than any other smartphone chip, plus a neural engine that can perform up to 15.8 trillion operations every second.

We don’t know the actual size of the batteries in these phones though, as Apple hasn’t said. We probably won’t find out until someone opens one up.

When it comes time to charge, you can juice up at 20W with a wired charger or 15W wirelessly, though no charger is included in the box.

What day does the iPhone 13 Pro come out?