Meta Quest Pro, or Cambria? What We Know About Meta's Next VR Headset Meta's next big VR device, expected in October, is more expensive and advanced, but it won't replace the Quest 2. 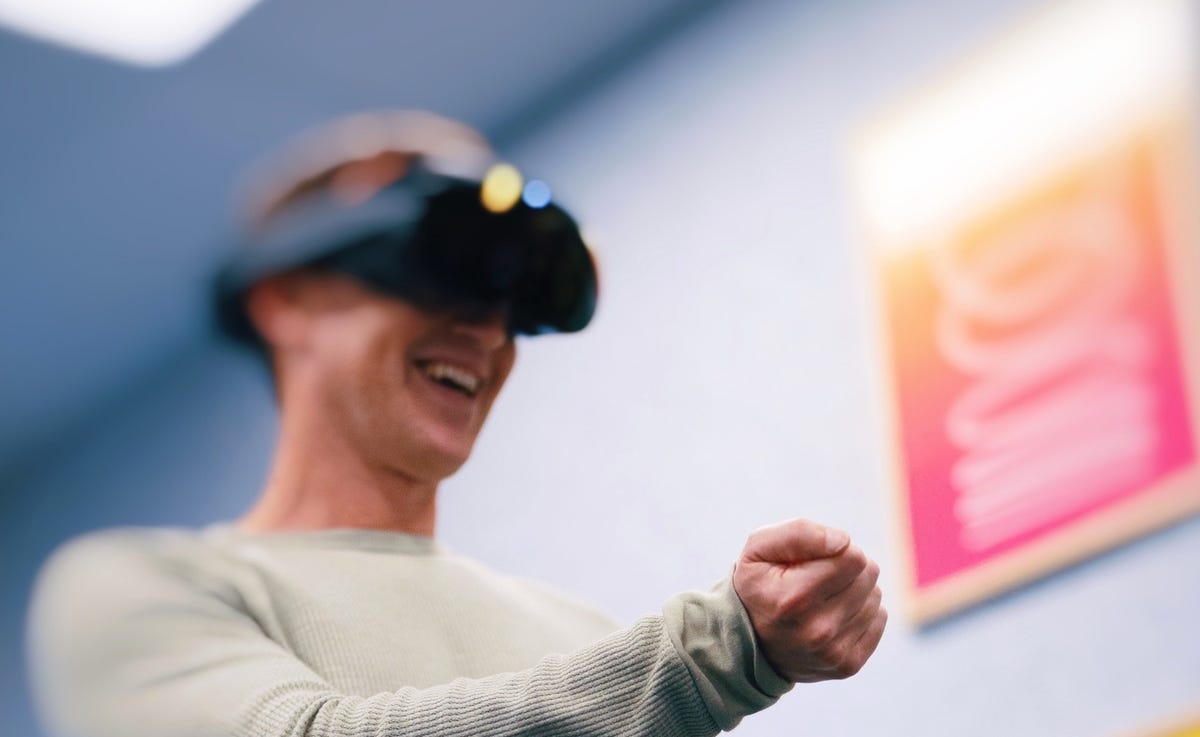 The Oculus Quest 2 (now called the Meta Quest 2) has become a surprisingly successful virtual reality headset and remains our favorite VR device despite being two years old and more expensive. But, there are more VR headsets on the horizon. Facebook’s parent company Meta is expected to release four new headsets over the next few years using Qualcomm chips, but the next on deck is coming this October, most likely during Meta’s virtual Connect conference on Oct. 11, and it’s likely to be called the Quest Pro.

Mark Zuckerberg confirmed the headset’s announcement timing during an interview on Joe Rogan’s podcast recently. And, based on convincing-looking leaks of the headset, we already know the design and packaging.

The headset, also called “Project Cambria,” was announced last year. Don’t expect it to be a true sequel to the Quest 2, though. Instead, much like what Mark Zuckerberg told CNET back in 2021, it’s likely to be a business and pro-focused headset with a significantly higher price.

Project Cambria (or the Quest Pro) looks to be a far more expensive and advanced sort of AR/VR hybrid, a bridge device that could be an amazing VR headset, but also enable mixed reality combining video from the real world with VR via improved cameras.

The Cambria will also add new sensor technology (notably, eye tracking and face tracking) that could introduce new possibilities for interacting in VR and animating your avatar. But that eye tracking brings questions about data privacy, too.

Yes, the Cambria looks to be a stand-alone device like the Quest 2. But, also like the Quest 2, expect it to optionally connect to PCs and, to some extent, phones. Early reported design mockups show a design that seems smaller than the Quest 2, but a larger battery could mean more weight. Meta has already confirmed the headset will be more compact where the lenses meet the face, using “pancake lenses” that can compress the distance needed to create convincing 3D effects.

While recent reports like those from The Information call Cambria a “laptop for your face,” suggesting more self-contained power, expect the headset to connect with computers for more powerful applications much like the Quest 2 can do right now.

Mark Zuckerberg, in a conversation with CNET last year, told me that a pro version of the Quest would focus on more sensor technology. Eye and face tracking are already known, but it’s possible that the Cambria will allow for more health and fitness tracking. Fitness has been a major focus for Meta’s VR platforms, and the company’s already acquired a subscription fitness service that measures heart rate through a paired Apple Watch. (The Oculus Move app syncs with Apple Health.) Meta is also reportedly working on its own smartwatch.

How will it mix reality?

Project Cambria’s improved external cameras will capture passthrough color video, showing it on the headset’s internal display. The Quest 2 can “see through” and show the outside world, too, but in a grainy black and white video feed. The Quest 2 overlays some VR with this feed, like room boundaries, creating a type of mixed reality. Expect the Cambria to do this far more realistically.

Mark Zuckerberg gave a brief demo of the headset’s possibilities back in May via Facebook.

I’ve already tried one example of this tech on a very high-end VR headset made by a Finnish company called Varjo. The Varjo XR-3 uses lidar and cameras to scan the real world; it then layers VR into it in a way that can look almost as convincing as the effects in AR headsets made by Microsoft and Magic Leap. I’d expect Meta’s Cambria to try for something very similar.

Meta’s aspirations for future AR glasses haven’t been realized yet, but the Cambria could end up being a toolkit for developers to make AR-type experiences that could also use hand (and eye) tracking.

How will eye tracking work?

We don’t know the specifics, but most eye tracking in VR works in a similar way: Infrared cameras measure eye movement, while some trackers also capture images of your eye. Eye tracking does a few pretty useful things: Foveated rendering can create better graphics with less processing power by only showing the highest-res details where the fovea of your eyes is looking, potentially meaning better battery life or performance in a smaller headset.

Eye tracking can also be used to create more realistic eye contact for avatars, and to combine with hand tracking and controllers to improve control accuracy. It could even mean better accessibility for people who don’t have full mobility, using only eye controls to operate the VR interface.

Meta looks to be adding face tracking cameras as well as eye tracking, which could be used to map emotions and facial expressions into avatars. But all of this tracking comes with additional privacy questions. While Meta has promised transparency and limits to how tracking data is used, Facebook’s history of user data abuse leaves a lot of concerns.

Zuckerberg promises that this headset will animate avatars more realistically, and could come along with upgraded Meta avatars. Mark Zuckerberg’s latest cartoonish avatar in Horizon Worlds became a widely mocked meme, but will eye tracking and better graphics make interactions feel better than what’s currently possible? Meta’s going to make this a big part of Cambria’s efforts, but how the next headset’s upgraded avatar controls interface with the rest of Quest 2 owners isn’t clear.

Odds are, it won’t be as much of a game console

If the Cambria headset is more than $800, there’s no way it will be as popular as the Quest 2 is now. Meta seems to be hinting that’s not the point of Cambria, which means that game developers may not be as focused on the new hardware.

Facebook has a history of funding lots of gaming and art projects on its VR platforms, but it sounds like Cambria may not be about debuting new games. Instead, Meta will likely focus on a wide range of business, training, fitness and AR-crossover apps to help build its metaverse visions. In that sense, current Quest 2 owners might already have the best VR game console for a while (until the PlayStation VR 2
arrives in 2023, at least).

The Information’s latest report on the Meta Cambria reinforces that this headset’s greatest strengths — better display resolution, eye tracking, passthrough mixed reality — will be tools to advance Meta’s vision for work and the future of VR. Look to competing high-end VR and AR products like the Vive Focus 3, HoloLens 2 and Varjo’s headsets, where professional uses are the clear goal. Meta’s had great success appealing to gamers, but it’ll have a harder time convincing workplaces to adopt its tech.

Should you buy a Quest 2 now or wait for Cambria (or a future Quest 3)?

A true successor to the Quest 2 may not happen until 2023, based on recent reports. That Quest 3 is expected to be a headset that would compete at the same price as the Quest 2, and possibly replace it, but not this year. The Cambria, however, is not expected to be that headset. If the Cambria headset is as high-priced as Meta says it is, it probably won’t even be competing with the Quest 2 for most shoppers. Instead, it may be more about pushing more advanced features (eye tracking, mixed reality, better display quality) that could eventually trickle down into more affordable products later.

Keep the concepts of “Cambria” and “Quest 3” separate in your head, and it’ll help you plan your buying decisions. The Cambria may only end up appealing to enthusiast and pro users with money to spend. I don’t expect any VR headset to be able to compete with the Quest 2’s $400 price anytime soon, except for maybe TikTok parent company ByteDance’s upcoming Pico headset.

The Quest 2 is still a fantastic headset for its price, and Meta keeps updating the software with new features regularly. Unless you’re a professional eager for a top-end headset at any price, you probably don’t need to wait for whatever the Cambria ends up becoming later this year. However, if you have a PlayStation 5, you might want to wait and see what the PlayStation VR 2 is like.