Microsoft Surface Go 3: everything we know so far 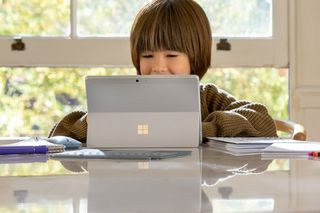 We’re anticipating an announcement for the Microsoft Surface Go 3 any day now, with rumors circulating that the successor to the Surface Go 2 and the Surface Pro 8 could be revealed during Microsoft’s September 22 event.

Perhaps the biggest rumor so far is from a forum post on Tablet PC Review, suggesting that the next-generation Surface Go could be powered by new Ryzen chips, one of which has a very low 4.8W TDP (thermal design power).

If this rumor is to be believed, the Surface Go 3 could be transitioning from the Intel processors that powered earlier models to AMD mobile chips. This could only mean good things for consumers. Not only will the device have better battery life, but it may potentially be cheaper as well, offering budget-friendly configurations of one of the best Windows tablets to economizing consumers.

However, a more recent leak suggests that the Surface Go 3 will actually come packing some Intel chips, at a range of price points.

This is all speculation at this point, but we still can’t help but be excited to see what else Microsoft has planned for its most affordable tablet. So, we thought this as good of a time as any to gather everything we know about – and everything we want from – the Microsoft Surface Go 3.

Be sure to keep this page bookmarked, as we’ll update it with any new details that reach our desks.

The original Surface Go was announced on July 10, 2018 and released on August 2 of the same year. And, its follow-up didn’t hit the streets until two years later.

If Microsoft were to do the same for the Surface Go 3, we won’t see it until 2022, sometime in the late spring or mid-summer. Still, Microsoft did release the Surface Laptop Go, packed with laptop-class hardware – though that is a bit more expensive.

However, it now looks likely that there won’t be quite so long a wait for the Surface Go 3: it’s being tipped to make an appearance on September 22, 2021.

The Surface Go line has always felt like Microsoft’s attempt at securing the budget market and giving Apple’s iPad and iPad mini a good run for their money.

It’s highly likely that the Surface Go 3 will follow suit, starting at $399/£379/AU$599, only with more powerful specs. However, if Microsoft does switch to AMD chips, which tend to be more affordable than Intel’s, this succeeding device could potentially be more affordable.

It might also work in Microsoft’s favor if it’s somehow able to bundle the device with a Type Cover or Surface Pen, though it hasn’t done that in years, so we wouldn’t put much stock in that happening.

There’s supposedly also going to be two choices of memory capacity, either 4GB or 8GB for system RAM, and storage can be a tight 64GB eMMC drive, or a 128GB SSD. The front and back cameras are also apparently unchanged from the Surface Go 2 which used 5-megapixel and 8-megapixel cameras respectively.

For things that are speculated to differ from it’s predecessor, battery life has apparently been juiced up to an improved 13 hours and the device will come with Windows 11 Home installed in S mode.

What we want to see in a Surface Go 3

The Surface Go 2 is already a pretty impressive Windows 10 tablet, rocking a premium design and decent specs for less. It’s certainly a great value for consumers who don’t want to spend close to a thousand dollars for a tablet.

However, as can be expected in cheaper devices, it also comes with its share of shortcomings. The base model is underpowered. Considering that there are quite a few Android tablets out that will give you what you need for a lot less, and you’re missing the Type Cover and Surface Pen, which you have to purchase separately, it’s not as compelling a purchase for its target audience as its rivals.

So, for the Surface Go 3 to be really worth it, Microsoft would need to make a few adjustments. Luckily, the company has a couple of years to work on necessary improvements. In the meantime, let’s talk about what we’re hoping to see in the Surface Go 3.

More power in its base model
Those hoping to only use the Surface Go 3 as a tablet, either for after-work entertainment or catch up on current events and with loved ones on social media might be satisfied with the line’s entry-level configuration. To the rest – students, for example – the base model will feel it underpowered, especially next to its cheaper Android rivals.

The higher configurations are more powerful, certainly. But, you’re then paying more, which beats the purpose of getting a cheap tablet.

If Microsoft wants to convince more budget buyers to upgrade to the next-generation Surface Go, it needs to give its base model a bit more juice.

Cheaper configurations
Something we hope might happen with Microsoft opting to use AMD chips, replacing the Intel chips in the Surface Go’s earlier models, is for the price to drop – if not for its base model, then for its higher configurations. That will make it more in line with its Android rivals in price.

Of course, the aforementioned lower-powered AMD chips might not even show up in the Surface Go 3. If it does, however, it might prove an even better value to its target audience.

Higher resolution cameras
Both generations of the Surface Go feature the same 5MP front-facing and 8MP rear cameras, but let’s face it, those resolutions are hardly enough these days. The Surface Duo has an 11MP camera while the Surface Pro X has a 10MP rear-facing one.

Type Cover and/or stylus pen included
One of the biggest gripes about the Surface Go line is that they do not come with a Type Cover or a stylus pen. For those looking to use it as a tablet, that’s certainly not a problem. And, to be fair, its biggest competitor, the iPad, doesn’t either.

Still, Microsoft is touting this as its “smallest, lightest 2-in-1 laptop” – and what is a laptop without its keyboard and trackpad. Microsoft cannot hope to continue touting the Surface Go as one without that Type Cover, especially not to students who’d rather not spend an extra $100+ for it.

Slimmer bezels
Microsoft did shrink the bezel on the Surface Go 2 so it has an even bigger display without increasing the tablet’s size. However, the Surface Pro X has proven that even slimmer bezels are possible, so it would be nice to see the Surface Go 3 to follow suit, giving its users a bigger screen area for the same device footprint.