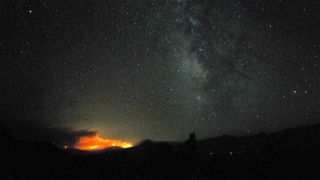 The million-plus acre Dixie Fire in California is closing in on the Allen Telescope Array, threatening the facility’s search for extraterrestrial intelligence (SETI).

The SETI Institute, which operates the Allen Telescope Array (ATA), said in a statement that the Dixie Fire now tearing across northern California is just 12 miles from the facility. Given the Dixie Fire’s northward movement, Alex Pollak, ATA’s Science and Engineering Operations Manager, said that the facility has been evacuated as a precaution and that threat mitigation efforts around the facility’s 42 antennas are underway.

“Anticipating the possibility that [the Dixie Fire] might reach the antennas, the observatory staff contacted the U.S. Forest Service’s Fire Department to prepare the site against eventual damage,” SETI’s statement says. “Two teams from the Forest Service, about a dozen people in total, removed brush from near the antennas. Trees in the area were pruned of any branches lower than ten feet above the ground.”

ATA is the only facility of its kind whose primary mission is to search for radio signals from extraterrestrial life. Since the types of microwave radio signals monitored by the ATA are not affected by the Earth’s atmosphere, its facility does not need to be located at a higher elevation such as mountaintops or mountainous plateaus like mirror-and-lens optical telescopes do.

What it does need, however, is a very radio-quiet region, typically low-population rural areas that are often surrounded by natural pasture and forests. The kind of region that makes detecting the presumably faint radio signals of an alien civilization possible are also the most susceptible to wildfires, unfortunately.

Analysis: no matter what you’re doing, climate change is going to disrupt it

Its sometimes difficult to predict how climate change is going to affect our lives because we tend to see the big picture problems like rising temperatures and sea levels, but those big, top line effects have granular, downstream consequences for just about everybody.

If someone said that climate change was going to disrupt the search for alien life, people may not make the connection that California wildfires – exacerbated by the climate crisis – would disrupt the telescope arrays we use to search among the stars.

When we talk about flooding in coastal regions, we don’t think about the disruption to industry resulting from essential supply chains being cut off by washed out roads, or the disruption to factories or commercial centers by downed powerlines, line we’re seeing in Louisiana right now.

If you think you know how climate change is going to upend your life, you don’t; not totally. And you ultimately won’t know until something happens and its too late to do anything about it, like watching your farm or property get washed away by higher than expected snow or glacier melt or burned to the ground in an uncontrollable wildfire.

A lot of climate change is already locked in, but there is still time to keep things from getting even worse. We should all probably get on that.