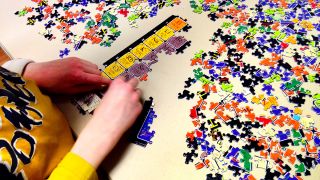 Tired of TV shows that spoon-feed you the plot? You may want to check out Jigsaw, an upcoming Netflix series that may have nothing to do with the horror franchise Saw, but has everything to do with piecing a puzzle together.

Jigsaw is a new heist show that lets you watch its episodes in any order, piecing together different fragments of the story in whatever way you want – before a finale that gives an ending point to the series.

It’s a fascinating experiment, and one that ties in with Netflix’s other attempts at pushing the boundaries of storytelling on its streaming platform.

We’ve seen a medley of interactive TV series on the platform since Black Mirror’s Bandersnatch special, which allowed viewers to make decisions at crucial (and not so crucial ) junctures in the story – everything from whether to commit murder to what kind of cereal you should eat in the morning, with countless endings to discover.

Netflix, too, has been playing around with how to order TV episodes with select series – as with Love, Death + Robots, an animated series with four possible viewing orders that were randomly allocated to different users.

But Jigsaw seems to be going a different route still, with the option to watch every episode in any order you choose – except the finale, which comes at the end to tie everything together.

While we’re yet to sample any of Jigsaw ourselves, this already throws up plenty of narrative possibilities – warming you to one character before undermining your trust, or turning a growing romance across several episodes for one viewer into an increasingly frosty relationship for another. As a heist movie, too, any twists and turns will be experienced in a vastly different order depending on what episode you choose first – offering a sense of unpredictability that can be hard to replicate in a standard three-act film.

The format is then more like Sam Barlow’s Her Story – a detective game that feeds you reels of footage to be viewed in any order you choose, allowing you to piece together your own series of events and understanding of what has transpired.

The finale episode of Jigsaw looks to wrest some of that control back from the viewer, but it’s a fascinating departure from the traditional linear programming that we’re used to seeing – and a firm acknowledgment of the way that viewing habits have changed in the streaming era.

Whereas we used to primarily watch a new episode broadcast every week – something that still happens for flagship shows like Game of Thrones of Watchmen –  it’s very normal for Netflix seasons to be dropped in their entirety at once, allowing us to gradually nibble at episodes or throw them all down your gullet in a single session.

That offers more possibilities for directors and showrunners to play with the format: if viewers have access to 10 or 20 episodes all at once, why not give them more of a hand in how they organize them?

And as the hype around interactive specials starts to wane – nothing really has matched up to the ambition of Bandersnatch in the years since – this could well be the way forward for Netflix in TV shows to come.