Nvidia DLAA is a new take on DLSS, and could be seriously cool for RTX GPUs 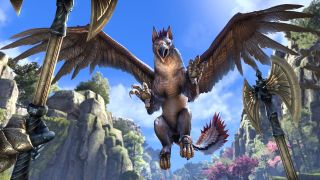 Nvidia has a fresh trick up its sleeve in the form of DLAA, which as you might guess from the acronym is a sibling tech of DLSS, and it’s being tested with the Elder Scrolls Online MMO.

DLAA stands for Deep Learning Anti-Aliasing (in the same way that DLSS means Deep Learning Super Sampling), and it employs the exact same machine learning tech to hone and provide an impressive form of anti-aliasing (smoothing over a game’s visuals).

As PC Gamer spotted, Rich Lambert, Creative Director at ZeniMax Online Studios, enthused that: “You won’t get a performance boost out of this, but what you will get is absolutely incredible anti-aliasing.”

When can you experience these (hopefully) improved visuals in Elder Scrolls Online? Well, as you may have seen, Nvidia released a new graphics driver today, and along with a whole load of extra games rocking DLSS and some important additions for titles supported by Windows 11 including Deathloop, the driver adds DLAA and it’s being enabled on the Elder Scrolls Online test server as of today.

Elder Scrolls Online testers should note that aside from the new Nvidia GPU driver, they’ll need to be running an RTX 2000 or RTX 3000 series graphics card to get DLAA. The feature debuts with Update 32 for the MMO, which also arrives today, and you’ll find the DLAA option alongside DLSS as you might expect.

Let’s take a deeper dive into exactly what DLAA actually is. As Alex Tardif, lead graphics engineer at ZeniMax Online Studios, explains in a tweet, it’s basically using Nvidia’s deep learning tech, but ditching the upscaling component. Streamlining it, if you like, and doing nothing involving upscaling the resolution, but just using AI to remove jaggies and generally get smoother edges with a game’s graphics (otherwise known as anti-aliasing).

In short, nothing happens with any resolution trickery, this just applies an effective form of anti-aliasing at the current resolution; and apparently this pure anti-aliasing option works very well.

If this proves to be as slick an implementation of anti-aliasing as promised, it really could make a big difference to how clean and realistic games look, while minimizing any performance hit.

As it’s still in testing, we should temper expectations for now – it’s obviously not clear how the results of DLAA might pan out, particularly in any initial incarnation. But this is certainly a potentially very exciting development, and hopefully something that comes to other games which already support DLSS in short order, perhaps.