Nvidia GeForce RTX 4080 – news, rumors and what we want to see 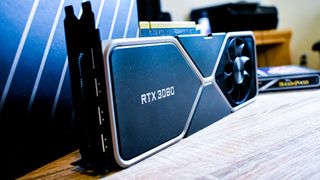 The Nvidia GeForce RTX 3080 is about a year old at this point, and even this long after it’s launch, its still incredibly hard to find. But, we’re starting to see rumors and speculation popping up about the Nvidia GeForce RTX 4080 – and we might see it appear sometime in 2022.

The next-generation graphics card will likely be based on the Nvidia Lovelace architecture, which is looking more and more like the direct follow-up to the Ampere design that the RTX 3080 is based on. But, given the increased demand and a global silicon shortage, we wouldn’t be surprised if this current generation of graphics cards lasted a bit longer – even if the rumors are pointing in a different direction.

It’s still incredibly early, though, and even the most optimistic rumors say we won’t see the next graphics cards until October 2022. Until then, we’ll just keep gathering up all the latest leaks and rumors about the next Nvidia graphics cards and break them all down right here.

We’re obviously pretty far out from an Nvidia GeForce RTX 4080 release date right now, but we’ve seen a few rumors sprouting up about when we could potentially see the graphics card. The main one is from famed Twitter leaker @kopite7kimi, who suggested that Lovelace, the architecture the RTX 4080 will likely be based on, will be launching “a little bit earlier”.

This was in reference to earlier rumors that suggested the next-generation graphics architecture would be launching at the end of 2022. Couple that with another leaker suggesting that the next graphics card will be launching in October 2022, and it’s starting to look like we may see the Nvidia GeForce RTX 4080 almost exactly two years after the launch of the RTX 3080.

This would be on-track, as most graphics cards generations last about two years. The RTX 2080, for instance, launched September 2018, a little over two years after the May 2016 launch of the GTX 1080. And, of course the RTX 3080 launched in September 2020, which was almost two years on the dot. So, if Nvidia is going to keep up its regular cadence with its next GPUs, it will probably be September or October of next year.

It almost feels silly at this point, but when we reviewed the Nvidia GeForce RTX 3080, we praised it for bringing such a huge improvement in performance at a lower price point than the RTX 2080 Super. Now, a year later, you can see how that turned out.

While a lot of the price increases you see right now aren’t Nvidia’s fault, per se, we doubt Nvidia won’t take advantage of the higher prices people are apparently willing to pay for upcoming graphics cards. It’s still way too early to know how expensive Nvidia’s next graphics cards will be, but we would be surprised if Nvidia didn’t raise the price.

Nvidia GeForce RTX 4080: what we want to see

Given that right now we don’t have any hard details on what Nvidia Lovelace will be capable of, beyond that it will likely be based on a 5nm manufacturing process and have ray tracing, we thought it’d be best to think back on Ampere and come up with a wishlist of sorts about what we’d like to see in the next generation of graphics cards.

An actual 8K graphics card
While the Nvidia GeForce RTX 3090 was billed as the first 8K graphics card when it launched in September 2020, it still struggled quite a bit at that resolution, especially when you started turning up quality settings. Instead, to really get the full potential at 8K, you basically had to rely on DLSS which, to be fair, is better than it’s ever been.

More VRAM
The Nvidia GeForce RTX 3080 has just 10GB of VRAM, and any GPU that’s coming out in 2022 that’s supposed to lead the pack simply needs to have more than this.

And for the most part, it seems like Nvidia has figured this out halfway through this current generation, strapping 12GB on the RTX 3060 – which means its entry-level graphics card has more VRAM than its flagship. With the Nvidia GeForce RTX 4080, we’d love to see at least 16GB of VRAM.

More DLSS titles
Now that AMD has released its FidelityFX Super Resolution tech, we’re starting to see a ton of games adopting it, thanks to its open nature. But, DLSS still looks way better for those who are running Nvidia graphics cards. We’d love it if Nvidia was ready for the RTX 4080 launch with a whole suite of brand new AAA PC games that use the tech to really sell prospective users on the card.

Better ray tracing performance
This one is basically a given, but enabling ray tracing on any graphics card right now is a huge impact to performance. It’s unrealistic to expect Nvidia to be able to release a GPU that can just handle RT effects like they’re nothing – at least for now – but we’d love to see enough of an improvement that we don’t have to pick between framerate or pretty graphics.