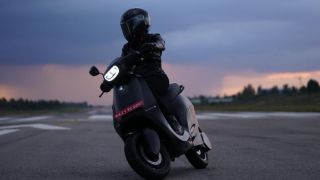 Homegrown electric vehicle startup Ola Electric has got a tremendous response for its maiden electric scooter. The company has stated that it has been able to sell over 86,000 scooters within 12 hours of the first sale day. This response is similar to what the company experienced when it opened the scooter for pre-booking for just Rs. 500, a couple of months back.

To recall, the company had announced a couple of battery-powered scooters on August 15 in India. The Ola S1 and S1 Pro were expected to start retailing online starting September 8, however, owing to technical difficulties the sale was postponed.

Ola is currently letting the users who have pre-booked the scooter make the down payment and confirm their purchase. These customers are required to pay an amount of Rs. 20,000 upfront and can choose to pay the rest in EMIs or cash before the scooter is dispatched.

The fact that Ola has been able to sell 4 scooters per second on day one shows that the Indian market needed a mass player that can offer a no-compromise electric two-wheeler at a competitive price. After all, ever-increasing petrol prices haven’t been helping at all – however, the limited availability of branded products like Bajaj Chetak and Ather has been stifling the growth of zero-emission scooters in the country.

Numbers do tell you the story

Mind you Honda Activa has been the most selling ICE two-wheeler by a fair margin in India for a considerably long period. A new entrant outdoing the number in less than a day shows that the country is now ready to switch to a clean energy vehicle and had just been waiting for viable options.

What is more surprising is that Ola doesn’t have any offline channel partners as of now which means that users cannot walk into a retail store as per their choice to check out the scooter and hop on for a trial run. The scooters have been unveiled online and need to be purchased online as well. Even the deliveries will happen directly from the company’s factory to the users’ doorstep.

Traditionally a 2-wheeler has been a part core of Indian middle-class households and with lots of emotions attached to it – it is often treated as a family member. This underlines Indian consumers’ willingness to adapt and change with time. Else who would’ve thought that people will be happy to buy such an important part of their life cycle online without even checking it once?

Though it’s just day one of the sales and these could be early adopters who are willing to jump the gun, sustaining sales numbers will be a key for Ola. That said, buyers in the country had been hearing a lot about electric vehicles for the last couple of years – thanks to the central and state government’s policies, major brands looking to enter India, and the increasing fuel price that has inflated the household budget to multifold.

Now that Ola has nailed the “customer expectations” and looking to go all out thanks to the massive factory it has built-in record time, it is about time for the traditional operators that have a capacity, market, and expertise, especially Bajaj and Honda 2 Wheelers, to re-think their priorities and re-align them as quickly as possible with the customer requirements.