Patriots vs Jets live stream: how to watch NFL online from anywhere 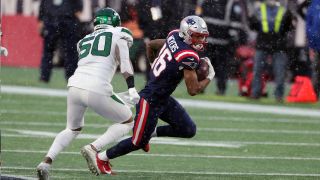 Two of the league’s most exciting rookie QBs face off in an AFC East clash that already feels huge, despite the season’s infancy. The bad news for Zach Wilson and the Jets is, promising or not, Bill Belichick eats rookie QBs for breakfast, and after losing to the Dolphins last weekend, The Hoodie’s hungry! Read on as we explain how to get a Patriots vs Jets live stream and watch the NFL online from anywhere.

If Robert Saleh didn’t already have a job on his hands, he certainly does now, with Mekhi Becton’s knee injury looking set to further weaken an already flimsy O-line. Wilson got precious little help from his unit and took far too much heat in the Jets’ 19-14 defeat by the Panthers, and you fear for him today.

On the other side, Mac Jones will be licking his lips at the prospect of facing a D that gave up 390 total yards to middling opposition last week. Despite giving up eight penalties and a couple of fumbles, the Pats were in it right to the last against the Dolphins.

Tighten up those errors and they’ll get their first W on the board. Follow our guide for how to watch the Patriots vs Jets online and get an NFL live stream wherever you are in the world right now.

How to watch Patriots vs Jets from outside your country

Use a VPN to live stream Patriots vs Jets from anywhere

Patriots vs Jets live stream: how to watch NFL in the US

Today’s Patriots vs Jets game is being shown on CBS, with kick-off scheduled for 1pm ET / 10am PT.

How to watch Patriots vs Jets without cable

How to watch Patriots vs Jets: live stream NFL FREE in Canada

Today’s Patriots vs Jets game kicks off at 1pm ET / 10am PT. Canadian NFL fans are some of the the luckiest in the world, as streaming service DAZN is showing it along with every single game of the 2021/22 season, right the way through to the Super Bowl.

Plus, the FREE 30-day DAZN trial lets you try before you buy – essentially mean you can live stream Patriots vs Jets free of charge.

Patriots vs Jets live stream: how to watch NFL online in the UK

The Patriots vs Jets game kicks off at 6pm BST on Sunday evening, and you can tune in via the NFL Game Pass, which is showing every game of the season live.

Sky Sports shows at least five NFL games a week but the Patriots vs Jets game isn’t one of this week’s featured matchups.

How to watch Patriots vs Jets FREE: live stream NFL in Australia

The Patriots vs Jets game kicks off at 3am AEST on Sunday night/Monday morning.

At the time of writing the channel hasn’t confirmed which games are getting that free treatment this weekend, but we’ve no doubt its listings will be updated closer to kick-off time.