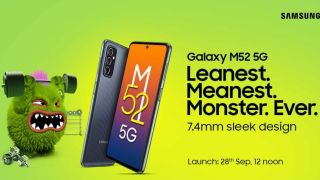 Update (September 19): Amazon has updated the listing on the site and now, Samsung Galaxy M52 5G will be launched in India on September 28.

The Samsung Galaxy M52 5G will be launched in India on September 19. The teaser on Amazon has confirmed the launch date. The phone’s microsite is also now live and it does confirm a few specifications of the upcoming device.

The Amazon page has “Monster is back” text written on the back 一 the word “Monster” was used last year during the launch of the Galaxy M51 as well. While the page on Amazon doesn’t explicitly put out the phone’s name, the source code of the page revealed it will indeed be the Samsung Galaxy M52 5G.

Firstly, the Samsung Galaxy M52 will be a 5G device and will come with support for 11 5G bands in India. While the company did not reveal the actual processor, the device is expected to come with Snapdragon 778G paired with up to 8GB of RAM and 128GB of internal storage.

Further, the next improvement is said to come in the visual department. The device will come with “2x smooth display” as per the teaser which means it will pack in a 120Hz refresh rate. The phone is said to come with a 6.7-inch Full HD+ Super AMOLED display.

In terms of other specs, the Galaxy M52 5G is expected to come with a triple camera setup led by a 64MP main camera (ISOCELL GW3), a 12MP ultra-wide lens, and a 5MP macro shooter. There should be a 32MP selfie snapper too.

With almost all the specs in place, the only last missing piece of the puzzle is the battery size and charging speed. The Galaxy M51 was a battery champion phone with its mammoth 7,000mAh battery. It’d be interesting to see how the company plays its card here.