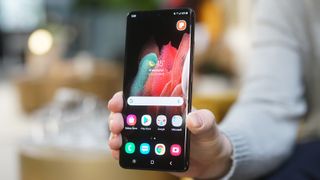 While the Samsung Galaxy S22 series is still likely a long way out, with a January 2022 launch date highly likely, the leaks and rumors have been coming in thick and fast for all three devices in the line.

These are to be the successors to 2021’s Samsung Galaxy S21, Galaxy S21 Plus and Galaxy S21 Ultra, but have also got the big boots of the Samsung Galaxy Note 21 to fill, with 2021’s late-year flagship actually canceled, much to the chagrin of Samsung fans.

Little is offically known about what Samsung will be concocting for its next flagship S-range smartphone, despite the quantity of unofficial leaks, and we’re almost certain to hear of the Galaxy Z Fold 3, Galaxy S21 FE and Galaxy Z Flip 3 before we hear about the S22.

Below is where we’ll be collating all the leaks, rumors and news we hear about the Samsung Galaxy S22 until its launch, likely in early 2022. We’ll be keeping track of details of the Galaxy S22 release date, price, features and much more.

Then below that you’ll find our ultimate wish list of what we want to see Samsung improve for its next Galaxy S flagship range.

The only real Samsung Galaxy S22 release date rumor so far points to January 2022, but doesn’t say exactly when in January.

That makes sense though, as we’d expect Samsung to follow a similar schedule to its 2021 plans where the company pulled forward its launch compared to previous years and revealed the phone in mid-January. We’ve also heard that the phone could enter mass production in November, which would likely work for a January launch.

Does that mean we’ll see the Samsung Galaxy S22 series in January 2022? There’s no guarantee, and Samsung may decide to default back to its usual spot of releasing in February or March. That said, the company may even bring the launch forward and announce the handsets even earlier.

An earlier launch is especially possible since it looks like there probably won’t be a Samsung Galaxy Note 21, meaning there will have been a big gap between mainstream (read: non-foldable) Samsung flagships.

But we doubt Samsung would launch two S numbers in one year, and a leak suggests that the Samsung Galaxy S21 FE will instead take the Note’s place.

So while no-one knows yet what to expect from Samsung, our best guess for now is a January launch again, but we’ll be sure to provide more details when leaks start giving us a clearer expectation of the release date.

Below you can see a variety of top deals that are currently available on Samsung’s 2021 flagship series.

The overall design though might be very similar to the current range, according to one leak, so don’t expect big visual changes.

This 50MP camera could get unveiled in September, as a leaker thinks Samsung will show off its new ISOCELL snappers then, including the 50MP one as well as a brand-new 200MP sensor.

It also sounds very much like the Galaxy S22 won’t have a 3D time-of-flight (ToF) sensor on its rear camera setup. That’s no real surprise – it wasn’t on the Galaxy S21 either – but it might disappoint those who wanted it to make a return.

As for the Samsung Galaxy S22 Ultra, one report originally suggested it could have a 200MP main camera and an under-display selfie camera. Further reports since then have suggested that Samsung won’t be including a 200MP sensor, and instead it will go for a 108MP sensor with a “polish” that we haven’t seen on previous versions.

Their zoom potential might be the same as the S21 range as well, with the S22 and S22 Plus said to offer 3x optical zoom, and the S22 Ultra both 3x and 10x. That’s a claim we’ve now heard multiple times, though one source points to the zoom snappers being 10MP rather than 12MP.

That said, we’ve also now heard the 200MP claim again, along with a claim that the Samsung Galaxy S22 Ultra will have a penta-lens camera with Olympus tech. That Olympus partnership is also something we’ve heard more than once.

The rumored under-display selfie camera is looking a lot less certain though, as a source has since said that the Galaxy S22 won’t have this, because the quality apparently isn’t high enough, the camera itself is still supposedly slightly visible under the screen, and Samsung simply can’t build enough of them right now.

One source also says to expect continuous optical zoom, meaning that all of the zoom levels up to its maximum optical (likely 10x) would be optical, where most phones have to fall back on digital or hybrid zoom for the middle zoom ranges.

However, given that multiple sources point to the S22 Ultra having two zoom cameras, we’re not convinced it would also sport continuous optical zoom, as having two shouldn’t be so necessary if it did.

Beyond that, Samsung itself has confirmed that it won’t be including chargers in the box with future smartphones, so you should expect to buy a separate charger alongside your Samsung flagship if you’re not already equipped with one.

And one piece of information has also emerged about the charging speed, as apparently, Samsung is testing 45W or 65W powering. Either would be a big improvement on the 25W of the S21 series, though the S20 Ultra had 45W.

In particular, 45W powering has been rumored, but apparently only on the S22 Ultra. That figure is quite a bit below the competition, with other mid-range and premium Android handsets ranging from 65W to 120W.

One source says to expect an Exynos 2200 chipset that would be paired with an AMD GPU. This is something we’ve heard before, as one much older leak suggested Samsung was working on a new chipset in collaboration with AMD.

This AMD partnership has since been confirmed, and we now know that it will bring ray tracing and variable rate shading capabilities to the chipset, and therefore presumably to the Samsung Galaxy S22.

That said, a leaker claims that Samsung has struggled with producing this chipset, which might mean most places get a Snapdragon one instead (likely the rumored Snapdragon 898). We’ve now heard again that most regions will get the Snapdragon version.

Other spec leaks include claims that the RAM and storage amounts won’t change from the Galaxy S21 range.

Indeed, a benchmark for the Samsung Galaxy S22 Plus lists 8GB of RAM, like its predecessor. This is for the Exynos 2200 model, and the scores achieved are worryingly low – but it seems the phone might have been in a power-saving mode for some reason, which would explain it.

We’ve also heard that the Samsung Galaxy S22 range might have vapor chambers to keep them cool. This is a feature that Samsung has used before but not in every recent flagship. However, the company is reportedly considering bringing them back for its 2022 flagships, likely including the Galaxy S22 range.

While keeping the internals of phones cool is vital to maintaining optimal performance though, vapor chambers aren’t the only way to achieve this, so it’s not necessarily a loss if the Galaxy S22 doesn’t end up with one.

Finally, it’s also rumored that the Galaxy S22 Ultra will support Samsung’s S Pen stylus, which is likely given that the S21 Ultra does.

While we wait to hear more about the Samsung Galaxy S22, we’ve put our heads together to think of some improvements we’d like to see the company make in its next flagship series.

This is a simple one, and it’s a clear step down from Samsung, as the company has almost always offered microSD support in its smartphones. For those unclear on the situation, the Samsung Galaxy S21 range doesn’t feature a microSD card slot, meaning you won’t be able to expand the storage.

Bought the 128GB Samsung Galaxy S21 Ultra? You’re stuck with that amount of storage no matter how long you use the phone. This is the case from other brands such as Apple, but we preferred it when Samsung offered the option to expand your storage.

On the topic of storage, the Galaxy S22 range should offer further storage options for people to choose from. That’s especially true if the company does decide it doesn’t want to offer microSD card support again.

The Galaxy S21, for example, is just available in 128GB and 256GB storage sizes. If you want more space, you’ve got to opt for the larger Galaxy S21 Ultra.

The Samsung Galaxy S21 range dropped in price compared to 2020’s smartphones, and that’s an admirable feat from the company, but we’d like to see the prices drop even further in 2022.

Of course, this is a big ask. The Galaxy S21 Ultra is full of top-end tech, and it’s unlikely the company will be able to drop the price down any further than it did with 2021’s phone.

That said, there were a lot of spec drops when comparing the Galaxy S21 to the Galaxy S20. If the company continues to offer slightly lower specs than we’re used to, we’d like to see the price drop down further to reflect that.

The Samsung Galaxy S21 and Galaxy S21 Plus may not be the most exciting smartphones, but they’re still a great choice. We gave each of them four stars on TechRadar, and we went up to four and a half stars for the slightly more innovative Galaxy S21 Ultra.

We don’t know how, but we’d like to see some more features trickle down to those two cheaper handsets that are almost certain to launch in 2022. We’d like to see the company bring top-end features like S Pen stylus support or the 100x digital zoom telephoto camera.

The Galaxy S21 and Galaxy S21 Plus were a bit of a downgrade on their predecessors, so we’d like to see Samsung make the next models a touch more exciting when they arrive in 2022.

This isn’t something that everyone cares about, but the Galaxy S21 moved away from a glass rear and switched to a Glasstic back. That’s Samsung’s own name for a plastic and glass hybrid, and it doesn’t feel as premium.

Both the Galaxy S21 Plus and Galaxy S21 Ultra stuck with glass, and we’d like to see the company opt for that material on every Samsung Galaxy S22 model considering the price of these smartphones.

6. Increased stylus support on the Ultra

You no longer have to buy a Galaxy Note smartphone to experience the benefits of a Samsung stylus; you can now opt for the Galaxy S21 Ultra. We found the stylus experience to be helpful, and for those who want to have the accessory it’s a great option.

That said, the S Pen support isn’t as extensive as it is on the Galaxy Note range. You have to opt for the S Pen Pro, for example, to be able to get some features, but that isn’t yet available. We’re hoping in 2022 that Samsung’s S Pen functionality for its S series will be more fully formed.