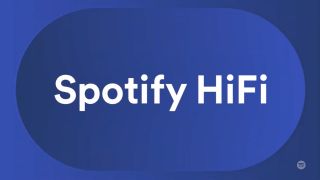 For fans of high-fidelity audio, Spotify HiFi could be the Holy Grail. The service, unveiled earlier this year, will deliver some of your favorite songs in lossless, CD-quality audio to close the gap to services like Tidal.

According to Spotify, high-quality music streaming is consistently one of the most requested new features by its users who, previously, have been limited to 320kbps.

Higher-resolution audio is something Apple and Amazon have also addressed recently when the companies made Apple Lossless Audio and Amazon Music HD available to Apple Music and Amazon Music Unlimited subscribers at no extra cost – which could be a sign that they’re preparing for the launch of Spotify HiFi.

They might be onto something. Recently, we’ve seen several signs that Spotify HiFi is close to launch. We’ve seen screenshots of the Spotify HiFi logo in the app as well as a Spotify HiFi onboarding video leaked by a Redditor.

Unfortunately, Spotify HiFi will only be available in “select markets” to start, and while Spotify hasn’t said exactly how much the service will cost just yet, it sounds like it’s going to be more than the basic Spotify Premium price of $9.99 / £9.99 / AU$11.99 per month and there’s no guarantee that every song in the entire Spotify catalog will have a HiFi version available.

The silver lining? We have good reason to believe that Spotify HiFi songs will be available to save and download to your devices for offline listening, which means you should be able to take your new lossless music library with you anywhere.

Ready to make the leap to lossless? Here’s everything we know about Spotify HiFi.

Recently, TechRadar had a reader email us photos of Spotify HiFi in use. While we’ve not been able to validate the images ourselves, the quality, font, variety and content suggests strongly that these are genuine.

The shared images show the HiFi icon in the lower right corner of the app and includes text about music playing at 16-bit/44.1kHz quality – though the reader says music wasn’t playing in lossless quality.

More recently, a video that seems to show a welcome tour of the new streaming tier has been leaked online. It was posted by Reddit user Nickx000x (via What Hi-Fi?) with the caption ‘Here’s a sneak peek at the upcoming HiFi onboarding process from modifying the app’, and appears to give prospective HiFi users a backstage tour of the service:

While the video hasn’t been verified as legitimate by Spotify, the fact it’s leaked at all suggests that the new HiFi tier will be launching very soon. In any case, Spotify said that the service would be available “later in 2021” when it was first announced, so an imminent release date certainly isn’t out of the question.

“Beginning later this year, Premium subscribers in select markets will be able to upgrade their sound quality to Spotify HiFi and listen to their favorite songs the way artists intended.”

That select markets bit is worth focusing on as it means we won’t see Spotify HiFi going live in every territory at the same time. Previously, when Spotify has rolled out new features it usually starts with the US and Europe, but now that the service is available in 80 new countries it’s hard to say which will be among the first to get the new service.

The other issue you’ll run into for Spotify HiFi’s release date is that it’s unlikely that every Spotify Connect device will get the upgrade at the same time – which means some speakers like, say, the Sonos One and PS5 might get it long before your slightly older AV receiver.

The short answer is that the service will, in some capacity be available later this year, but which devices will be available at launch will remain a heated topic of conversation.

As of right now, there’s no set price for Spotify HiFi. The company says that it will unveil more exact details later this year so, for now, all we can do is speculate.

What’s also influencing that guess is the competition: a Tidal HiFi subscription will run you $19.99 per month, while Hi-Res Audio streaming services like Qobuz and Deezer HiFi cost $14.99 per month. Amazon Music Unlimited and Apple Music are a bit cheaper and now include lossless streaming options, and it’s possible Spotify HiFi could be around the same price when it launches later this year.

So just how good will Spotify HiFi sound? It will supposedly sound, at the very least, as good as a CD does – and maybe a bit better.

According to Spotify, Spotify HiFi will stream in CD-quality lossless audio to your devices. Ideally, those devices will be connected to a network and capable of using Spotify Connect, otherwise you’ll have to pipe it over Bluetooth which will likely diminish the quality.

That’s a heck of a lot better than Spotify’s current offering of 320kbps, and will likely bring the service’s potential audio quality up to par with Tidal, Deezer and maybe even Apple’s Digital Masters.

Speaking of Apple Digital Masters, there’s always a chance that Spotify might also go above and beyond hi-fi with 96kHz / 24-bit audio, but we’re not holding our breath.

So what does that all mean? In a very practical sense, lossless audio formats have more details and data than their lossy counterparts. That means hearing new details in songs you’ve never heard before that otherwise might’ve been cut out when the data was compressed. It should also sound a bit wider and more immersive, though, a lot of it will depend on which headphones or speakers you use, too.

The murkiest detail of all for Spotify HiFi is how many – and which – songs from Spotify’s more than 30 million-song catalog will be included.

The safest assumption we can make is that it won’t support every song in Spotify’s vast catalogue, but millions of them should be.

Among those will likely be top hits from major record labels which already distribute the files to other services, while some music from smaller labels and older legacy titles likely won’t make the cut. We’ll keep our ears to the ground for more details on which songs will make the cut, but for now it’s probably best to keep your CD collection right where it is until new details emerge.

That said, however, what we can say for sure is that Spotify HiFi will allow you to take your songs with you wherever you go – some recent screenshots of Spotify HiFi explain that the feature will still work with HiFi music and Spotify encourages you to download them if you’re headed somewhere without good reception.