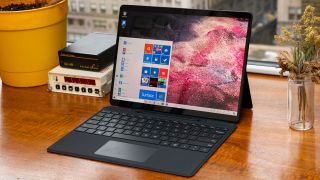 Microsoft is holding a Surface event on September 22, at which we believe it will show off the upcoming Surface Duo 2, but the latest leak suggests we may also see the next instalment in the Pro lineup, with some tasty new specs.

Twitter user @Shadow_Leak shared an image that looks like a retail listing of the Microsoft Surface Pro 8, showing off a number of previously unreleased specifications which could appear in the next generation of high-end Surface models.

Key among the features rumored in this leak is the 13-inch display’s 120Hz refresh rate – a spec we’re yet to see on any Surface device. It also looks to be adopting the ‘narrow border’ screen of the Pro X.

If the leak is to be believed, the Pro 8 will also boast swappable SSD storage, dual Thunderbolt ports, and run Intel’s 11th-gen processors and Windows 11.

It’s possible that the image is doctored, with one Twitter user claiming that the actual device seen in the leaked listing is 2019’s Surface Pro X. It’s difficult to verify this without knowing just how similar the Surface Pro 8 will look, especially if it’s seen a redesign to feature the same narrow-bezel chassis.

Regardless, as with any leak or rumor, the truth of it needs to be taken with a grain of salt. We’ll hopefully learn more about Microsoft’s next range of flagship devices at its event on September 22 at 11am ET (4pm BST, and 1am AEST on Sep 23).

If this leak proves accurate, Microsoft looks to be addressing some of the main drawbacks we found in the Surface Pro 7.

While the Pro 7 finally offered USB-C connectivity, it didn’t boast Thunderbolt 3 and so didn’t offer the same capabilities with data transfer and external monitor support.

The new narrow borders (as seen on the Pro X) also make for a much-needed modern refresh of the Surface design, bringing it in line with much of the competition and their diminishing bezels and thinner profiles.

With that said, the Surface Pro 7 was also let down by a reduction in battery life over its predecessor, and we’re more than a little concerned that the 120Hz displays and new Intel chipsets will take their toll on the Pro 8’s battery performance.

Hopefully Microsoft can cram in a bigger capacity battery and (more critically) work some magic with optimization in Windows 11 that helps eke out extra mileage, otherwise we may be looking at a significantly more homebound Surface product.