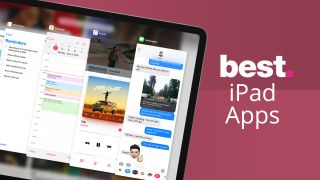 While the iPad is undoubtedly the all-conquering best tablet range right now, without the best iPad apps it’s basically just a souped-up Chromebook.

Nobody wants that – so we’re here to help you, whether you want the best iPad Pro apps to make use of the Apple Pencil, the best iPad mini apps to work on a smaller screen or just something to reinvigorate your time with a tablet.

We’ve spent hundreds of hours testing the best free and paid-for iPad apps, and have helpfully split them into multiple categories on the following pages to let you browse for what you actually need.

Of course, if you need a better iPad, our list of the best iPads around is there for you too – but if you’ve just been given a new tablet, then these are the titles that you need to be checking out – starting with our favorite new app this month.

Oh, and if you’re looking for something fun, then we’ve also rounded up the best iPad games you can download right now.

Pok Pok Playroom is a set of handcrafted toys aimed at young children between the ages of two and six. Echoing real-world play, each of the app’s individual playrooms is designed to foster experimentation and exploration. This is an app about discovery, not stress – there are no timers, and all play is open-ended.

From a visual standpoint, Pok Pok Playroom is a joy, with colorful shapes reminiscent of sleek cut-outs. The interface is suitable for youngsters, whether they’re painting a picture, playing with musical shapes and objects, or exploring rooms in a doll house or a virtual town that features rivers, emergency vehicles and little ducks you can drag about.

The subscription might grate, but the production’s wholesome nature makes it worth checking out with your children – at least for a month or two.