The best student laptops of CES 2021 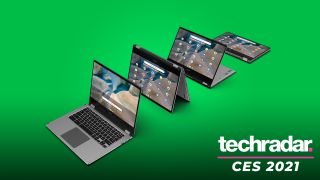 The last year has been an especially trying one for students around the world. While technology has played an increasingly larger and larger role in student experiences in the past few years, the novel coronavirus pandemic has taken these existing trends and supercharged them.

The transition to online learning is not going to be permanent for the vast majority of students, but many of the features of our current situation are likely to persist long after everyone is vaccinated and schools reopen. Students’ reliance on computers for learning, already a major trend, are now taken for granted in the era of learning from home.

Thanks to the continued proliferation of 2-in-1 hybrid laptops and the introduction of faster, more efficient processors, even more cost-conscious Chromebooks are powerful enough to become a student’s all-in-one educational platform.

So which laptops do we expect to make a splash in 2021? With CES 2021 winding down, we’ve gotten a good sense of what laptops this year will be especially valuable for students during the remainder of the pandemic and beyond.

The most promising laptops for students at CES 2021

With the introduction of new 11th-generation Intel processors, 5G connectivity, and thinner, more portable form factors, the best student laptops this year are going to have a lot going for them.

While students are mostly stuck at home for the time being thanks to the pandemic, that won’t be the case for long and a laptop is often a major investment for a family, so they’ll want to have some future proofing built in. Fortunately, a lot of the laptops we saw this year are hardly one-term ponies.

We were really impressed with what we saw from the Acer Chromebook Spin 514. In the early days, Chromebooks were pretty niche devices, but they’ve matured quite a bit since then and they’ve become much more robust.

In the case of the Chromebook Spin 514, that means a new AMD Ryzen 3000 C-series mobile processor with integrated Radeon graphics and 16GB RAM – specs that honestly make it almost too powerful for a Chromebook.

Chrome OS is fairly light on system overhead, so this is easily one of the more powerful Chromebooks out there. With its affordable price point of $479 / £499 (about AU$675), it’s definitely the kind of investment that will pay some serious, long-term dividends and will be more than capable of handling the evolution of Chrome OS for year to come.

What’s more, as a 2-in-1 laptop, the Chromebook Spin is also great for students who want to take notes directly into note taking apps which, thanks to the integrated Android app marketplace, are plentiful.

The original Samsung Galaxy Chromebook we saw at last year’s CES impressed us with its specs and beautiful design. We were far less impressed by its $999 price tag, which seemed almost obscene for a Chromebook.

Fortunately, the new Samsung Galaxy Chromebook 2 scaled back a bit on the specs while cutting a huge chunk off the price, making it a more more attractive option for students. When we got to try it out for ourselves, we immediately noticed how incredible it was to type on, which is perfect for papers and assignments, and being a 2-in-1 it’s great for taking notes.

The Intel Core i3 CPU isn’t as powerful as its predecessor’s and goes with a QLED display over an AMOLED, but this translates into a much more affordable machine with a $549 price tag. While this is still on the higher end for a Chromebook, it’s far more reasonable given its specs and the fact that it is a Chromebook, after all.

As far as Windows 10 laptops go, the HP Elite Dragonfly G2 is aimed more at the professional work-from-home crowd, but for university students, this is an excellent transitional laptop that can carry a student through internships and even entry-level positions post-graduation. That said, this is not the cheapest laptop out there by any means, so this is really the kind of laptop reserved for the final year or two of college.

Still, with its light weight and thin form factor, the Elite Dragonfly G2 is highly portable and the 11th-generation Intel processor makes it powerful enough to be functional for years to come.

The additional 4GLTE or 5G connectivity also mean you can get internet connectivity wherever you are, which – hopefully – will be even more useful after we see the more thorough 5G rollout that was expected last year but which got derailed by the pandemic.

Similarly, the Lenovo X1 Yoga is a great choice for students making the transition to the workforce. Unlike the Elite Dragonfly G2, however, the X1 Yoga is a slightly more affordable option.

Also loaded with an 11th-generation Intel Core processor, the X1 Yoga is powerful enough to see university students through the transition from the classroom to the workplace. It also comes with a 4GLTE/5G-enabled model that can keep students connected wherever they are as well as Wi-Fi 6 connectivity.

Moreover, the X1 Yoga features Dolby Voice technology for enhanced video conferencing, which will serve students well while doing remote learning, and the 16:10 ratio display makes it excellent for notetaking.

What we expect to see in 2021 from student laptops

After seeing what manufacturers showed off during CES 2021, there are definitely a couple of trends that we saw that point to what we should expect in 2021 as far as student oriented laptops are concerned.

Chromebooks will continue to grow in popularity

Chromebooks, with their low cost and relatively high functionality, have been a classroom mainstay for years now and their importance to students during the pandemic cannot be overstated.

Now, with more powerful Chromebooks coming out this year, including the Samsung Galaxy Chromebook 2 and the Acer Chromebook Spin 514 – the first Acer Chromebook to feature the new AMD Ryzen 3000C processors – students, families, and school districts won’t have to sacrifice performance to accommodate a tighter budget.

With the maturity of Chrome OS as well, including the integration of the Android app marketplace and the introduction of a working Linux kernel built in to the OS, the versatility of a Chromebook is perfect for student use while remaining lightweight in terms of system overhead.

One of the biggest draws of a 2-in-1 hybrid laptop is its ability to take “hand-written” notes or sketch drawings directly into an app, but a lot of 2-in-1 laptops still stick with the standard 16:9 screen resolution we’ve become accustomed to with a standard laptop.

Anyone who’s tried taking notes or sketching on a 16:9 screen will tell you it’s not ideal, so 2-in-1s like the Acer Spin 5 and the Dell XPS 13 2-in-1 have adopted a 16:10 screen ratio which might not sound like a dramatic change, but it makes a world of difference.

As more and more students adopt 2-in-1s for note-taking, a 16:10 screen ratio is going to be a huge reason why.