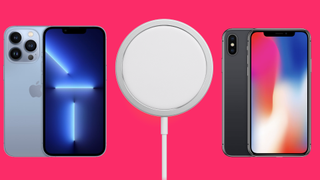 Rumors of a new iPhone are a tradition that began as far back as the iPod Photo in 2004, when video was a constant rumor to feature for Apple’s music player.

But the one rumor that has built up traction for the iPhone in recent years has been a replacement to the lightning port. While many users want to see USB-C appear, it already seems that it’ll be a useless addition.

Recently we’ve seen Apple take strides in wireless charging, first with the industry-standard Qi charging, followed by its own take with MagSafe charging, starting with the iPhone 12 series in 2020.

This only looks to be the start of the portless iPhone, but if you already own an iPhone 12 and above, you may already own a portless smartphone without realising it.

From the first iPhone in 2007 to the iPhone 4S in 2011, users could only charge these devices with a 30-pin to USB 2.0 wire, in a time where we would manage our content through iTunes on Windows 7 and Mac OS X.

But since the iPhone 5 in 2012, a new Lightning port was introduced by Apple, saving space while also allowing for future USB standards to be introduced, such as USB 3.0 and USB-C, bringing in fast charging and faster transfer speeds with newer iPhone in the following  years.

The iPhone 8 series and iPhone X in 2017 were the first iPhones to bring Qi wireless charging to the devices, giving users another method of charging instead of using the Lightning port.

Having spent many hours helping people cleaning out dust and dirt from lightning ports (in a previous job), I can attest to how much more convenient wireless charging was when it arrived – especially when people found their Lightning ports weren’t working well.

However, it could be awkward to position the phone on a Qi charging mat, and it’s still slow to charge an iPhone from 0% to 100% with just this method.

With the proprietary feature of MagSafe arriving to the iPhone 12 series in 2020, it gave users a much better experience in making sure their phones would charge without fail, and slightly faster, alongside a plethora of accessories that MagSafe enabled.

However, rumors have been growing of an iPhone that has no ports at all, with just WiFi and wireless charging to manage an iPhone when the time comes. And that time, reader, has already come – Apple just hasn’t said it out loud yet.

You’ve been using a portless iPhone since 2017

We manage our content through an internet connection more than ever, whether that’s through Wi-Fi or 5G.

We also charge them through the many accessories of Qi charging and MagSafe on our desks, bedside tables or in our vehicles. Stores such as IKEA already offer furniture with Qi charging – we place our devices down on these products and don’t think about it soon after we buy them.

It’s the paradoxical need of wanting something without realising it’s already happened. While the lightning port has been in iPhones since 2012, it’s already been abandoned by Apple and countless users alike.

Sure, not everybody is using these wireless features yet, but they’re available, and we’re just waiting at this point for Apple to pull the trigger on a smartphone that relies on them entirely.

There will almost certainly  come a time when a portless iPhone is showcased at an event, with another Apple representative citing the ‘courage’ this takes, in the same vein the company took when the headphone jack was removed in 2016 with the iPhone 7 series.

Instead of wondering when USB-C may appear for the device, we should be focusing on when a truly portless iPhone will arrive. Given how easily we can get by without using our current iPhone ports already, we can’t imagine it’ll take too much longer, either.