What It's Really Like at 'Hacker Summer Camp' The Black Hat and Defcon conferences were one big party in Vegas. You needed to be there to understand. 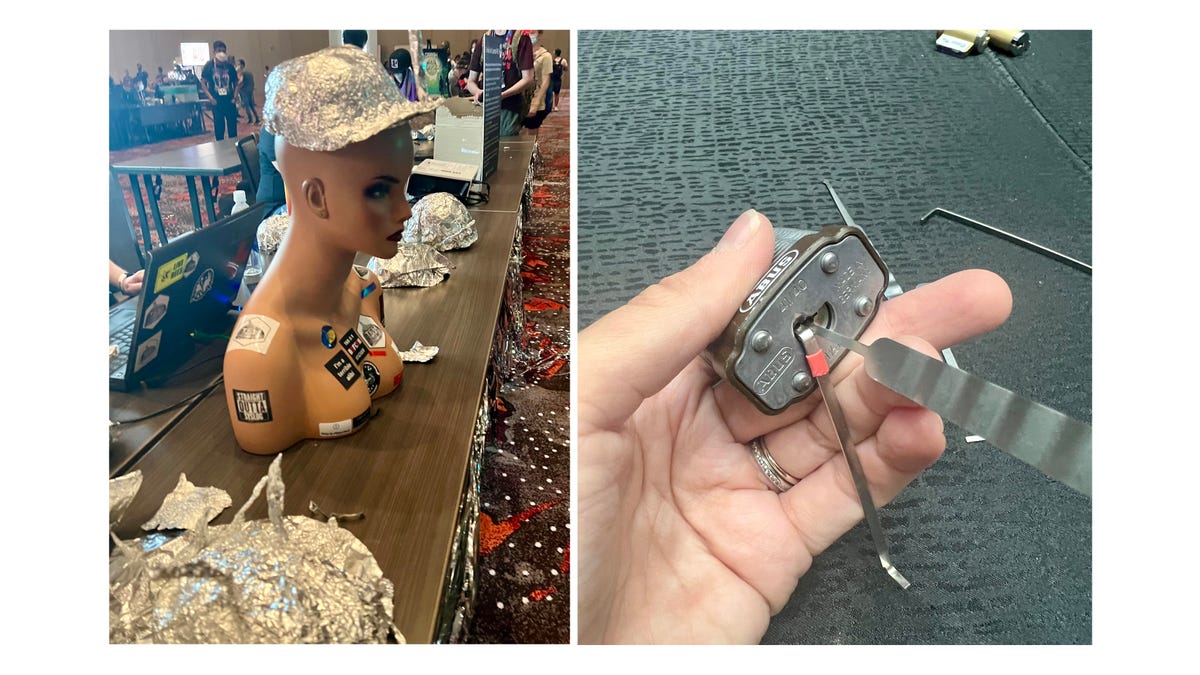 The annual Black Hat and Defcon hacking conferences earlier this month in Las Vegas brought together tens of thousands of hackers and cybersecurity professionals.

Many experts say that online threats have never been greater, with both state-sponsored and criminal gangs targeting companies with ransomware and other cyberattacks.

One moment, security experts are expressing concerns about cyberattacks stemming from either Russia’s continued war against Ukraine or a military conflict between China and Taiwan. The next, Elijah Woods — yes, Frodo from Lord of the Rings — is spinning tunes at a party in Allegiant Stadium in Las Vegas.

Welcome to the Black Hat and Defcon computer hacking conferences or, as the industry calls them, “hacker summer camp.”

The annual events, which happen back to back, bring tens of thousands of cybersecurity professionals and other colorful characters to the Vegas strip each year to hear about the latest in cybersecurity tech, as well as what creative ways people are using to try to break it.

At this year’s events, which took place earlier this month, geopolitics cast a wide shadow — from the war in Ukraine to the upcoming midterm elections — illustrating just how pervasive cyberattacks have become in our lives.

At the more business-focused Black Hat, Chris Krebs, former director of the US Cybersecurity and Infrastructure Security Agency, specifically urged companies to start looking at how they could be affected if China invades Taiwan.

Later in the week, misinformation and election security were big topics of discussion at Defcon, known for drawing a more eclectic collection of young professionals, as was the right to hack and repair tough-to-fix medical equipment like motorized wheelchairs.

What makes these conferences unique is the mix of buttoned up security talk and the kind of activities you’d expect to see from a group of hackers. Crowds packed Defcon’s Social Engineering Community Village to watch teams use their best “vishing” skills to try to get companies to hand over potentially sensitive information, proving that you don’t need computer skills to be a great hacker.

Defcon contests to build the best signal-blocking tin foil hat or construct the fastest contraption for cooling a beer down from 100 degrees drew countless entries. Meanwhile, the “Wall of Sheep” listed the devices of those who didn’t do enough to secure them and there was rarely an empty seat at its always popular lock-picking village.

This year’s attendees appeared to be making the most of the experience. Talks were packed and so were the parties. In particular, Defcon’s crowds managed to overwhelm the nearby hotels and casinos. Just getting a morning coffee involved an hour wait.

There was the usual crop of company-sponsored Black Hat receptions including one where Wood DJed at the new home of the Las Vegas Raiders while attendees indulged in prime rib and truffled mashed potatoes at a party thrown by Noname Security. As usual, Defcon’s trademark pool, hotel and other parties stretched into the wee hours of the morning and probably made more than a few people miss their morning meetings.

All of that took place despite the Biblical-level storms and flooding that pummelled Las Vegas throughout the week, turning its streets into rivers, swamping some of its famous casinos and leaving the city feeling bizarrely muggy.

That said, the mood at Defcon seemed a bit more mellow and weirdly, more well behaved, than in years past. Maybe it was COVID worries or a lack of party funding stemming from the drop in crypto. Maybe people just returned after a multi-year hiatus and realized that they’re just not as young as they used to be.

Oddly, one of the most fun gatherings took place at sunrise, rather than after dark.

For the four days of Defcon, a group of brave and very sleepy souls took to the Las Vegas Strip at 6 a.m., sidestepping giant puddles, broken glass and passed-out partiers to run a 5K together. On the final day of Defcon, they were some of the happiest people in Vegas.

You could argue that’s fitting. The week of Black Hat and Defcon can often feel like an epic road race. It’s both exciting and exhausting. And when it’s finally over, you’re happy to go home but already looking forward to next year’s event.