Why you can’t pre-order the Apple Watch 7 yet 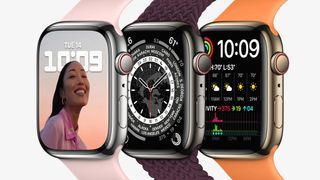 Today is iPhone 13 pre-order day, but the Apple Watch 7 is conspicuously absent from the list of new devices you can buy ahead of release.

Most of the tech Apple showed off at its September 14 event can currently be pre-ordered, like the four iPhone 13 members as well as the new iPad 10.2 (2021) and iPad mini (2021) – the only product shown off you can’t put money down for is the company’s new smartwatch.

Why is this? Well, the Apple Watch 7 release date hasn’t be confirmed. While all those other listed products got a September 24 release date, the Apple wearable is only coming “later this fall” according to the company.

So we’ll probably hear more about the Apple Watch later in the year, perhaps around October (as any later would cause the launch to coincide with the season of savings, and Apple Watch Black Friday deals might tempt too many people from the new product).

But why is the Apple Watch 7 later than its buddies? Well we don’t know for sure, but rumors before the launch event suggested Apple was facing some serious production issues.

Apparently, the slight differences between the new wearable and the Apple Watch 6 had caused some hiccups in the production process, which is understandable when you consider how Covid did and is affecting factories around the world.

With the Apple Watch 7 delayed, you’ve got some more time to pick up an older device like the Apple Watch 3 or Apple Watch SE, two devices the company is keeping around as budget and mid-range members of its family. If the new device doesn’t tempt you – and with its limited number of upgrades over the older model, that’d be no surprise – there’s no need to wait for a new smartwatch at all.

When the Apple Watch 7 finally does launch, we’ll bring you our review so you can see if it’s truly worthy of your money or not. And if, after waiting a few months, you decide it’s not for you after all – well no problem, because Black Friday will be just around the corner.