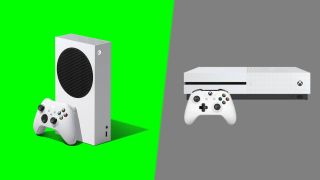 Xbox Series S vs Xbox One S: what’s the difference? These consoles might have similar names and look the same at first glance, which is why it can be easy to confuse the two. However, the differences between the Xbox Series S and Xbox One S are stark. So to avoid buying the wrong one, it’s important you know more about what each console offers, and which is the right one for you.

Both consoles are good entry points into the Xbox ecosystem. But which is right for you? There’s a case to be made for either one, depending on your requirements. Let’s take a look at the key differences between the two.

The Xbox Series S is capable of 1440p resolution, upscaled to 4K, 120fps and includes graphical features, such as ray tracing. It might not be as powerful as Microsoft’s flagship Xbox Series X, but it is a next-gen console. The Xbox One S, meanwhile, isn’t nearly as powerful. However, its cheap price point makes it a solid purchase if the Xbox Series S is out of your budget.

We’ve had the chance to spend serious time with both options, which you can read about in our Xbox Series S review and Xbox One S review. That means we can now definitively say which one is better for you.

If you’ve been scratching your head over which Xbox “S” to buy, in our guide below we’ll compare both of Microsoft’s budget-friendly consoles below to help you make an informed decision about which one will suit you, your budget and your gaming preferences.

Both the Xbox Series S and Xbox One S come with similar price points, though we expect the price of the Xbox One S to drop dramatically as time goes on. The Xbox Series S retails for $299 / £249 / AU$499 and is the cheapest next-gen console available.

Specs are where the two consoles differ significantly. The Xbox Series S is Microsoft’s more affordable next-gen console, and while it might not match the Xbox Series X in terms of pure technical prowess, it delivers a massive upgrade over the Xbox One S. Here are the key Xbox Series S specs you need to know:

One important thing to note is that there’s no disk drive on the Xbox Series S, and you’ll only have 512GB of storage to play with. Unlike the One S, though, it comes with a super-fast NVMe SSD instead of an achingly slow mechanical hard drive, and it can be expanded with the 1TB Storage Expansion Card from Seagate.

The Xbox One S might look similar, then, but it’s technologically inferior to the Xbox Series S. It’s a great option if you want to play Xbox exclusives that you missed out on like Gears 5 or Forza Horizon 4, or simply want to give Xbox Game Pass a whirl, but if you want a console that has been designed to last the next five or so years, you’ll want to opt for the Xbox Series S. Here are the Xbox One S specs you need to know about:

The Xbox One S only has one real advantage over Microsoft’s newer model: the 4K HD Blu-Ray drive. If you’re looking for a cheap 4K Blu-Ray player that also allows you to stream Netflix and play games, the One S is a great choice. You could make the case that the Xbox One S has more storage space than the Xbox Series S, but the One S still uses a HDD rather than an SSD, so it has a larger capacity at the expense of speed. In every other department, though, the Xbox Series S comprehensively beats the Xbox One S in terms of technical power and cutting-edge design.

The Xbox One S is a great entry-level system, however. It’s small, quiet and likely to be extremely affordable in the near future. Yes, it won’t be able to deliver the highest quality for gaming, but if that’s not a concern, it’s still a worthwhile purchase. With a similar price point to the Series S for now, though, we’d recommend opting for Microsoft’s newer next-gen console if you have the choice.

Even if you don’t choose an Xbox Series S, you’ll be able to play almost every new game on Microsoft’s older console. They won’t run as well or look quite as good, but you won’t be forced to upgrade to experience key titles that are coming to Xbox Series X and S like Halo Infinite. The Xbox One S is the console to choose if the idea of downloading a game makes your head spin, though, as it’s the only console of the two that has a disc drive.

One area where Xbox Series S benefits significantly is in terms of load times. Thanks to its super-fast SSD, games will load much quicker than they would on Xbox One S, so if you hate waiting around for your games to start, or simply want to upgrade your existing experience, the Series S is the way to go.

It’s also certain that future games will leave the Xbox One S behind eventually – developers will increasingly rely on the newer system’s power as the years go by, and the install base of the new Xbox consoles grows.

With comparative price points (for now) and similar sleek designs, the Xbox Series S and Xbox One S are easily mistaken at a glance. Delve deeper, though, and the power gap between Microsoft’s two cheap consoles become abundantly clear.

The Xbox One S will soon be seen as a legacy system, unable to provide the next-gen bells and whistles like ray-tracing and blazing fast load times, but it’s a tempting value proposition nonetheless, particularly if you can find a good Xbox One S deal.

The Xbox Series S, however, is the console of choice for those looking to experience the next-generation of gaming at a superb price point. It’s digital-only, of course, so you’ll be at the mercy of your internet connection when it comes to downloading games. If that’s a problem, the Xbox Series X might be the next best choice.