The AAXA P8 is small and cheap even compared to other portable projectors I’ve reviewed. The Nebula Capsule is almost as minuscule but it’s a whopping 20% more expensive. Impressively, the P8 has a full-size HDMI input, Bluetooth and a headphone jack. Disappointingly, it’s not powered by USB, so you have to use the included power adapter, which adds bulk to an otherwise minuscule package. It also lacks a battery. The image quality is fine, given its price and size, but like its bigger brother, the P6X, light output is its main strength.

The P8 is a lot brighter than it has any right to be. I measured 230 lumens, which is around half what the P6X puts out but a huge 2.5x what I measured with the Capsule. Plus, there are a handful of streaming apps built in, which is definitely convenient. So overall, for the price, you get a big image from a tiny, tiny projector.

The P8 is not an HD resolution projector. It’s barely more than standard definition with 960×540 pixels. As a result, the pixels can be quite obvious and visible with all but the smallest of projected images. Today the cheapest TVs have at least HD resolution but projectors are a different animal. Given the size and price of the P8 it’s neither unexpected nor a deal breaker.

AAXA claims 430 lumens of light output, and I measured approximately 230 on the P8. To put that in perspective, the similarly sized and priced Anker Nebula Capsule puts out 85, while the more expensive Xiaomi Mi Smart Projector 2 only managed 162. The P8 is even brighter than the more expensive Samsung Freestyle, which puts out 197 lumens despite its $800 price tag. The bigger P6X puts out 437.

There’s no lens shift or zoom: Focus is achieved via a small wheel on the side.

The LEDs are rated for 30,000 hours. You’re far more likely to lose the P8 between the sofa cushions before the LEDs die out.

There’s a full-size HDMI input, which just makes the P8 easier to live with compared to some projectors that use micro- or mini-HDMI and require an adapter. Surprisingly, for the size and price, there are a handful of built-in streaming apps. Netflix and YouTube are the headliners, joined by Twitch, Vimeo, Haystack News and Tubi.

If you dig into the P8’s menus you can find the much-dreaded Aptoide store. This is a semi-offshoot of the Google Play Store: There are some apps you’ll recognize and a lot that you won’t. Worse, the majority of them don’t work as you’d expect. Aptoide is common among lower-priced projectors.

Like all inexpensive projectors it uses a mobile version of Netflix, more like what you’d find on your phone. This means the interface is less user-friendly using a remote, which you have to use since there’s no AAXA app. It also means you can’t cast to the projector from your phone since Netflix thinks the projector itself is a source. So, oddly, you could theoretically cast FROM the projector TO another display. I didn’t test this, but that’s what it says on screen. It says a lot of things on screen, like other error messages, pop-ups that are difficult to get rid of, and more. I did, eventually, get it running, so it’s in there. Just don’t expect the smooth experience like you get on most other devices.

YouTube works as you’d hope, though, letting you pick what you want on your phone and cast it over to the projector (oddly, labeled “ATV_229” not P8 or AAXA).

There’s a single 2-watt driver. I didn’t expect much deep bass and room-filling sound out of something the size of a tweeter but this speaker is pretty quiet. Fortunately there’s Bluetooth or a headphone jack if you prefer analog, so you can add an external speaker (which I highly recommend).

Another disappointment is the inability to power the projector using USB. Instead, it comes with a standard power adapter wall wart. There’s a USB-C input on the side, but it doesn’t power the unit. A projector this small, powered off a USB battery pack, would be amazing. I’m sure we’ll get something like that eventually but in the meantime you’ll need to lug the adapter around to use the P8..

The tiny remote is as long as one of my fingers and squeezes in all the necessary buttons, but hard to use in the dark as they’re all the same size and shape.

I pitted the P8 against the AAXA P6X and the Anker Nebula Capsule. The Capsule is a likely competitor for the P8, at roughly the same price and more or less a similar size. One’s a cube, the other’s a cylinder, but both are “pocket sized.” The P6X is both a little larger and a little more expensive. It’s in the price ballpark, though, and really it’s only slightly larger. I connected them to a Monoprice 1×4 distribution amplifier and compared them side-by-side-by-side on a 102-inch 1.0-gain screen.

The P6X is so much brighter than the other two it almost seems like a different class of projector. It has 437 lumens vs the P8’s 230. The Capsule is barely visible in comparison, with only 85 lumens. In fairness, the P6X is more expensive and larger. Larger being relative when we’re talking tiny projectors. Picture quality isn’t that much different between the AAXAs, other than the brightness. Which is to say, it’s not great, but given the price and size, not unacceptable.

Focusing, pun intended, on the P8 and Capsule, the comparison is closer… eventually. The P8’s picture quality out of the box is abysmal. It’s so over-sharpened it looks like the “before” image in an exposé about the evils of edge enhancement. Thankfully, there’s a modicum of picture adjustments, something that can’t be said of the Capsule. Switching to the User picture mode and dialing the Sharpness down from “cartoon” to “this is as good as SD looks” does wonders for the overall image.

With that done, and the color temp in the warm mode, it gives the Capsule a run for its money. While the Capsule doesn’t have any picture adjustments, it looks fine out of the box. It could look better, I’m sure, with some tweaking, but we’ll never know. Does the inclusion of picture settings mean the P8 can look better than the Capsule? Sort of. More that it brings them in line and they’re both equally “off” just in different ways. Colors aren’t accurate. Color temperature isn’t either. It’s not quite cartoonish, but neither look particularly realistic either.

One unexpected aspect of the P8’s performance is its contrast ratio. I measured an average contrast ratio of 558:1, which is significantly better than anything under $1000 that I’ve measured in recent memory. So it looks far less washed out than the Capsule, which averages just 192:1. So that, combined with the added brightness, does push the P8 in front in terms of overall image quality.

Do these videophile particulars matter for sub-$300 projectors? Probably not. I’d say other aspects are more important, which brings us to what I think are the two most important differences between the Capsule and the P8: brightness and batteries.

The P8’s brightness is borderline remarkable for its size and price. It puts far more expensive projectors to shame. At ~50-inches this is bright enough to see with some lights on. Even at 100 inches, it’s a usable image. Other than the P6X I don’t know of another projector this size that can do that. I’m not saying you should use an inaccurate, 540p projector as your main TV… but for $250 you could do worse.

The Capsule can’t compete on brightness, but it does have a battery. The P8 does not. That’s a game changer, or maybe a different product category. You can put the Capsule in a backpack and watch a movie on the side of a tent. I think, for a lot of people, that’s the main use for a projector this small. The P8 just can’t do that — not without a very long extension cord. The P6X sure can, though, for a bit more money and a larger unit.

Tiniest of the tiny

The P8 is literally a pocket projector. You can fit it in your pocket. But it’s far brighter than other projectors this size. It even has built-in Netflix and YouTube as an added bonus. I wish it recharged via USB-C, making it truly off-the-grid portable. But if off-the-grid portable is what you want, the P6X is only a little bit more expensive (and larger), or the Capsule is just as small but far dimmer than both.

It’s a pretty specific niche the P8 fits into: tiny size, tiny price, huge brightness and no battery. An anomalous amalgam of attributes that somehow works. It’s hard not to like 230 lumens for less than $250. 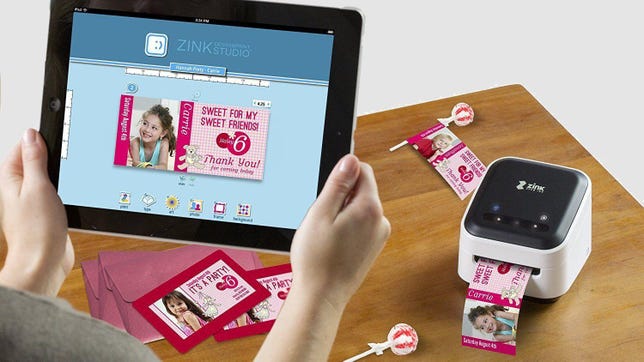 Get a Zink Happy wireless photo and label printer for $69.99