Acer Swift Edge Review: World's Lightest 16-Inch OLED Laptop Ready for Work Wherever You Are The AMD-powered Swift Edge makes it easy to work anywhere without sacrificing screen size to do it. 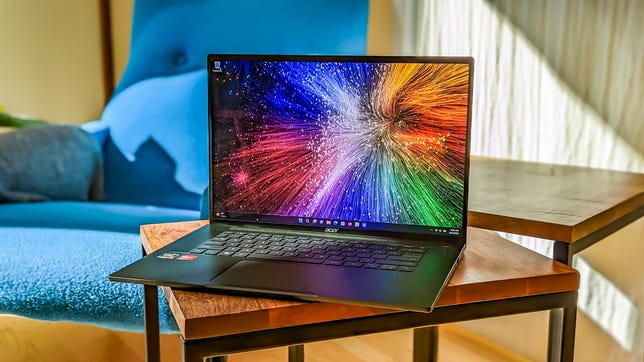 The Acer Swift Edge is so light you’ll question whether you packed it in your bag when you leave for work or class. It weighs just 2.6 pounds (1.2 kilograms) and is only 14 millimeters (0.6-inch) thick. Why the Swift Edge stands out though is that it’s so lightweight and has a brilliant 16-inch OLED display, making it easier to get work done from just about anywhere. And while it needs extra table space compared to a traditional ultraportable like the Dell XPS 13, it’s still remarkably compact. I had no problem using it on a cramped commuter train, and then quickly slipping it into my backpack when I reached my stop.

The Swift Edge is designed for hybrid workers, which is to say, people working from home, an office and a few places in between. It has strong performance for productivity and entertainment, decent battery life and enough ports to make life on the go less of a hassle. Overall, it’s a winner if you’re looking for a bigger screen and a lot less weight.

Made from a magnesium-aluminum alloy, the Swift Edge is strikingly similar to LG’s Gram 16. The Acer is slightly slimmer and weighs a touch less, though. For however much I love how light it is, the Swift Edge’s weight is a double-edged sword. Despite wanting lighter-weight devices, there’s a point where a laptop gets too light and it’s perceived as cheap or flimsy.

The alloy used for the chassis is twice as strong as normal aluminum, Acer says. There’s a little flex in the lid, but overall the Swift Edge feels rigid and sturdy. Regardless, it’s difficult not to equate weight with sturdiness and some might feel the Swift Edge is flimsy or even plasticky. To be clear, the Swift Edge is made from metal — only the thin display bezels are plastic — and it should stand up to a daily commute just fine.

The first configuration available in the US, model SFA16-41-R7SU, is $1,500 and well-equipped for office or school use. It’s currently sold by Costco or direct from Acer. The same US configuration sells in the UK for £1,599. Pricing and availability aren’t available for Australia at the moment, but the UK price converts to roughly AU$2,610.

Acer also expects to offer the Swift Edge with an AMD Ryzen Pro 6000 U-series processor. The AMD Pro processors have a Microsoft Pluton security chip embedded in them for chip-to-cloud protection for your data and identity. Based on the security architecture used in the Xbox One game console, Pluton adds better protection against physical attacks as well as firmware attacks, as it gets regular firmware updates as part of Microsoft’s Patch Tuesday.

The Acer Swift Edge performed about how I expected: excellent for general office, home and school use including some light content creation tasks. AMD’s Ryzen U-series processors are made for thin-and-lights like the Swift line; look for the high-performance H-series for gaming and content creation. The Ryzen 6800U is strong competition for Intel’s premium Core i7 P-series processors that you’ll regularly find in laptops like the Swift Edge. AMD’s integrated graphics performed better than expected, too. Also, although its memory is soldered on and can’t be upgraded, the configuration has 16GB of RAM, which is enough for this model. (You can see how its benchmark test results stack up against other systems in its class at the end of this review.)

As for battery life, the Swift Edge reached 9 hours, 22 minutes on our streaming video test with the display brightness at 50%. While others in its class might run longer, OLED displays in general require more power, as do 4K screens. With that in mind, more than 9 hours for a 4K OLED laptop is good. If you need longer battery life, look for a model with a lower-resolution LCD such as the LG Gram 16 two-in-one.

The 16-inch (16:10) 4K (3,480×2,400 pixel) OLED display looks amazing, though. It’s also VESA True Black HDR500 certified with a peak brightness of 616 nits with HDR on. Otherwise, it maxes out at 400 nits, which is good enough for most indoor use. Colors are vibrant and the display covers 100% DCI-P3 color range, which is what you want for creating content online and off.

The rest of the Acer Swift Edge is pretty great, too. There’s a fingerprint reader on the power button. The speakers across the top above the keyboard pump out audio loud and clear. Acer put in a 1080p webcam capable of sharp, detailed video even in less-than-ideal lighting. There’s no webcam shutter, physical or electronic, but there is a mic mute on the keyboard.

Unlike many premium laptops, the Swift Edge has a good deal of connection options, including two high-speed USB-C ports on its left side. However, I really wish laptop-makers would be better about separating USB-C ports, having at least one on each side. Not only is it more flexible for charging, but it also makes connecting docks and adapters easier. It’s certainly not a deal-breaker but it is an annoyance nonetheless. The same goes for some of the extra software that’s pre-installed here. You can remove it easily enough but when the price of the laptop gets to $1,500, it would be nice to see less promotional software.

The keyboard is the weakest part of the laptop, however. A few of the keys, such as the Caps Lock, Ctrl and Shift, are smaller than usual and threw my typing off for a bit until I adjusted. It’s just weird, given how much space Acer has to work with on the keyboard deck. Plus, the keys felt slightly off, as if a few of them were higher than the rest. It could just be that I have an early production sample or a symptom of having such a thin base beneath it. Again, I adjusted to the feel, but it could be better. The large touchpad, on the other hand, was responsive and felt good, with a pleasingly smooth finish. It has an antimicrobial coating, too.

If you’re tired of working on a small laptop screen but don’t want to lug around a bulkier, heavier laptop to have a bigger display, the Acer Swift Edge solves that problem. It has strong performance for its class, decent battery life, a helpful selection of ports and fast wireless, plus a beautiful OLED screen to boot.

How we test computers

The review process for laptops, desktops, tablets and other computer-like devices consists of two parts: performance testing under controlled conditions in the CNET Labs and extensive hands-on use by our expert reviewers. This includes evaluating a device’s aesthetics, ergonomics and features. A final review verdict is a combination of both those objective and subjective judgments.

The list of benchmarking software we use changes over time as the devices we test evolve. The most important core tests we’re currently running on every compatible computer include: Primate Labs Geekbench 5, Cinebench R23, PCMark 10 and 3DMark Fire Strike Ultra.

A more detailed description of each benchmark and how we use it can be found in our How We Test Computers page.

The best laptops in every category