Airports With the Best Free Wi-Fi in the US Airport Wi-Fi is often a drag, but a few locations stand above the rest. 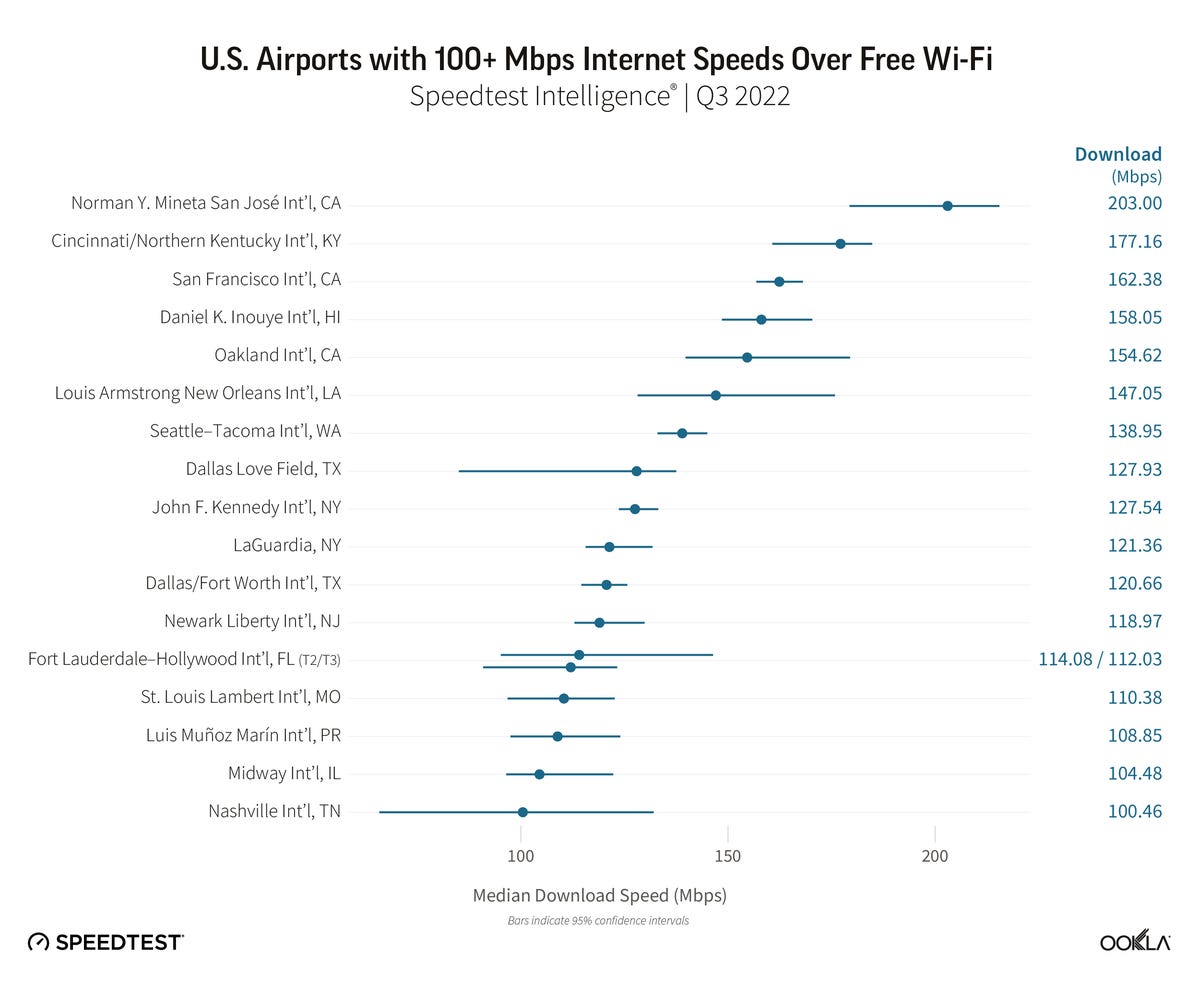 Free airport Wi-Fi can be frustrating when you’re trying to download episodes of Netflix’s Old Enough before a six-hour flight. Luckily, the folks over at Ookla, who run the internet speed testing website Speedtest.net, have a new report detailing the best free airport Wi-Fi in the US.

The fastest free airport Wi-Fi in the US isn’t at San Francisco’s SFO, a major hub for tech giants such as Salesforce and Uber. Nor is it at New York’s JFK, the sixth busiest airport in the US. The fastest free Wi-Fi, according to Ookla’s speed tests across airports in the US, comes from San Jose International, which has a median download speed of 203 Mbps. San Jose International’s top placement makes sense as there are many leading tech companies situated nearby, such as Google, Apple, Meta and Adobe.

Ookla gathered this data from people who use either the Speedtest app or its website to test download speeds.

With the popularity of YouTube, TikTok, Netflix and Disney Plus, demand for streaming video content is the highest it’s ever been. This demand has forced Netflix to reduce streaming quality in parts of the world as internet service providers don’t have the systems in place to serve the needs of all customers. Airports, too, have been upgrading systems to help meet consumer bandwidth consumption. To illustrate how quickly things have changed, back in 2014, Bush Intercontinental in Houston ranked as having some of the fastest airport Wi-Fi in the world. Now it ranks near the bottom in the US.

The slowest-performing free Wi-Fi is at Pittsburgh International, Ookla said, with a median download speed of 5.23 Mbps. Houston’s major airports, George Bush Intercontinental and William P. Hobby, have speeds of 8.79 and 8.90 Mbps, respectively. Southwest Florida is the fourth slowest free airport Wi-Fi, but sees a significant jump over Houston, at 18.51 Mbps. And Logan International in Boston isn’t significantly faster, at 18.87 Mbps.

Ookla did find that some airport lounges have faster speeds than the general airport area. But gaining access usually requires some special form of membership. Using paid options at airports from companies such as Boingo, Passpoint and Skyfi also showed faster speeds, but varied between airports.