Amazon Fire HD 8 (2022) Review: Value Pricing and Bright Screen Remain Its Best Assets The next-generation Fire HD 8 tablet is lighter and has an upgraded processor that improves performance. But it costs $10 more than the previous model. 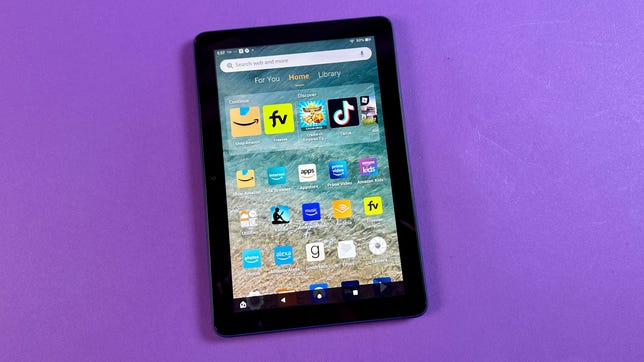 For the last several years the Fire HD 8 has arguably been the best budget tablet out there, particularly for Amazon Prime members, who can take advantage of all the included content that goes along with that membership. That doesn’t mean The HD 8 is a great tablet — it isn’t — but it performs reasonably well for its modest price and has a display that’s just sharp and bright enough.

Available in a few versions, the “all-new” Fire HD 8 (2022) starts at $100 (£100 or roughly AU$175), making it $10 more than the previous model. It’s equipped with 2GB of RAM and 32GB of storage, plus an expansion slot to add more of the latter via MicroSD. The improvements from the 2020 model are relatively modest though not insignificant: Not only is the new-for-2022 HD 8 slightly slimmer and lighter but thanks to an upgraded processor and software optimizations, it has a 30% performance boost, according to Amazon, along with an additional hour of battery life (13 hours vs. 12 hours).

Are those upgrades going to make you want to ditch your Fire HD 8 (2020) for this new model? Probably not, but you are getting what feels like about a 15% better tablet for a little more money. As a result, the latest Fire HD 8 remains easy to recommend to those looking for an inexpensive tablet for media consumption — but only when it goes on sale.

What makes the Fire HD 8 worthwhile

Aside from its affordable price, the HD 8 has a few things going for it. As I said, while HD 8’s screen still isn’t great — it’s got a pixel density of 189 ppi with a resolution of 1,280×800 pixels, a spec that just qualifies as high-definition (it’s basically 720p, not 1080p) — it’s good enough for many people and fairly bright. This is also a relatively compact tablet that’s more on par with Apple’s iPad Mini than the standard iPad in terms of size, though the HD 8 has an aspect ratio of 16:10 while the iPad Mini’s aspect ratio is 6.1:4.

I spent most of my time watching videos on the new Fire HD 8 with a little Kindle e-book reading and web browsing mixed in. I also played a couple of games and did a Zoom call. The main downsides of the tablet are that it remains more sluggish than a higher-end tablet like the iPad or just about any iPhone or Android smartphone from the last three years (it does help to have a fast internet connection to work with).

While the CPU has been upgraded, I sometimes wished Amazon had equipped the tablet with an even faster processor. Also, the 2-megapixel front-facing camera is mediocre, so you’re going to look grainy on video calls (for some of us, that’s a good thing). And finally, the sound quality from the integrated speakers is only OK and not up to the level of higher-end tablets and phones. You might be better off with headphones — either via the headphone port or Bluetooth.

All the new HD 8 models are powered by a Mediatek hexa-core MT8169A processor, which is a step up from the quad-core MT8168 found on the HD 8 (2020). However, the larger Fire HD 10 is powered by an octa-core Mediatek MT8183 processor. That’s why we tend to suggest you step up to the Fire HD 10, which feels zippier and has a larger, higher-resolution display, if you want a better overall tablet experience.

For $20 more, you can step up to the 2022 version of the HD 8 Plus ($120, £120), which has the same chassis but includes an additional 1GB of RAM (3GB total), wireless charging (no dock or wireless charging pad is included) and an improved 5-megapixel rear-facing camera (it was previously a 2-megapixel camera). I think I’d prefer an upgraded front-facing camera, but some people will use this tablet for capturing video and images — just don’t expect great quality.

The extra RAM does make a slight difference, as I noticed that apps launched a touch faster. It can also help with multitasking and more graphically intense applications. As I like to say, it never hurts to have more RAM. And $20 isn’t too much to pay for it along with the wireless charging and rear camera upgrade. Additionally, the Plus model comes with a 9-watt power adapter while the standard HD 8 only includes a USB-C charging cable. So it is tempting to opt for the HD 8 Plus (2022).

A cheap tablet parents can give their kids

The Fire HD 8 has always been a handy tablet for consuming Amazon video content, ebooks and music, and it’s still useful for Prime members. You can also watch other streaming video services such as Netflix and Hulu, but the selection of apps in the Amazon Appstore has always been limited compared with what’s available for iOS and Android, especially when it comes to games (Android tablets have their own app limitations compared to what you can get on iPads). While you still can’t find an app for Vudu, HBO Max is now available, so that’s some good news.

The tablet runs on Amazon’s latest Fire OS, a customized version of Android 11, which was released in the fall of 2020. And while Amazon doesn’t encourage it, you can in theory install the Google Play store by following some instructions on the internet. That would allow you to run a lot more apps. But some people may feel intimidated by the process and it’s become trickier with some of Amazon’s latest Fire tablets like the new Fire 7 (2022). I’ve yet to try installing the Google Play store on the new HD 8, so can’t vouch for whether it works.

The previous Fire HD 8 was popular with parents wanting an affordable tablet for their kids. If that’s who you’re buying this for, the standard HD 8 is going to be just fine. However, Amazon is also targeting parents with the Fire HD 8 Kids ($150), which comes with a kid-friendly case, a one-year subscription to Amazon Kids Plus content and two-year replacement guarantee should anything happen to the tablet.

And to complicate matters a bit, there’s also the Kids Pro version ($150) that Amazon says is designed for kids aged 6 to 12 and includes “access to a digital store where kids can discover and request purchases to parents or guardians for eBooks, apps and games.” And for the first time, the Fire HD 8 Kids is available in a Disney Design Bundle that includes Mickey Mouse and Disney Princess cases for $160.

That’s a lot of Fire HD 8 variations. But the middle model in Amazon’s tablet lineup, which includes the aforementioned step-down Fire 7 ($60) and step-up Fire HD 10 ($150), hits the sweet spot for a lot of folks, especially when it goes on sale during the year.

When Amazon upgraded the Fire HD 8 in 2020, it made a couple of notable design changes, including moving the location of the front-facing camera and adding USB-C charging, plus wireless charging for the HD 8 Plus, that made it feel like an overall more significant upgrade than the one you get with this year’s Fire HD 8 (2022). But given all the supply chain issues and inflationary pressures, it’s about what I was expecting from a new model and in line with Amazon’s formula for incremental upgrades — most notably that aforementioned hexa-core processor — that move the needle forward enough to justify a small price increase.