Anycubic Kobra Go 3D Printer Review: An Expert and a Novice Weigh-In The price is right for beginners, but the setup feels more appropriate for intermediate 3D printing hobbyists. 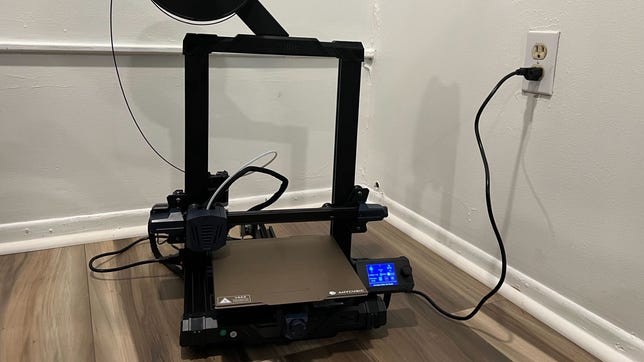 Anycubic’s updated 3D printer lineup has impressed us this year, with products like the Kobra Max and the Photon M3. Another new addition, the $200 Kobra Go, is an ambitious attempt to crack the budget 3D printer code.

$200 at Amazon
Get Price Alerts

While I’m an advanced 3D printer user, this is a product aimed at beginners, so I also asked my colleague Russell Holly to test the Kobra Go and compare it to other budget 3D printers he’s tried, such as the Anycubic Kobra. I’m including his observations alongside my own.

The Kobra Go is shipped in semikit form. That means while you will have to put together a lot of the mechanical pieces, you don’t have to run cables or use any tools apart from the included hex wrenches.

The upside of a kit is that you can learn what all the pieces are, and to some degree what they do, as you build it, though the manual doesn’t go into too much detail. The assembly is certainly something that can be done by just about anyone, and is worth the time because it introduces you to some pretty advanced features.

Russell: Anycubic’s general ease of use and even greater ease of repair is frequently marred by less-than-stellar instruction manuals, and the Kobra Go is no exception. User error aside (I admit to missing a page in the manual, which was totally on me) the manual regularly changes the perspective of the printer when trying to show you how to connect different pieces, causing the user to stop multiple times to confirm it’s not being installed backward.

It’s not that the instructions are unreadable, in fact far from it, but there’s a lot of room for improvement given the audience these printers are aiming for. I would go so far as to suggest a video demonstration for first-time 3D printer owners would be appropriate for something like this.

While most 3D printers in the $180 to $220 range are pretty similar in terms of print quality, the addition of auto-bed-leveling at this price is a compelling selling point for the Kobra Go. I’ve said many times that ABL should become the industry standard and Anycubic including it in a printer in the extreme budget section is a good sign. Having ABL on every machine would make 3D printing much more accessible.

The quality from the CNET test print showed some instances where the Kobra Go isn’t calibrated quite right, but with a little effort and some tweaking of the software, you should be able to print quality models reliably.

Russell: The print quality for the Kobra Go is exactly what I expected for a $200 3D printer. I wouldn’t use this for printing something with high detail or lots of fine edges, but simple shapes or pieces for a larger project can easily be printed on this machine. With a little bit of practice, it wouldn’t be all that limiting for most projects.

When it comes to making a budget 3D printer, there’s a balance between cost and usability. By selling the Kobra Go in kit form, Anycubic can save money in assembly and shipping, giving the company scope to add auto-bed-leveling and other premium features.

Whether you’re brand-new to 3D printing and looking to learn as you go (and willing to put in some effort to build it), or if you’re just looking for a cheap 3D printer with ABL, the Kobra Go makes a good case for taking a DIY approach.