Apple TV 4K 2022 Review in Progress: Cheaper Price, New Chip Only Go So Far The $129 price is still higher than streaming device rivals, however, so the question remains: Who is this for? 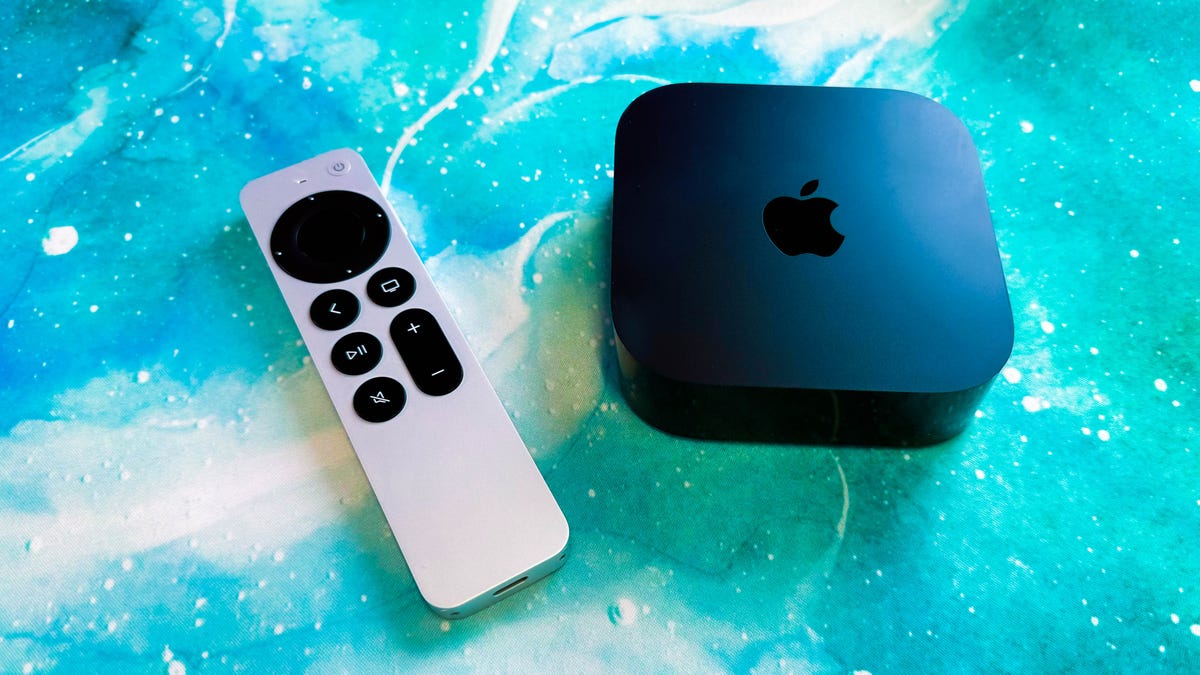 Apple dropped a surprise last month when it revealed a new Apple TV 4K streaming device at a starting price of $129 (£149, AU$219), $50 less than the previous version. The new box has a faster A15 Bionic processor under the hood and an updated Siri Remote that swaps out the proprietary Lightning connector for USB-C. The company also killed off the Apple TV HD, a long-overdue mercy for an overpriced box that made little sense.

If those changes sound minor, that’s because they are. In using the new Apple TV 4K over the past few days, I have yet to see any real difference compared to last year’s device. However, those who have held onto an Apple TV HD, or perhaps purchased the first Apple TV 4K a few years ago, will notice and appreciate the extra speed of a modern chip and might want to upgrade at this point.

For everyone else, the new Apple TV 4K remains an excellent streaming device overall, but it’s still too expensive. If you’re looking for a solid streamer for Netflix, Disney Plus, HBO Max, Hulu and the rest, you’re better off saving money and getting something like the Roku Express 4K Plus or Roku Streaming Stick 4K, Amazon Fire TV 4K Max or Chromecast with Google TV 4K. All stream in 4K HDR perfectly well and cost less than half as much.

While I haven’t had enough time with it just yet to give this a scored review, here are my thoughts from the first few days of using the new Apple TV 4K.

The box itself is a bit shorter and leaner than the older Apple TV 4K and HD boxes, but it still looks like a hockey puck. While it doesn’t tuck in behind a TV like a streaming stick, the updated design should be a bit less conspicuous on a shelf or entertainment console.

The device was a cinch to set up with my iPhone and 2019 TCL 6-Series TV. It didn’t require fiddling with settings to enable Dolby Vision or to allow the remote to control the volume and power on my TV. The Apple TV 4K supports a wide variety of formats, including Dolby Atmos and HDR10 Plus (the latter is also new for this year’s version, but hardly a necessary upgrade).

The Siri Remote looks identical to last year’s model aside from that USB-C charging port. Functionally both are the same, and there still is no remote finder or Find My integration to locate it when it inevitably gets misplaced in the couch cushions. Competitors Roku and Fire TV both offer remote finder features. I guess Apple TV users will have to keep using cases with AirTags.

In fact, Apple includes very little that’s new, even with the $149 128GB version that I tested, which features an Ethernet port and supports the Thread smart home standard. You get the device, a power cable and the remote. No USB-C cable to charge the remote and no HDMI cable to plug into your TV.

The experience is largely unchanged from prior Apple TV boxes. Apps are arranged in a grid, similar to an iPhone or iPad. Running the latest TVOS 16.1, Siri now operates in the lower-right corner instead of dominating the display. As expected from an Apple device, you have access to a host of Apple services including photos in iCloud, the ability to watch content with other Apple-centric friends through Share Play and the requisite apps for Fitness Plus for workouts, Apple Music and Apple Arcade for gaming if you pay for those services.

As for apps, Apple’s TV platform supports nearly all the major streaming services you could want. The apps and streaming services I’ve used all generally loaded quickly with the new A15 Bionic, and worked largely as expected. Relative to last year’s Apple TV 4K, I noticed apps opening a few seconds faster but the increase was nothing substantial.

I do wish more apps like Hulu, Netflix and the NBA allowed for logging in via a phone or computer as opposed to typing in usernames, but that should be a one-time thing. Apple does make it easier to enter text by prompting you to use your likely nearby iPhone whenever a keyboard pops up on your TV.

The Apple TV 4K can control smart home products that work with Apple’s HomeKit, and turning off Philips Hue lights worked without issue (I don’t have Thread set up and therefore couldn’t test that). The streaming box also integrates with HomePod Mini and AirPods, should you want to listen to content on those speakers or headphones. Pairing with AirPods Pro was a snap, and the box recognized them immediately once I took them out of their case. Audio transfer to the earbuds and then back to my TV (when I put the buds back in their case) was seamless.

Speaking of audio, early on in my testing I ran into a really weird bug where the picture appeared but no audio played when the new box was connected to my 2019 TCL TV. I noticed this when playing Deadpool on Disney Plus, Severance on Apple TV Plus and House of the Dragon on HBO Max, for example. Sometimes simply backing out and restarting the video would fix the issue, and other times it would resolve itself after a few seconds. It occurred frequently and across multiple apps, however, which was odd and disconcerting for a streaming player.

I’m not sure what caused this issue and will continue to monitor it as I evaluate the new box. Testing the device on other televisions in CNET’s office worked without issue, so this may have been a temporary quirk of the connection to my TCL TV.

One of the most telling ways to test a new processor is with gaming. Apple has had a complicated history with gaming on televisions, and that saga continues here.

To test the box’s gaming prowess, I fired up 2K’s NBA 2K23 Apple Arcade Edition and Gameloft’s Asphalt 8: Airborne Plus. Graphically these should be among the most intense games on the Arcade platform, which still seems to be mostly filled with mobile-first games.

NBA 2K23 loaded quickly, and the game finally has commentary which brings some console-like quality that was lacking in earlier editions, but that’s where the similarity ends. In my few games, the title looks and feels a bit slower than the console version. Even with an Xbox controller paired to the Apple TV 4K, there is no direct passing and animations lack the fluidity and sharpness of the game on Xbox One, let alone Xbox Series S/X.

Face models are fine, but lack detail in players’ tattoos like D’Angelo Russell and Marcus Smart. Standard basketball game staples like instant replays and quick or batch substitutions also remain absent as do 2K23 game modes like The City.

Gameloft’s Asphalt 8 Plus similarly loaded quickly and played fine using the Apple TV’s included Siri Remote. But there isn’t ray-tracing or other modern graphical improvements that would make anyone confuse this title for a PlayStation 5 or Xbox Series S/X game.

All told, there doesn’t appear to be anything extra that the A15 Bionic brings to gaming on Apple TV 4K. If anything beyond light TV gaming is your goal alongside streaming, get a console instead. They can not only run higher-quality games but also have many of the streaming apps you’d likely want.

Who is the Apple TV 4K for?

This was the question I asked at the end of my prior Apple TV reviews, and I still don’t have a good answer more satisfying than “It’s for Apple fans.”

Apple makes a good box. It’s sleek, fast and more than capable of handling all the basics and even a bit more, so long as you live in Apple’s world of Fitness Plus, Arcade and iCloud Photo Sharing.

But even with the new $129 starting price, it still is one of the most expensive streamers available, and there’s not much that takes advantage of the new A15 Bionic chip. It’s hard to recommend the Apple TV 4K when Roku, Amazon and Google make excellent devices for a fraction of the price.

With streaming services seemingly getting more expensive, your money is better spent on a subscription than on a box. If past history is any indication I wouldn’t be surprised to see retailers offer discounts on the Apple TV 4K this holiday season. The previous 4K model, which started at $179, was regularly on sale for as low as $99 and the HD model, which retailed at $149, fell as far as $79.

For $129, the new Apple TV 4K is a hard sell compared to its rivals. But if its price falls by $30 to $50? Well, Apple could have a compelling TV product once again.

Preorders are now open for the new Apple TV 4K with prices starting at $129. Devices will begin shipping on Nov. 4.