The Apple Watch Series 7 starts at $399 and is coming later in the fall. It was announced at Apple’s event on Tuesday. But the changes don’t seem that dramatic. It has a larger display with thinner bezels, a faster-charging battery that promises 8 hours of use after 8 minutes of charging and a more crack-resistant front crystal. But the battery life — 18 hours — is the same as last year’s watch.

There are also new colors for the aluminum case: blue, green, midnight (black), starlight (a gold-silver blend), and product red. You can add still more expensive upgrades to steel and titanium-cased versions, too.

Apple looks like it’s staying the course on the rest of the watch’s design, contrary to earlier reports of a massively revamped flat design. For anyone expecting a whole new watch (as I was), the seemingly small updates seem like a disappointment. But Apple’s made small changes year-over-year to previous Apple Watches. The only thing truly new about last year’s Apple Watch Series 6 was the addition of estimated blood oxygen.

This year, the updates seem sparse, too, and it doesn’t look that different from a casual distance. The promises of better durability and faster charging do seem useful, although probably not enough for most to consider an upgrade from a recent model.

The larger screen should allow more readable and detailed watch faces, notifications and apps, much like the Series 4’s size increase a few years ago. Apple says it’s 20% larger than the Series 6, and 50% larger than the Series 3. Buttons are larger on the displays, and Apple says 50% more text can be fit on-screen, while the display is 70% brighter indoors in always-on mode. (A new on-screen full keyboard will pop up now for entering text, in addition to scribble and dictation options.)

The display is curved at the corners now, wrapping around the case a bit. I didn’t see this in person yet, but I looked at a 3D model in AR and it shows the subtle effect from the side.

The Watch 7 has an IP6X rating, which is new and promises better dust-resistance. The curved crystal is also 50% thicker, according to Apple, which could lead to less cracking. But we haven’t tested that yet, and don’t know how durable it actually is yet (and won’t know until later this fall, whenever the watch arrives). The watch has the same 50-meter water resistance for freshwater, pool, or ocean swimming as recent previous models.

Apple’s touting the fast-charging features on the Watch 7, which promise 8 hours of battery life on 8 minutes of charging. That is helpful, especially when maybe you’ve forgotten to charge the watch the night before (or for people wearing the Apple Watch to bed for sleep tracking), but the overall battery life for the watch remains the same. Expect about a day and a half of use, based on my previous experience.

Missing, however, are any new health features or sensors. Samsung’s recent Galaxy Watch 4 and last year’s Fitbit Sense started introducing new health sensors like body analysis and electrodermal activity, but Apple hasn’t introduced anything new on the Series 7 health-wise compared to last year. Also absent is any improvement in battery life or a watch face store.

The Apple Watch Series 7 starts at $399, but we don’t know prices for the different sizes, LTE-ready models, or for different materials. Expect prices to ramp up like previous Apple Watches, though.

WatchOS 8 arriving ahead of the Apple Watch Series 7

Apple’s newest version of WatchOS should be here September 20, adding new cycling features, a redesigned Mindfulness app, and Wallet app upgrades. Maybe those updates will be enough for existing Apple Watch owners, and they won’t see a need to upgrade their watches at all.

Apple’s watch lineup has been getting steadily more successful, especially as wearable competitors have consolidated. Apple’s Fitness Plus subscription service, launched at the end of last year, requires the Watch to take advantage of its video workouts. Apple announced a new group workout feature at today’s event, too.

Last year’s Apple Watch SE sought to become a more affordable Apple Watch, but its $279 starting price was still well above budget fitness trackers from companies such as Fitbit. This year, the Watch SE and Series 3 remain on sale, with the SE still at $279 (£269, AU$429) and the Series 3 at $199 (£199, AU$299). International prices for the Series 7 were not announced. 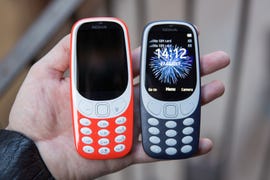 The Nokia 3310 finally gets the 4G LTE update it needs Android 12 rumored to get new widgets and privacy features