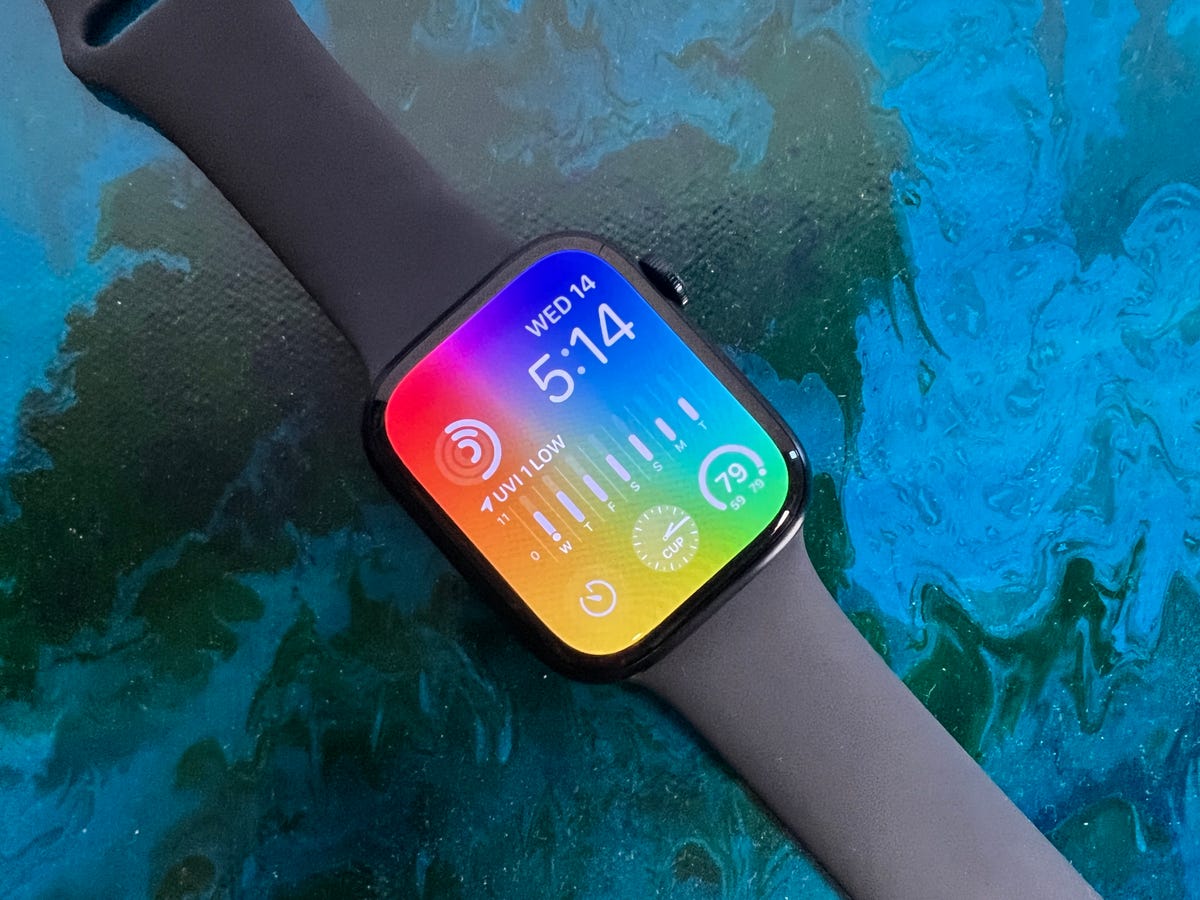 Unless you’re an avid scuba diver or rock climber — or want to look like one — you’re probably deciding between the SE and the Series 8. Both watches run on Apple’s WatchOS 9 software, have the company’s newest chip and are among the first to detect car crashes. That’s in addition to the functionality Apple’s watches have offered for years, like the ability to track workouts, detect hard falls and mirror iPhone alerts.

Which one is right for you depends on what you want in a smartwatch. As someone who primarily uses my Apple Watch for logging exercise, viewing notifications and checking the time, there’s little that I missed when switching from the Series 8 to the SE after testing both for a few days.

The biggest reason to choose the Series 8 over the SE right now is its extra health-tracking smarts, such as its new wrist temperature measurements, blood oxygen saturation readings and the ability to take an electrocardiogram. The Apple Watch isn’t a medical device and shouldn’t be treated as such. But those who want more data on their cardiac and respiratory health to share with their doctors might find the Series 8 to be the better choice.

I think the Series 8’s main benefits will become more clear over the long term. Temperature sensing is still new, but I like the idea of being able to see how changes in my baseline temperature may correlate with how I’m feeling that day. The Series 8’s ultrawideband chip, which isn’t present in the SE, may also feel more valuable in a future where unlocking your car with your phone or watch is just as common as using Apple Pay at the checkout counter.

A larger screen with an always-on display

The Apple Watch Series 8 also has a larger display and comes in 41- and 45-millimeter case sizes, compared to the 40 or 44mm SE. Having a bigger display is nice, but the only thing I missed is the Series 8’s QWERTY keyboard for typing responses to text messages (the Series 7 has this too). On the SE, you can still scribble letters, dictate words or send canned responses, but I like the flexibility of being able to quickly type a couple of words. Those who prefer larger text sizes may also want to choose the Series 8 over the SE.

The Series 8 is also available in a pricier stainless steel finish, and the aluminum version comes in an additional Product Red color option not available on the SE.

Apple says nighttime wrist temperature can be an indicator of overall body temperature, and changes could possibly be caused by illness, jet lag or exercise. Since the Apple Watch doesn’t have a readiness score like Oura or Fitbit, I could see this information being useful for helping me decide whether my body needs extra rest.

The Apple Watch isn’t a medical device and can’t alert you when you’re sick, so it can be hard to know how to use this data. That’s part of the reason why I never check my blood oxygen levels; it’s just another statistic that I’m not sure what to make of. I’ve been wearing the Apple Watch Series 8 consistently for a couple of weeks, but I’m still not sure what to do with this temperature data.

My nighttime wrist temperature is pretty close to my baseline most of the time, but it’s usually a fraction of a degree higher or lower. Sometimes my deviations are as high as 0.37 degrees Fahrenheit above my baseline or 0.55 degrees below the norm. I can’t connect the dots between those deviations and what may have happened to cause them. It’s also difficult to wear the Apple Watch Series 8 consistently overnight since I have to charge it during some evenings.

Still, having another data point like wrist temperature opens up some interesting opportunities for the future. I’m hoping Apple finds new ways to crunch all of these statistics together to enable new insights and actionable advice. Until then, nighttime wrist temperature is yet another metric you can potentially share with your doctor if you’re not feeling well, but it’s difficult to tell how useful it actually is.

For now, the biggest application for the Series 8’s temperature sensing will likely be fertility tracking. Apple says the Series 8 and Ultra can provide retrospective ovulation estimates and improved period tracking, potentially making the Series 8 a better choice for those who are interested in using it for family planning purposes. That information can be helpful because it provides users with data from their own bodies, rather than just making estimates based on the length of their cycle.

“But this actually gives you real life data because the time of ovulation can vary from person to person from month to month,” said Dr. Angela Bianco, MD, director of maternal fetal medicine at the Mount Sinai Health System. “Some people ovulate earlier in their cycles, others ovulate later in their cycles.”

Again, the Apple Watch isn’t a medical device and shouldn’t be treated as such. It also shouldn’t be used for contraception.

“I stress that women who are trying not to get pregnant should not use this because there can be errors in the data,” said Dr. Alexis Melnick, an OBGYN at NewYork-Presbyterian and assistant professor at Weill Cornell Medicine. “And you can have a cycle that is variable that may not follow the regular pattern.”

Apple says data stored in the health app — including female health statistics like ovulation estimates — is encrypted when your iPhone is locked with a passcode, Face ID or Touch ID. The same goes for data backed up to iCloud.

You’ll also want to make sure two-factor authentication is enabled for your iCloud account, which should be turned on by default. This ensures that health data is end-to-end encrypted, meaning Apple cannot read or access your data. To make sure two-factor authentication is on, open the Settings menu on your iPhone, tap your name and choose the Password & Security option.

While the Series 8’s extra health sensors are the biggest reason to potentially choose it over the SE, there are a few other extras to consider. The Series 8 can charge more quickly than the SE, as it inherits the fast-charging capabilities of the Series 6 and 7. The Apple Watch Series 8 charged from 70% to 80% in 10 minutes, while the SE charged from 70% to 77% over the same time period. For each watch, I used the included charging cable and the same power adapter plugged into the same outlet. Both watches have Apple’s new low power mode, which dials back certain features like automatic workout detection to extend battery life.

The Series 8, like the Series 6 and 7, also have Apple’s U1 ultrawideband chip. Ultrawideband is a wireless protocol for proximity sensing that’s become common in new flagship phones and smartwatches. Ultrawideband is primarily used for finding misplaced items and gadgets using Apple’s Find My service, or for unlocking your car with more precision than Bluetooth.

If you have a car that’s compatible with ultrawideband, for example, you can unlock your vehicle automatically as you approach it with your Apple Watch. Ultrawideband is said to be more secure and precise than Bluetooth when functioning as a key, which you can read more about here. It’s a nice perk, but it’s likely not a necessity for everyone. At least not yet.

The Apple Watch Series 8 and SE have a lot in common when it comes to core features and functionality. They can both track workouts, show iPhone notifications, provide high and low heart rate notifications and detect irregular heart rhythms. They also both come with safety features like emergency SOS, fall detection and car crash detection, the latter of which is exclusive to Apple’s 2022 smartwatches. The new Compass app, which includes a new feature to help you retrace your steps, is also coming to both watches as well as the Series 7, Series 6 and first-generation SE.

If you like using Apple Pay or syncing your Apple Watch to the treadmill at your local gym through GymKit, you’ll do just fine with either the new SE or the Series 8. They both have the same processor, support low power mode and run on Apple’s new WatchOS 9 update.

The difference really comes down to health tracking. By choosing the SE, you’ll miss out on the Apple Watch’s ECG app, blood oxygen sensor and new temperature sensor. Whether those features are necessary depends on what you hope to get out of your smartwatch. Do you primarily want to track workouts, or are you looking for deeper health metrics to share with your doctor?

You’ll also get a few perks that make the Series 8 a better iPhone companion, such as a larger always-on display, faster charging and ultrawideband support. Of those features, I personally find the always-on display to be most useful.

The Series 8 is the right option for those who want more health-tracking features and are willing to pay a premium for it. The Apple Watch SE is the best choice for those who are upgrading from an older watch or are buying an Apple Watch for the first time and just want an Apple Watch that feels new and has all of the core features. But if you have a recent Apple Watch like the Series 5, you can probably hold off on upgrading entirely unless you really want Apple’s new health upgrades.