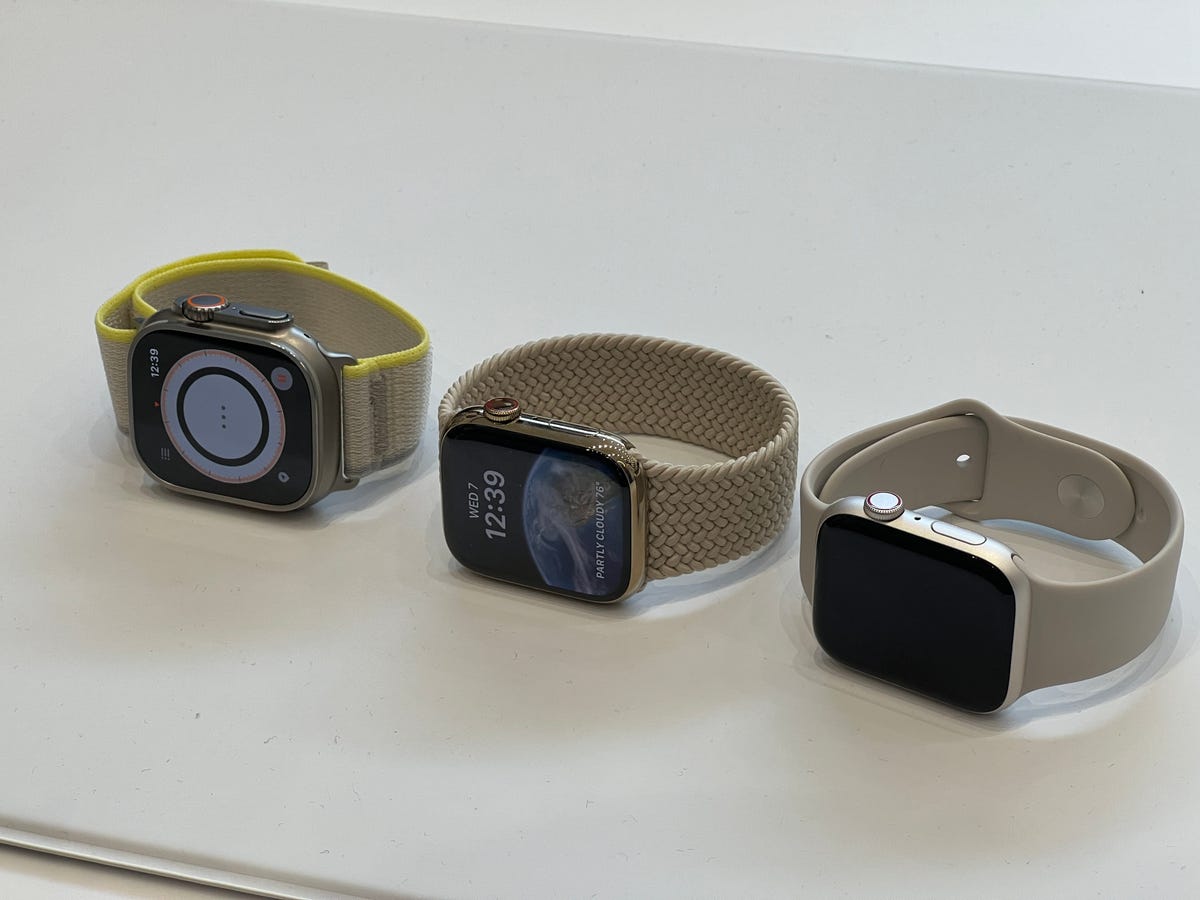 Apple’s watch lineup has been slowly expanding, much like the iPhone line did. Apple used to only launch one watch a year, but the Apple Watch SE introduced a more affordable model to the mix. The Apple Watch Ultra goes in the opposite direction: It’s more expensive, but unlike previous fashion-driven Edition watches, the Ultra is aiming for function… and endurance. Also, it’s by far the biggest Apple Watch of the lineup.

Next to the Apple Watch SE and Watch Series 8, the Ultra is like the Apple version of a Casio G-Shock. The new design pushes its crown and side button into an extended side part that, alongside the new watch’s bigger case and curved-with-flat-display contours, make it seem more James Cameron than any previous Apple Watch.

Preorder your Apple Watch Ultra from Apple with prices starting at $799. Devices start shipping on Sept. 23.

The new watch has a titanium case, sapphire flat front crystal, and 49mm case size with a brighter display (2,000 nits). There’s a new dedicated second button, an improved speaker and a clear, ruggedized design. Cellular is also the only model it comes in. It’s a lot of new features.

The Ultra’s biggest new feature, a significantly larger battery, is something the Apple Watch hasn’t had since it debuted. The typical Apple Watch battery life is about a day and a half; the Ultra promises more: 36 hours to 70 hours.

Wearing it on my big wrist, the Ultra still looks big. It’s not as heavy as I expected, though. The look, especially with its bold and function-oriented straps, is definitely bolder than I’m used to.

Last year, an expected watch redesign never materialized, although Apple did increase the watch screen size. The Watch Ultra does have a new look, including a flatter front and a bump-out side where the crown and side button are, plus a new programmable second button on the other side.

The buttons are easy enough to reach, although I’m not sure how I feel about the bumped-out digital crown. I can see why it was done, though: It looks like it’ll be easier to access when wearing gloves or gear underwater.

New straps include a wavy rubberized Ocean Band designed for fitting over wetsuits, a lightweight and slightly elastic Trail Loop that’s like a refined version of the existing Sport Loop, and an Alpine Loop nylon band with a titanium clasp that can ratchet into different fittings. All seem designed for specialized sports use. (The Ocean Band is wild-looking in yellow.)

The redesigned Compass app looks extremely fun, especially since it zooms out to different scales and allows waypoints and walk-back directions. The Ultra’s GPS has been enhanced with dual-frequency GPS (L1 and L5), which could make this a lot more accurate than competing GPS smartwatches.

Who is the Ultra for? It seems like it’s going for the Garmin watch-wearer market — someone who wants a dedicated running watch or a smartwatch that can last a whole weekend without a charge.

The extra cost, however, means it won’t be a watch most people opt for. Still, like the iPhone Pro and iPad Pro, the Watch Ultra’s features could end up being innovations that trickle down to the other Watch models over time.

The Ultra has some extra safety features, including a loud emergency siren that could be set to alert people if you’re down (which I didn’t test in Apple’s demo room). The water resistance is higher: WR100 and EN13319-certified for scuba diving.

There are some new apps for the Ultra: A new Oceanic Plus diving app is specifically made for the Watch Ultra that looks at tides and water temperature; it also records dive depths and metrics. Apple has its own depth-sensing app. The side button can work underwater to set waypoints, and it’s designed for use while diving too.

I’m not a diver or a hiker, but the battery life of the Ultra is what I’m most envious of. I don’t know how that performs yet, either, but multiday battery life on an Apple Watch is something I’ve wanted for years.

The Apple Watch Ultra isn’t the only device announced at the “Far Out” event. For more, read about everything else Apple unveiled, including the iPhone 14 and AirPods Pro 2.