Australia vs South Africa live stream: how to watch Rugby Championship from anywhere 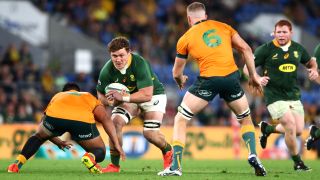 From being denied Australian citizenship in July, to kicking the Wallabies past the world champions in his first Test appearance in four years. Quade Cooper, take a bow. Was it a one-off, or can Dave Rennie’s men propel themselves closer to the summit before South Africa face New Zealand? Read on as our guide explains how to watch an Australia vs South Africa live stream for the Rugby Championship game from anywhere in the world – including for free in Australia.

It was a bitter pill to swallow for Jacques Nienaber, whose side outscored Australia by three tries to one, but just couldn’t get the ball between the sticks, Handré Pollard making a mess of two penalties and a conversion and Damian Willemse missing a conversion of his own, as Cooper kicked a perfect eight from eight.

After their maulings at the hands of the Kiwis, Australia won’t care a jot about the manner of the victory. They stayed in the game right until the end and took full advantage, dishing out a taste of their own medicine to the Springboks in the process.

With the All Blacks likely to make it four from four later, the title is all but out of the question for the Wallabies, but finishing above South Africa in the final standings? That would be something.

It’s a huge game, so follow our guide as we explain all the ways to get an Australia vs South Africa live stream of the Rugby Championship game wherever you are right now – starting with how to watch Wallabies vs Springboks for FREE in Australia.

How to watch Wallabies vs South Africa FREE in Australia

Aussie rugby fans can watch the Wallabies vs South Africa game without paying a penny thanks to Channel 9 and, more specifically, 9Gem.

You can also fire up an Australia vs South Africa live stream on the 9Now streaming service, which is completely free to use, too, and compatible with laptops, tablets, mobiles and an array of streaming services such as Apple TV, Chromecast, Fetch, PlayStation, Amazon Fire and smart TVs.

9Gem is showing all of the Wallabies’ Rugby Championship games, which means they’re all completely FREE to watch.

However, die-hard rugby fans might want to take a look at Stan Sport, which is live streaming every single Rugby Championship match, including this one.

If you’re currently out of Australia but want to watch a Wallabies vs Springboks live stream, you’ll need to get yourself a VPN as per the instructions below.

If you’re outside your country of residence – whether that be the UK or anywhere else – and try to start streaming the rugby via your native broadcaster, you’ll soon discover that you can’t, as it’s location restricted. But there is a way to tune in regardless.

Use a VPN to watch rugby from anywhere

Using a VPN is as easy as one-two-three…

1. Download and install a VPN – as we say, our top choice is ExpressVPN

3. Go to the broadcaster’s live stream – so if you’re from Australia, just head to the 9Now site or app

How to watch Australia vs Springboks: live stream Rugby Championship in South Africa

Rugby fans looking to watch the Australia vs Springboks game in South Africa can tune in via subscription service SuperSport, which is the place to watch every Rugby Championship game.

Kick-off is set for 9.05am SAST on Saturday morning, with the build-up starting at 8am.

And if you’re away from your TV for this game, you can also watch the action via the network’s streaming service for PC and Mac, as well as via SuperSport’s dedicated app.

Sky Sport is showing the Australia vs South Africa game in New Zealand, with kick-off set for 7.05pm NZST on Saturday evening. Coverage starts at 6.30pm.

Sky Sport subscribers can live stream the game via the Sky Go service, while cord-cutters and anyone else can try the Sky Sport Now streaming-only platform – where a weekly pass costs just $19.99. The service is showing every Rugby Championship match.

How to watch Australia vs South Africa: live stream Rugby Championship in the UK

In the UK, live coverage of the Australia vs South Africa game comes courtesy of Sky Sports, which is showing all of the Rugby Championship action.

The game kicks off at 8.05am BST on Saturday morning, with coverage getting underway at 7.55am.

How to watch Australia vs South Africa: live stream Rugby Championship in the US

Dedicated rugby streaming service FloRugby has the broadcast rights to show the Australia vs South Africa game in the US.

You’ll need to be up seriously late though, with the Wallabies vs Springboks set to kick-off at 3.05am ET / 12.05am PT on Friday night/Saturday morning.

How to watch Australia vs South Africa: live stream Rugby Championship in Canada

In Canada, you can live stream Australia vs South Africa courtesy of TSN, which is showing every Rugby Championship game online.

But with kick-off set for 3.05am ET / 12.05am PT on Friday night/Saturday morning, prepare to lose some sleep.

The game is being shown online-only, and the good news is that the TSN Direct streaming service costs just $7.99 a day or (much better value) $19.99 a month and can be purchased by anyone – regardless of whether you have the channel as part of a pay TV package in the country or not.