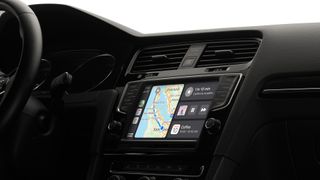 Apple CarPlay has been with us for almost six years now. Launching with iOS 7.1 back in 2014, CarPlay revolutionized the car infotainment experience, doing away with the often sub-par software created by car manufacturers themselves, and replacing it with an interface run by your iPhone.

CarPlay makes it easy for iPhone users to access apps like Phone, Maps and Messages via their car’s own touchscreen dashboard display, working much like Android Auto does for Android users.

CarPlay apps from Apple and third-party developers are redesigned so that they are safe to use while driving. This often means their user interfaces are simplified, with less text and fewer icons to distract you from the road ahead. Instead, Siri is used by many CarPlay apps – for example, to read out incoming iMessages, and dictate your replies.

You can’t play games or watch video with CarPlay, even while parked, but the system has gained new features over the years to make better use of the ever-larger displays fitted to most cars. And, while the app selection is closer to dozens than thousands, there are still plenty of CarPlay apps to install, keeping you entertained, connected, and informed while behind the wheel.

We’ve gathered up some of our favorite CarPlay apps, spanning the system’s cornerstones of navigation, entertainment, and communication. So grab some of our suggestions below and give your car’s touchscreen an upgrade.

Unless you’re an Apple Music obsessive, you’re going to want to access an alternative music app while driving. Thankfully, CarPlay works with pretty much all of them, including Amazon Music, Google Play Music, Tidal, and of course Spotify.

Like all CarPlay apps, Spotify has a clean and simple interface for browsing through your music collection by playlist, artist, album, or song. There are also options to browse for new music, and Spotify Radio, which serves up music Spotify thinks you might like based on what you normally listen to.

You can always listen to the car radio without CarPlay, but we reckon BBC Sounds is a better option. As well all of the Beeb’s digital stations, you can use Sounds to listen to podcasts from the like of Louis Theroux, previously-played shows saved in the archive, and anything you have already downloaded onto your phone.

The CarPlay version of BBC Sounds also gives access to the Browse section for discovering new music, podcasts, and other recommendations. As well as the normal play and pause controls, the CarPlay interface lets you skip forward or backwards by 20 seconds – handy if you zoned out of a podcast, or want to skip the news segment of a downloaded radio show.

CarPlay of course has access to Apple’s own iMessage system, but thankfully WhatsApp is available too. Notifications come through to the CarPlay home screen just as they do with iMessages, appearing briefly at the top of the screen to show you which contact or group chat they are from.

However, like all the CarPlay versions of messaging apps, incoming messages cannot be read from the screen. Instead, Siri can read them out to you with a tap of the display, or you can save them for later if you’d rather your passengers didn’t hear the latest developments from that stag do group chat you forgot to mute. Siri can also be used to dictate replies, just as with iMessage.

Apple Maps is available through CarPlay by default, but if your navigation preferences sit on the other side of the fence, Google Maps is here to help.

Simplified and pared down, Google Maps for CarPlay is still the navigation system you know and love, complete with live traffic, automated rerouting to avoid heavy traffic, and the dulcet tones of the Google Assistant telling you where to go.

Google Maps for CarPlay has also been updated to appear in the new Dashboard view of CarPlay, which shows your navigation, plus music controls (and more, if the car has a larger display) all at once.

If you prefer your routing crowd-sourced, then you’ll want to install Waze. Owned by Google since 2013, Waze is a navigation app, but one which relies heavily on crowd-sourced information to help warn you of incidents and traffic jams, and offer handy alternate routes.

Although simplified for the CarPlay experience, Waze still retains its distinctive interface, complete with icons to show where fellow users have reported traffic and other issues on your route.

Unfortunately, while Google Maps now appears on the Dashboard screen, Waze doesn’t at the time of writing, so for now it can only be viewed full screen in CarPlay and not alongside your music playback controls. Hopefully this will be fixed soon.

Buying dedicated navigation systems from TomTom might not be a thing anymore, but the routing giant is still very much in the race. The firm’s Go Navigation app for iOS is CarPlay-friendly, with detailed offline maps saved on your phone, live traffic, and speed camera locations.

TomTom’s maps are customizable, showing only the information you need, and they are updated weekly to help account for routes altered due to roadworks, and new speed limits. Like Waze, TomTom GO Navigation doesn’t yet work on CarPlay’s dashboard page, but since Google Maps now does, it’s likely only a matter of time before others follow suit.

The go-to place for audiobooks, Amazon-owned Audible has a CarPlay app. Much like all of the other audio apps we’ve included here, Audible’s interface is incredibly simple. You are shown your library of books, then it’s just a case of tapping on one to carry on listening from where you left off.

Playback controls take up the whole screen, making it easy to tap without being distracted from the road. It’s also worth noting that all audio playback controls on CarPlay apps look the same, in a further bid to simplify the whole experience.

An all-in-one audio app, iHeart is a subscription service that includes a huge music library, plus thousands of live local and national radio stations, and access to all popular podcasts.

Simplicity is again the name of the game when it comes to the CarPlay experience. The app includes pages for Recents, Radio, Playlists, and Podcasts. Radio stations are filtered by genre to make your favorites easy to find, and there’s a recently played section to get back to your most recent podcasts with a tap.

A US-centric media service, iHeart is free with adverts, or available as an ad-free subscription from $5.99 / AU$8.49 per month (with no UK app at the time of writing).

We’ve stuck mostly to third-party apps for this article but wanted to include Apple Podcasts as an exception. For millions of iPhone users it will likely be their go-to podcast app, so thankfully Apple has made it work well with CarPlay.

As with all other media apps, the CarPlay interface has menu icons along the top, simple lists of content, and a full-screen media control page with large play/pause and skip forward/back controls. There’s also a browse section to help you discover new podcasts while on the road.

Widely regarded as one of the best podcast apps out there, Pocket Casts is an all-singing, all-dancing podcast app for iPhone. It has advanced playback controls, automatic downloading of new episodes, an iPad interface, and compatibility with AirPlay, Chromecast, and Sonos.

But, as with all apps mentioned here, things are massively simplified when CarPlay gets involved. This is no bad thing, of course, but means the menus and interface look almost exactly the same as every other media app. That’s the thing with CarPlay; Apple only grants developers access to a handful of very simple interface designs to use, leaving it down to app content to help set them apart.