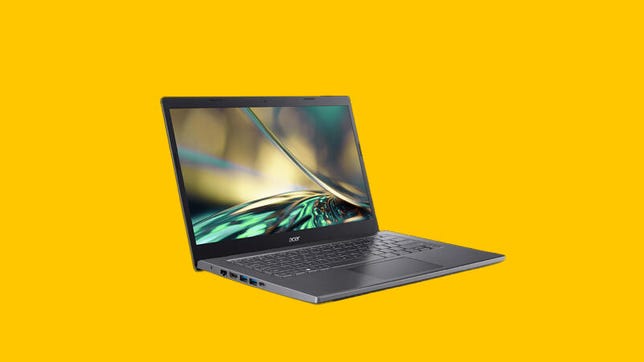 Laptop sales happen year-round, but some of the biggest discounts are happening now for Black Friday. Although the shopping holiday doesn’t officially kick off until later this week, if someone on your holiday shopping list is asking for a new laptop, it’s worth starting earlier this year.

There are plenty of Black Friday discounts already available that can save you some money (quite a lot in some cases). You’ll find great deals on laptops with Intel’s previous 11th-generation (and very capable) Core processors and chips from AMD’s previous Ryzen 5000 series. You can also save on newer models with Intel’s current chip family, the 12th-gen Core chips and AMD’s Ryzen 6000-series processors.

Acer knows how to put together good laptops at low prices. The Aspire 5 is one of our favorites for the home that’s also portable enough for the occasional trip. It’s a 15.6-inch laptop with a 1,920×1,080-pixel resolution powered by an AMD Ryzen 7 5700U CPU and 16GB of RAM. You also get a 512GB solid-state drive. Most laptops at this price supply only 8GB of RAM and a 256GB SSD. Plus, it has a large port assortment including Gigabit Ethernet and an HDMI out.

The HP Pavilion x360 14 has a premium look and feel at an affordable price. But even for a Pavilion, this is a superb deal. This 14-inch, full-HD, two-in-one laptop weighs less than 3.5 pounds and has the latest 12th-gen Intel Core i5-1235U processor, 8GB of RAM, a 512GB solid-state drive and integrated graphics. Extras include a fingerprint reader for fast sign-ins and a 5-megapixel webcam for sharper, more detailed video chats.

We often call the MacBook Air the most universally useful laptop you can buy. Although it was recently updated with a larger display and Apple’s latest M2 chip, it also got a higher starting price. The good news is the M1 MacBook Air is still available and remains a fantastic choice for most people in need of an ultraportable everyday laptop. For a base price of $999, and often on sale for at least $100 less, it’s a great value, considering these tank-like laptops can last for years. Right now, though, you can get one for nearly $200 off.

HP’s Envy line falls just below its ultrapremium Spectre models. That means with laptops like this 15.6-inch two-in-one, you still get a lot of higher-end features like a 5-megapixel webcam with a privacy shutter and an aluminum body, but the internal components skew more toward power efficiency than the fastest possible performance. Make no mistake, though, this Envy x360 should deliver great performance with a 12th-gen Intel Core i7 CPU, 16GB of memory and a 512GB solid-state drive for just $800 — $300 off. There’s also an AMD version with half the memory and storage for only $500 which should be plenty for average home office use.

The second generation of Samsung’s sleek Galaxy Book Pro laptop bumps you up to 12th-gen Intel Core processors and supplies a brighter AMOLED display and improved webcam. This model features a 13.3-inch display and a 1080p webcam, which produces a better image for video calls than a run-of-the-mill 720p camera. Like the previous-generation models, the Galaxy Book 2 Pro laptops are designed to work seamlessly with Galaxy phones and tablets. The core specs of this model are a 12th-gen Core i7 CPU, 16GB of RAM and a 1TB SSD.

The baseline model of the 14-inch MacBook Pro costs $1,999 and features an eight-core M1 Pro chip, a 14-core GPU, 16GB of RAM and a 512GB solid-state drive. You can save $399 on it right now at Amazon — that’s the biggest discount we’ve seen yet for one of Apple’s most useful and powerful MacBooks. It’s an unquestionably great deal, but an M2 Pro update is expected soon — likely before the end of the year.

Most 17-inch laptops are gaming monsters. The LG Gram 17 is neither a gaming laptop nor a monster. It lacks dedicated graphics to drive 3D games but is only 0.7 inch thick and weighs less than 3 pounds, making this 17.3-inch desktop replacement roughly the same weight as your typical 13.3-inch ultraportable. The spacious 2,560×1,600-pixel display is powered by an 11th-gen Core i7 CPU, 16GB of RAM and integrated Intel Iris Plus graphics. You also get a roomy 1TB SSD for storage and can save more than $350 on it right now.

The highlight of this 16-inch model from Asus is its 4K, 16:10 OLED display. An OLED panel supplies incredible contrast and vivid colors, and this one should also provide a sharp picture with its fine 3,840×2,400-pixel resolution and 16:10 aspect ratio, which provides more room vertically than a widescreen 16:9 panel. It’s rare to find an OLED panel at this price, especially with 4K resolution. Inside, it features an octa-core AMD Ryzen 7 5800H CPU along with a sufficient 16GB of RAM and 512GB SSD. You can save $100 on it right now at Newegg.

What should you look for in a laptop deal?

One of the biggest things to consider is which laptop configuration is on sale. Often, with the best laptop deals, only a specific version of the laptop is on sale and making any changes to it could affect the price. This means that sometimes you find the 512GB model is actually cheaper than the 256GB option, or a similar situation.

When are the best laptop deals available?

Generally, you’ll find the best laptop deals during back-to-school shopping time in late summer or early fall and a bit later in the year during annual Black Friday sales events. There are laptop deals available throughout the year, but if you’re looking for the best deal and can afford to wait a little, these are the best times of the year to buy one.

You can usually find deals across a variety of retailers when it comes to laptop sales. Best Buy, Amazon, Newegg and other retailers tend to offer sales on more specific models while manufacturers like HP, Lenovo and Dell usually host larger sales that cover more models and configurations. If you’re looking for a specific model, you’ll want to keep checking back weekly for the latest set of deals.

We reviewed the 16-inch Spectre x360 (pictured) and called it a “big, luxurious two-in-one for creatives.” The 13.5-inch that’s currently available with a $500 discount at Best Buy has all the stuff that makes the bigger model great but at a more portable size. This includes a 12th-gen Intel Core processor, a 3K OLED panel with a tall 16:10 aspect ratio and a premium design. Inside is a 12th-gen Core i7, 16GB of RAM and a 1TB SSD. And it’s a pen-enabled two-in-one so you can use it as a tablet for drawing or note-taking.