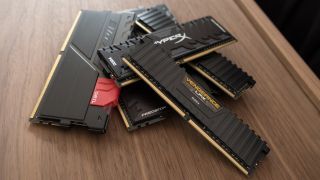 An extra bit of memory can breathe all new life into your computer, and make heavy tasks like gaming and multi-tasking a breeze. With enough RAM, you won’t need to worry about leaving a couple extra browser tabs open. So why don’t you take a look at our guide to the best RAM prices and deals.

Even if you were thinking of buying a brand new Mac, MacBook or pre-built PC instead of building your own setup this year, you can often save a bit of cash by not paying extra for an upgraded RAM model. This can work out quite an expensive way to add memory, and instead it’s far cheaper to purchase RAM separately, especially if you can find the best RAM deals like we have found below.

DDR4 RAM is the fastest memory that came on the block just a few years ago. At first, it was prohibitively expensive for anything but the most extreme gaming PCs, but now you can find it in many mainstream laptops or desktops. The Corsair Vengeance LPX is among one of the most solidly reliable kits of RAM you can purchase. It’s low-profile form factor makes it an easy fit for most PC builds, and its 2,400MHz starting speed is plenty quick too.

DDR4 RAM might be the fastest and hottest memory on the market now, but more than a few PCs aren’t designed with the right slot for it. Fear not, though, with DDR3 RAM going on its way out, you’re bound to find even more amazing deals on it, like this set of Kingston HyperX Fury memory. Like the Corsair kit above, Kingston makes solidly reliable RAM and they also feature low-profile designs to work with most PC builds.

Premium performance at a reasonable price

Gaming requires a higher-class of memory, and this usually means higher frequencies, bigger capacities and a better cooling solution to keep it running, especially if you’re overclocking it. With all this in mind, you should check out the Corsair Vengeance RGB, which features a taller heatsink, a faster 3,000MHz frequency and RGB lighting over the DDR4 set of Vengeance LPX memory we pointed out earlier.

The most affordable way to upgrade your Mac systems

Adding extra memory to any Mac is notoriously expensive. Instead of throwing Apple a few extra hundred bucks, you could simply double or even triple the amount of RAM on your system with an inexpensive kit. Crucial is another proven RAM maker, and you’ll definitely want to check out its 16GB or 32GB memory kits that will cost far less than the corresponding upgrades provided through the Apple Store.

MacBooks aren’t the only laptop that you can add extra memory to. As long as they aren’t glued together, like a Surface Laptop, upgrading your RAM is one of the easiest things you can do to improve the performance of your notebook. TimeTic makes relatively inexpensive kits of Hynix IC RAM that could seriously bump up your memory capacity.

RAM is an acronym for Random-Access Memory. It is one of the fundamental pieces of the computing puzzle alongside the processor (or CPU) and classic storage (usually coined as ROM for Read Only Memory).

RAM is needed in order to facilitate data transfer to and from your system storage (can be hard disk drive or solid state drive). The processor is the one that does the compute, the calculations etc and just next to it sits the cache, which is a super fast version of RAM but only available in tiny amounts (up to a couple of hundreds of MB at most).

Then comes RAM (usually around 16GB on standard computers) and beyond that system storage. The further they are from the processor, the cheaper they are per unit storage and the slower they become.