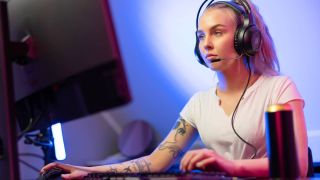 Even though wireless headphones have taken off in recent years, wired gaming headsets remain incredibly popular for a number of reasons. A wired gaming headset gives you far more flexibility than a wireless pair could ever hope to achieve (you’re not restricted by Bluetooth, needing a dongle, or being unable to connect to specific devices), and microphones tend to sound better than their wireless counterparts, with greater fidelity.

Another advantage that wired headphones often have over their wireless counterparts is that if your device has a headphone jack, your favorite pair of cans will work on it. You also don’t need to worry about any audio latency, interference, connection issues, or having to charge your headset after every couple of play sessions, which is a huge relief.

There’s a pleasing simplicity to owning a pair of wired gaming headphones, then, but which pair should you choose? While you can’t really go wrong with any of the selections we’ve rounded up below, we’ve made your purchasing decision a little easier by placing them into certain categories like ‘best PS5 wired headset’.

Yes, even though the Sony Pulse 3D Wireless Headset is a… well, a wireless headset, it can also be used wired. You don’t need to turn the headset on, either, so if you run out of battery when playing wirelessly it isn’t a problem. The microphone also works when connected via the DualSense controller’s audio jack, so you really get the best of both worlds with the Sony Pulse 3D Wireless Headset.

Of course, we wouldn’t recommend Sony’s official PS5 headset if it didn’t sound great, but thankfully it does. It’s specifically designed to make the most out of the system’s 3D audio, and it shows in certain titles like Returnal and Demon’s Souls. A great option for wired and wireless, then, the Sony Pulse 3D Wireless Headset ticks both boxes for less than $100 / £100.

Microsoft has announced that it will release a wired version of its superb Xbox Wireless Headset, but for now, our pick for Xbox users is the Epos H3. The Epos H3 is one of our favorite wired gaming headsets as it’s incredibly comfortable, has a crisp and clear audio profile, and comes with an exceptional microphone.

It also hits the sweet spot of being under $100 / £100, though the proprietary 3.5mm headphone cable could be a sticking point if you lose or damage it. Still, there are few wired headphones that can compete with the Epos H3 when it comes to price and performance, and we’re pleasantly surprised by how comfortable they are every time we put them on our heads.

–Mic can be easily misplaced

You don’t have to blow your entire budget on a gaming headset to get top-quality sound, as the Corsair HS50 so amply proves. For under $50 / £50, the Corsair HS50 delivers terrific audio, multi-platform compatibility, and an excellent microphone to boot.

We were particularly impressed by the headset’s build quality, which can usually be iffy at this price point. The microphone can also be detached if you wanted to use the Corsair HS50 outside the home, and thanks to its understated design, you won’t look like a typical gamer on the go.

Having lighting fast reaction times is one thing, but if you can’t hear where your opponents are coming from, good luck getting the kill. The Fnatic React Plus will thankfully ensure that you’re never caught unawares, however, as they provide pinpoint sharp sound that lets you determine where every enemy is hiding.

While the oval earcups won’t be for everyone, and we had a few build concerns, the Fnatic React Plus is worth it due to the incredibly clear and detailed sound it provides, choice of leather and fabric earcup pads, and excellent microphone.

If you’re a player who isn’t interested in chatting online and simply wants the best sound quality possible, the Beyerdynamic Tygr 300 R might be what you’re looking for. The headset features an open-back design, which provides a wider sound stage and great stereo imaging. What that basically means is that your games will sound more atmospheric and immersive than ever before. The Beyerdynamic Tygr 300 R’s are also a great choice for music lovers, something which most gaming headsets don’t manage too well.