Most people like the concept of a supercompact portable Bluetooth speaker that travels well and weighs just a few ounces so that you can play your favorite music on the go. But if you’re looking for monstrous sound with thumping bass, you have to step up to one of the jumbo models, which are sometimes referred to as wireless boom boxes, although they don’t always look quite like your boom box of yesteryear.

The speakers on this list weigh a minimum of 6 pounds (2.7 kg) and some weigh a lot more than that, and the powerful higher-end models require a bulky AC adapter — not just a standard USB phone charger and cable — for charging. They also have built-in straps or handles for transport. All of them are designed to play a long time at moderate volume levels on the go. But if you want to go loud, the battery life drops to more like 3 to 5 hours.

Since these are designed for everything from camping trips to tailgating to pool and beach parties, they’re all fairly rugged, with most offering a good degree of water resistance and several being fully waterproof. I’ve personally listened to all of these (or, in the case of the Soundcore Trance Go, its nearly identical sibling speaker).

JBL’s new-for-2021 PartyBox 110 packs some serious punch and delivers bigger sound than some of the portable boombox speakers on this list, including JBL’s own Boombox 2 (see below). There’s an integrated handle for toting the speaker, but the PartyBox 110 is pretty hefty, weighing in at 23 pounds and measuring slightly more than 22 inches tall. You can it up vertically as shown in the picture above or place it horizontally, as it has rubber feet on both sides of the speaker.

It’s rated for up to 12 hours of playback time at moderate volume levels and has a redesigned light show that syncs to the beat of your music (you can customize the light show from the speaker itself or use the JBL PartyBox companion app).

The speaker has Bluetooth or a wired USB connection and there are guitar and mic inputs. It’s also worth noting that speaker is IPX4 splash-proof and you can wirelessly link two PartyBox 110 speakers together for stereo sound. I didn’t test the stereo mode, but I was impressed with the sound of a single PartyBox 110 — it puts out lots of well-defined bass with good overall clarity in the highs and mids — and I suspect that pairing two of these together would be pretty awesome.

I also liked how the speaker has no external AC adapter brick and only requires a cord for charging (the power adapter is in the speaker). For longer parties during which you’re really cranking the tunes, you’d want to plug the speaker in if possible. But it does deliver enough volume to fill a spacious living room with sound and also plays loud enough for a small pool or beach party.

The upcoming PartyBox 710 ($800) is a massive party speaker that has integrated wheels and requires a power source to operate; it does not have an integrated rechargeable battery. This is your best bet if you want a portable speaker that can deliver big, quality sound and operates on battery power. To be clear, this offers bigger and better sound than the JBL Boombox 2 — but it is harder to carry around.

Anker’s Soundcore Motion Boom is what I’d call a mini portable boom box speaker. It’s kind of a poor man’s version of JBL’s well-regarded Xtreme 3 speaker, which lists for $350. Equipped with a handle and weighing a little over 4 pounds, the speaker reminds me of one of those giant flashlights or “floating lanterns” that were in vogue about 30 years ago. For the record, the Motion Boom actually does float and it’s got an IPX7 waterproof rating.

Anker says the Motion Boom delivers “huge stereo sound” and, yes, it plays pretty loud and has a decent amount of bass with reasonable clarity — but I wouldn’t call it huge and there’s not much stereo separation (I kept the bass boost on at all times because the speaker sounds better that way.) It can’t compete against bigger and more expensive speakers like JBL’s Boombox 2 ($400) and Ultimate Ears’ Hyperboom ($400), but it packs a lot more volume and punch than more compact Bluetooth speakers like JBL’s Flip 5 that cost around the same. It also travels well, so it’s ideal for a beach excursion or a little tailgating. It also can be used as a backup battery to charge your smartphone or other mobile device.

If you want something at half the size with slightly more refined sound, check out the Anker Soundcore Motion Boom Plus.

JBL’s second-generation Boombox 2 doesn’t really look different from the original. But it’s more energy-efficient, with a new Bluetooth 5.1 chipset. Also, the speaker weighs about 1.5 pounds more (13 pounds or 5.9 kg), which means the added weight went into other components besides the battery, which is the same capacity.

The big difference in the sound between the Boombox 2 and the original is the bass. It goes deeper and has more punch to it. While the power rating is a little higher for the Boombox 2, its top volume is about the same as the original. It sounds fuller and more dynamic at its top volume. Unlike the original, it doesn’t have indoor and outdoor modes. You can link up wirelessly to the latest JBL Bluetooth speakers, but sadly you can’t link to the original Boombox.

Like the UE Hyperboom (see below), this has a USB-out port that allows you to charge external devices like your phone, and there’s also an analog audio input if you want to go wired and connect a device without using Bluetooth connectivity (the Hyperboom adds an optical digital input).

For outdoor use, I like the design of the Bluetooth Boombox 2 better than UE Hyperboom. It’s easier to carry around and just looks more like an outdoor speaker. It’s also fully waterproof (IPX7). However, while they both play loud and deliver plenty of bass, the Hyperboom sounds more natural and has a bigger soundstage with better overall clarity and great sound.

Sony’s SRS-XG500 is the most direct competitor to the JBL Boombox 2. They’re similarly priced and sized, with both featuring an integrated handle. The Sony is a little larger but weighs slightly less at 12.34 pounds (5.6 kg).

I went back and forth comparing the sound of the two speakers. While I liked the JBL’s sound a bit more because it came across as sounding a little clearer with better detail, the Sony pumps out a lot of bass — it has a warmer, boomier sound that some people may prefer.

It’s IP66 water-resistant and dustproof, meaning it can take a sustained spray of water but it can’t be fully submerged. You also get a mic/guitar rear input and dual USB-out ports for charging your devices. (The speaker has its own power adapter; you can’t charge it via USB-C.) Battery life is rated at 30 hours at moderate volume levels, which is very good. Crank your tunes and that number drops substantially.

At night, you can light up the speaker with the LED light strips that ring the inside of the bass ports and use the Fiestable app to control the LEDs. The Sony Music app allows you to tweak the sound profile. Additionally, you can link the speaker with other Sony Bluetooth speakers to augment the sound.

For outdoor use, I give the nod to the JBL’s design. Both of these weigh 13 pounds, but the JBL is a little more natural to carry around. It’s got the handle, the tubular design — it looks like it belongs outdoors. The Hyperboom’s got a thick rubber strap and it kind of feels like you’re carrying a big pitcher of something really solid. It’s boxy and understated, and it looks a little more at home indoors.

The Hyperboom is splashproof with an IPX4 rating while the Boombox 2 is fully waterproof with an IPX7 rating. (I put them out in the rain and they both survived without issues.) Like the Boombox 2, this has a USB-out port that allows you to charge devices like your phone and it also has analog audio input if you want to go wired and connect a device without using Bluetooth. However, the Hyperboom adds an optical digital input. That means you can connect it to a TV, PC or game console with an optical output. You can also toggle between two Bluetooth connections and it has a built-in microphone that calibrates the speaker’s sound to wherever it is, inside or outside.

The Hyperboom also is the better-sounding portable Bluetooth speaker overall. It has a wider soundstage with slightly more bass and clarity. It also sounds a little more natural.

If you can afford it, you can link up two Hyperbooms and create a stereo pair. You can also link it wirelessly to the latest UE Bluetooth speakers to spread out the sound across a wider area.

Last year I reviewed Anker’s Soundcore Rave Neo party speaker and gave it high marks. The Trance Go is essentially that speaker without the integrated LEDs that allow you to create a mini light show. It costs right around $100, plays loud for its size (it’s a medium-size speaker that weighs about 6 pounds) and has a built-in handle that makes it easy to tote around. The speaker is fully waterproof and can get up to 24 hours on a single charge at moderate levels. A USB port allows you to charge devices. Also worth noting: For those who want more expansive sound for streaming music, you can link multiple Trance Go speakers.

If you do want a light show, Anker also has the Soundcore Trance. However, it costs $50 more.

If you don’t want to get something quite as big as the JBL Boombox 2, the Xtreme 3 weighs a good deal less but is still large by Bluetooth speaker standards and puts out a lot of sound (though not as much as the Boombox 2). Instead of a built-in handle, a detachable shoulder strap is included.

Like JBL’s smaller Bluetooth speakers, the Xtreme 3 is a versatile boom box that can be stood up vertically or placed horizontally. Though a tad bigger than the Xtreme 2, at first glance it doesn’t look much different from the previous model, but it does have upgraded sound with slightly better bass and clarity while actually weighing slightly less. Here are the key differences between the two speakers, according to JBL: 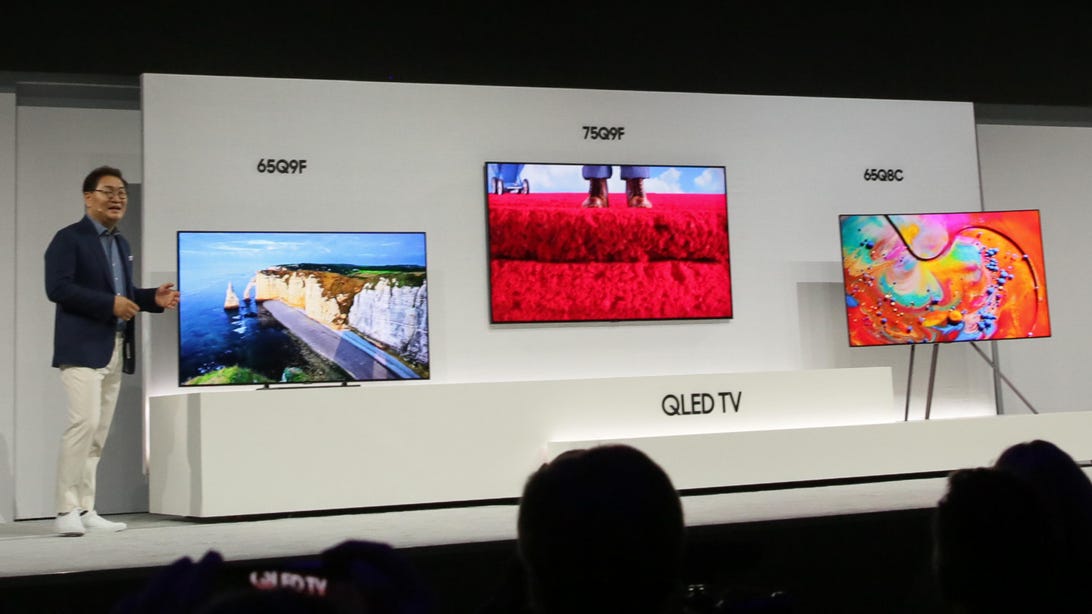 Apple’s AirPods 3 vs. AirPods Pro: All the major differences