With the latest version of Chrome OS (milestone 102), Chromebooks will now show a pop-up notification when the cable you attach doesn’t support an external display or can’t deliver the full performance needed. This feature will be supported on Chromebooks with 11th- or 12th-gen Intel Core processors with USB4 or Thunderbolt USB-C ports to start with more to come, Google said in its blog post announcing the update.

Also coming with the latest Chrome OS updates is support for Google Cursive, its web app designed for writing on Chromebooks. I tested it out when the app launched exclusively on the HP Chromebook x2 11, and it has some handy shortcuts to make note-taking (and correcting mistakes) much easier. For example, you can erase something just by scribbling over it.

Cursive will be preinstalled on all eligible Chromebooks going forward. But you can download it and try it out with earlier USI pen-enabled Chromebooks now, too.

Lastly, the docked magnifier on a Chromebook is now customizable. This feature, which can be switched on in your Chromebook’s accessibility features, gives you a horizontal split-screen view of your display. The top portion is a magnification of what you hover over on the bottom portion. The horizontal bar that separates the two views can be dragged up and down letting you resize the amount of the screen being magnified.

The Last Dance finale: Episodes 9 and 10 start time, schedule, how to watch without cable Create a deepfake of your own voice with this podcast tool 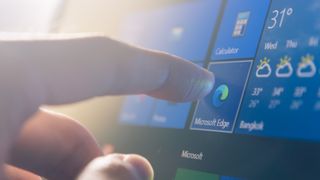