Chromecast with Google TV HD Review: Raising the Bar This cheap streamer might lack 4K, but it's got everything else you'll want. 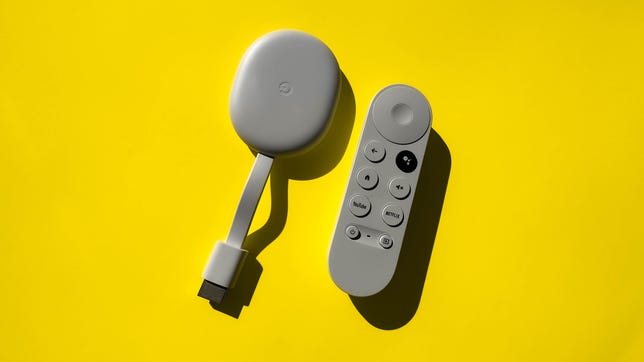 Few things give me more pleasure than when inexpensive products look, feel and behave like they are worth more than what I paid. So imagine my delight when I opened the entry-level Chromecast with Google TV HD and found a sleek, oval-shaped player that’s indistinguishable, aside from its white color, from its more-expensive, 4K-capable sibling, the Chromecast with Google TV.

The similarities don’t stop there. As its name implies, the Chromecast with Google TV HD is capable of streaming at a maximum of 1080p resolution and doesn’t have Dolby Vision, but otherwise the player comes with almost all of the same features — including an identical remote — as those found on the 4K model. This result is an attractive, easy-to-use, full-fledged device that completely resets the bar for a budget, HD-only streamer.

That said, 4K streaming devices don’t cost much more money than the Chromecast with Google TV HD, and will work just as well on non-4K televisions. This means something like the Roku Streaming Stick 4K, Express 4K Plus or the actual 4K Chromecast might be a better value in the long run, even if you don’t currently have a 4K TV. If you do decide to upgrade your TV in the future, your streaming device would then be able to unlock the best capabilities of that new television and display content in the higher quality picture settings.

Many entry-level streaming devices skimp on hardware features in order to sell their players at a lower price. For example, the remote that comes with Roku’s entry-level streamer, the Roku Express, lacks voice control or the ability to adjust the volume, never mind being able to turn the TV on or off. This means that you need both the original TV remote and the Roku remote to use that device. Amazon’s Fire TV Lite isn’t much better. It offers Alexa support, so you can use your voice to control the TV, but it still lacks physical volume, mute and power buttons.

By offering the same remote as the Chromecast with Google 4K, the HD model brings a whole different level of functionality to its inexpensive streaming device. Not only did it work seamlessly to control my 2020 Samsung TV’s power, volume and inputs, but it also comes with a button to access the Google Assistant. I can’t tell you how much of a game-changer this is for me. I absolutely loathe having to use more than one remote at a time — it’s cumbersome and I always find myself grabbing the wrong one. The Chromecast with Google HD fixes this problem by letting me use just one, small, easy-to-read remote.

The remote isn’t the only upgrade on this player. It has the ability to cast pictures and videos from Google Photos, and take Google Meet video calls from your Apple or Android phone to your TV. It also maintains the same plug-and-play design and is even made with 49% recycled plastic, according to Google.

But it’s also fast. Netflix loads from the home screen in a second, as does Hulu. HBO Max took a little longer to load, at around 5 seconds. Navigating around the platform is also fairly zippy. I moved easily between apps and browsed the home screen with hardly any lag.

Google TV is cluttered and has questionable search capabilities

Aside from its inability to stream in 4K HDR, the only thing holding this device back ever-so-slightly is the Google TV platform itself. The top of the homescreen is filled with five rotating slots of various show or movie suggestions, mixed with an ad for NBC’s Peacock service. Below that is a row filled with Top Picks for You, followed by all my downloaded apps. Scrolling down further gives you Popular Movies and Shows, Dramas, another Peacock ad and Recommend YouTube Videos. Look, I know that some people really love seeing cross-app content in this way, but I find it too cluttered and overwhelming. I much prefer the cleaner layout on Roku. I just want to be left alone so I can get straight to my apps. And if I don’t know what to watch, I’ll go to the search bar and find something myself, thank you very much.

The search on the Chromecast with Google TV is also not nearly as good as Roku’s. Attempting to find and download the BritBox app was a lesson in futility. First, I used Google Assistant to search for “BritBox.” Instead of the app, I got a row of YouTube videos reviewing the service. Searching under the Apps tab at the top of the home screen gave the same results. I tried again by physically typing “BritBox app” into the search bar, only to have Google Assistant tell me that it “isn’t available on this TV, but here are some other apps that are.” Of course, the first “related app” was the one I had been looking for all along. It’s currently downloaded onto my home screen, but Google search still can’t find it when I ask for it. The whole process is ridiculous and is not something I’d expect from a Google-run device, but here we are. Needless to say, I found the app in two seconds on my Roku.

Searching for something to watch was less of a hassle, though it didn’t always give me the results I wanted. Asking for football gave me football-related YouTube videos and a few football movies, but no actual games. However, I was able to launch apps like Netflix, as well as find individual shows — such as The Case Against Adnan Syed — with ease.

Platform and search quibbles aside, the Chromecast with Google TV HD is far and away the best HD-only, entry-level streaming device you can find. If you’re looking for a cheap streamer for your HD TV, this is the one to get.

As I mentioned at the top, however, it might actually make more sense to spend a little extra money and opt for a 4K streaming device instead. Our current favorites, the Roku Express 4K Plus or the Dolby Vision-compatible Roku Streaming Stick 4K, tend to go on sale for under $30 around the holidays. So while the Chromecast with Google TV HD is great, it might be a good idea to keep your eye out for sales on 4K streamers instead.